The 2021 Catmasters at Texoma – How They Fished

The 2021 Catmasters at Texoma Catfish Tournament presented by SeaArk Boats and B’n’M Poles attracted 103 teams to Lake Texoma at Durant, OK. Two-hundred thirty-six anglers competed in the two-day event on January 22-23. By the end of the two days, 97 fish weighing 3,094.55 pounds had come to the scales and 23 big fish had been tagged for research. 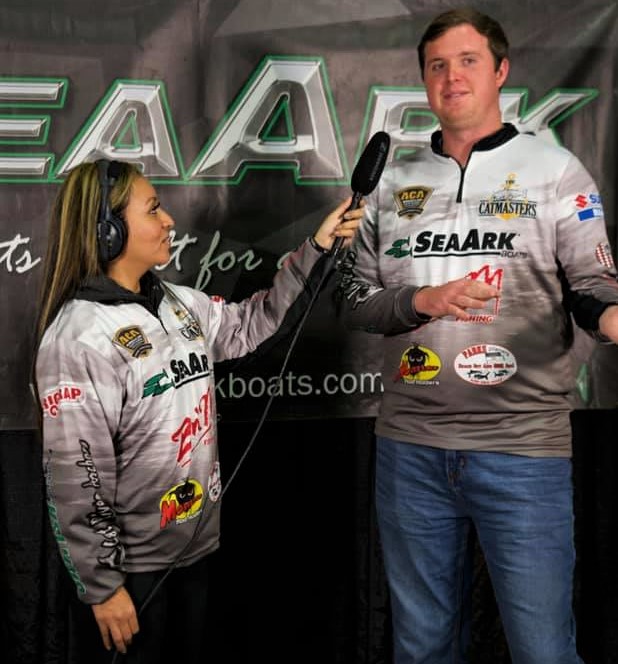 Emceed by SeaArk Boats’ Jeremy Coe, the weigh-in showed the event to be a remarkably close competition. Only 2.47 pounds separated the first and third-place team. The live feed was emceed by Leslie VanDerau of Heroes Outdoor Therapy. 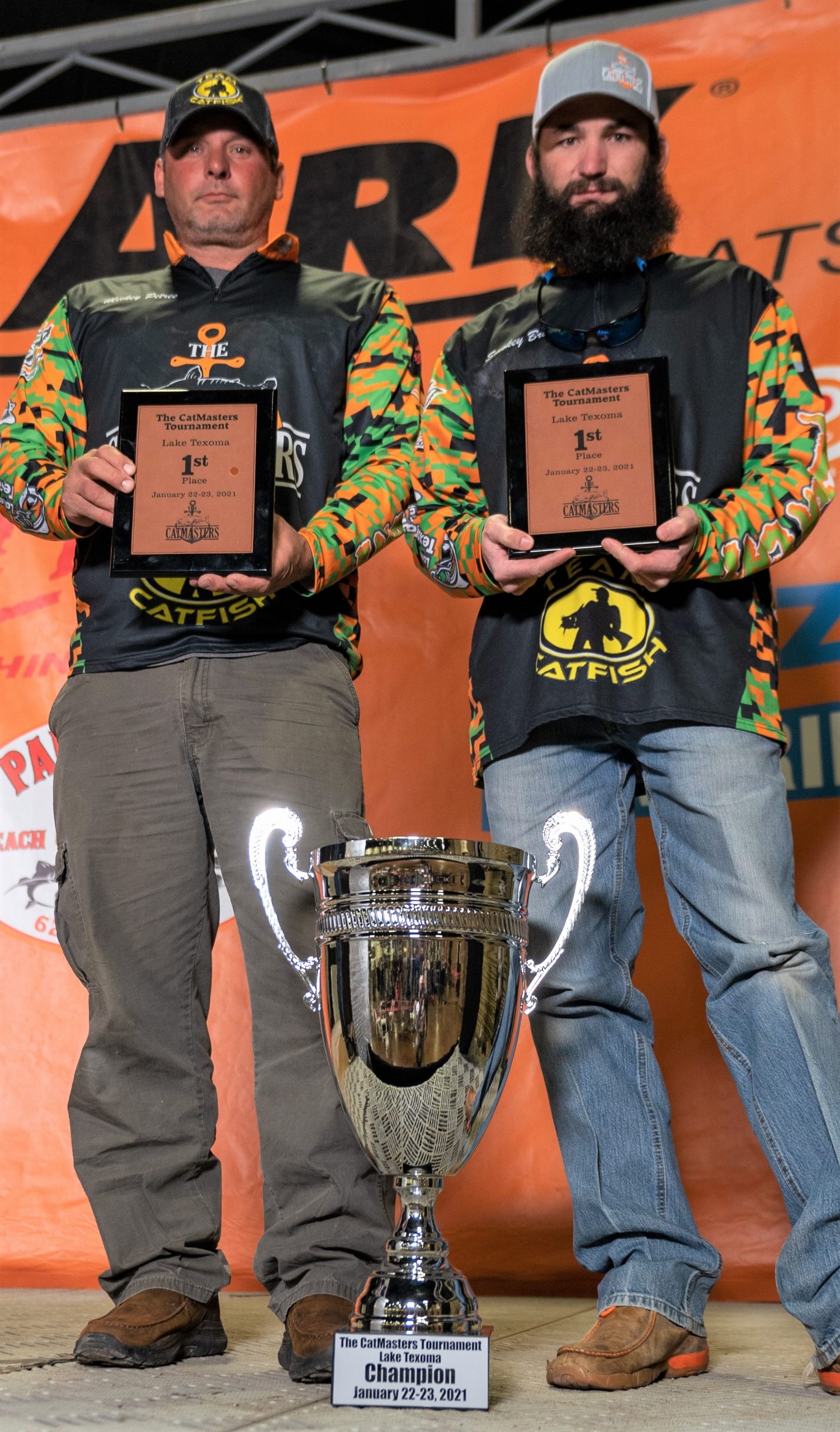 Team Mega Cat made up of Mick Petree and Smoky Brown claimed the top spot at Texoma with a two-day total weight of 160.15 pounds.

It was a pretty good two days for us,” reported Petree. “On day one we didn’t catch our first fish until 11:40 so it started off a little stressful. We had 10 fish total on day one.” 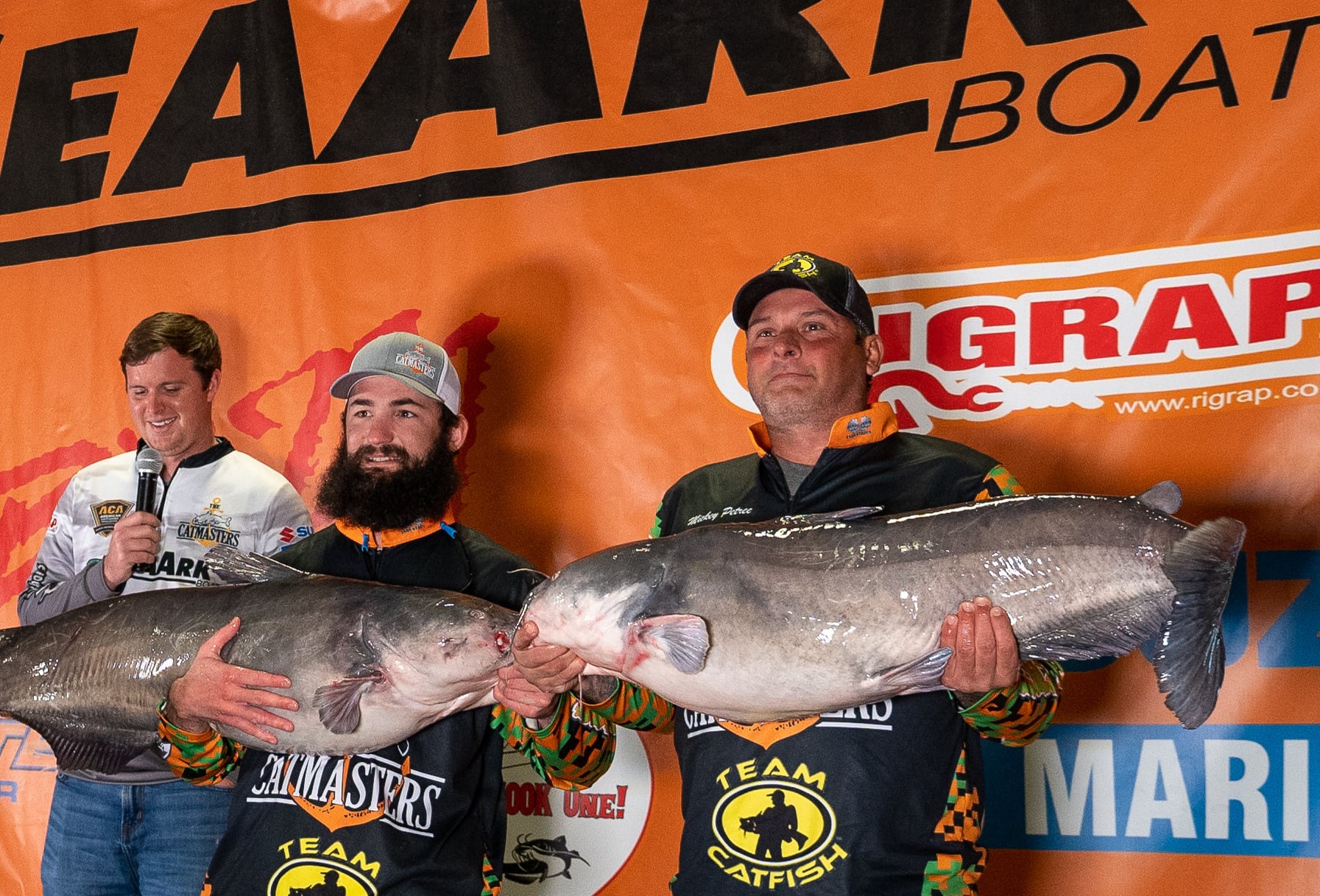 Petree and Brown adapted to the cold and cloudy weather to find their winning fish.

“We based our fishing on the expected weather conditions,” said Petree. “It was cloudy and cold. Given the wind direction, we were able to pull our Parks Planer Boards. With the water temps in the mid-40s, we targeted water between 60-80 feet deep along river edges. We rigged with Demon Dragons and Team Catfish 8/0 Double Action Hooks baited with fresh cut bait.”

“We would like to thank Parks Planer Boards, Team Catfish, RigRap, Tackle Bandit, The Catmasters, and the American Catfishing Association,” concluded Petree. 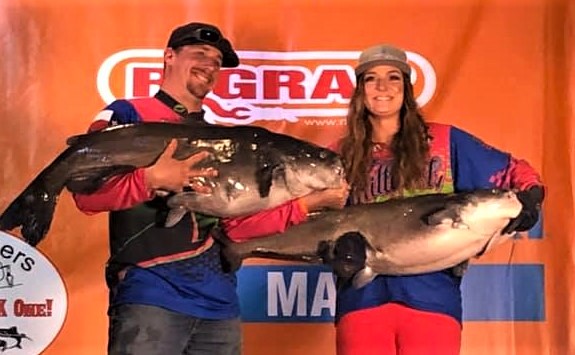 The runner-up spot went to Shay and Courtney McDonald, Team Here Kitty Kitty. Falling just a couple of pounds behind, the husband/wife team brought 158.65 pounds of Texoma cats to the scales in the two days of fishing. That weight also gave Courtney the Top Finishing Female award. 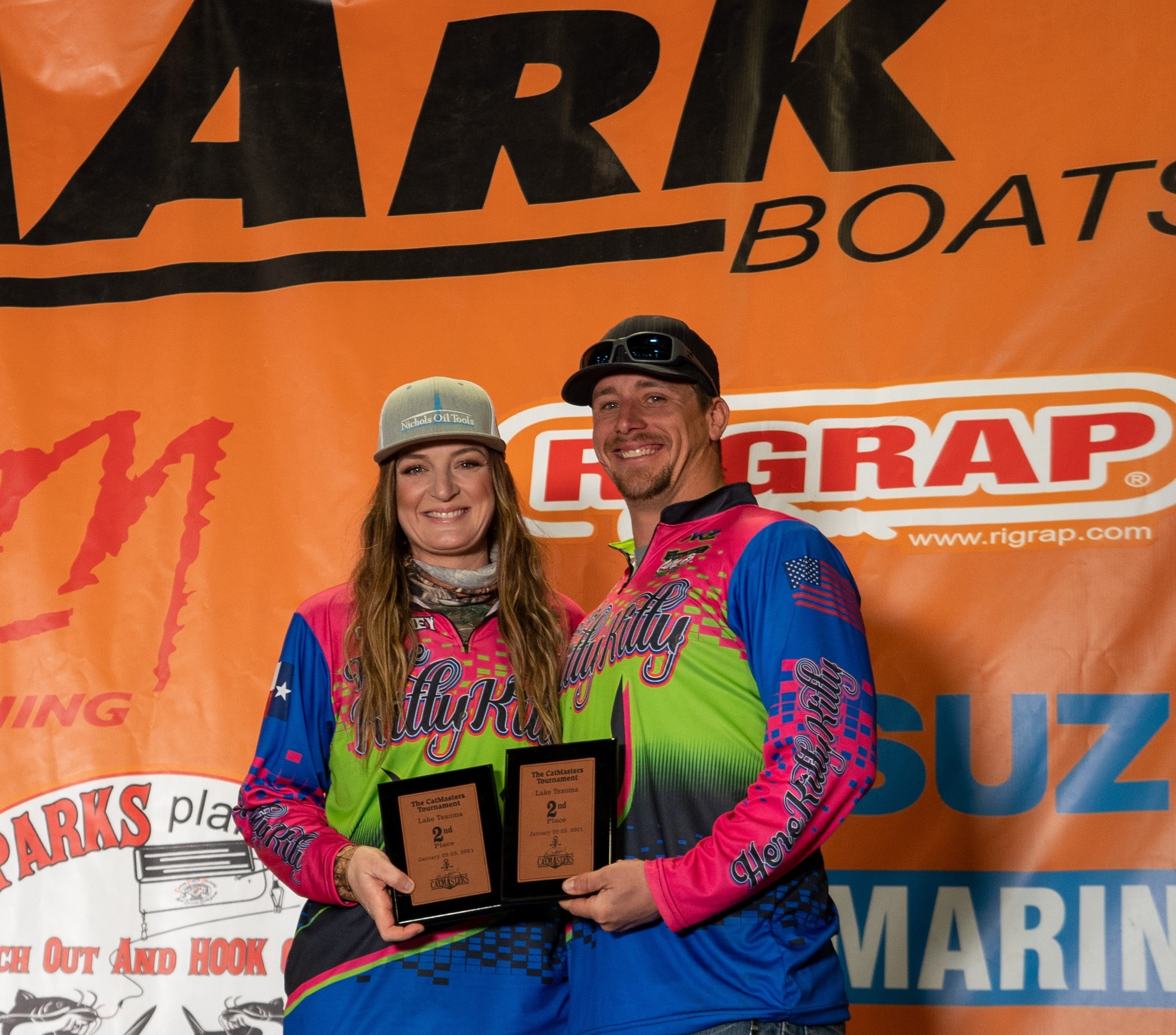 “The water temp was 45-47 all week, “reported Shay. “Our bait of choice was cut gizzard shad. The weather was far from consistent all week during prefishing. On tournament days the wind went from west to south to northeast and back to the southeast, so I spent a lot of time trying to mark decent fish stacked up.”

On Thursday during prefishing Shay and Courtney marked a lot of fish on ledges. They set their tournament day strategy on that observation.

They also had a 12 pounder that Shay measured at 29 and 7/8 inches. It was too close for the team to take a chance. They went to the scales with two fish weighing over 100 pounds and took the day one lead.

“That measurement was too close for comfort,” recalled Shay. “We did not want to risk getting disqualified for having 3 fish over 30 inches. “Especially knowing we had 100 pounds in the other 2 fish.”

Day two came and Team Here Kitty Kitty went straight back to the same area. They found that the wind had swapped from northeast to southeast and the fish were not there.

“Instead of spending too much time searching we gambled and fished the area anyway,” explained Shay. “We wanted to see if they moved back. We fished there until noon and all we caught were unders.”

At this point, Shay decided to make a move.

“I said screw it,” continued Shay. “We’re going to the bottom of the ledges and deeper in general. It paid off. We put our 2 overs in the boat in the last 2 hours of fishing. They were not enough to keep us in lead, but they kept us in the money.” 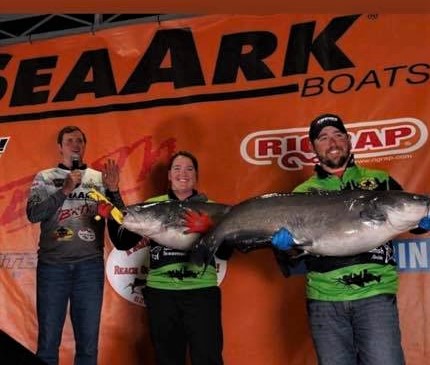 Just about a pound behind second, another husband/wife team claimed the third-place spot. Daniel and Amber Armstrong had a two-day total weight of 157.68 pounds. They are fishing the points race under the team name, Southern Monsters.

Lake Texoma is Daniel’s home lake. He owns and operates laketexomacatfish.guide on the lake where he fishes all year long for catfish, striper, and smallmouth bass so he has a familiarity with the lake. 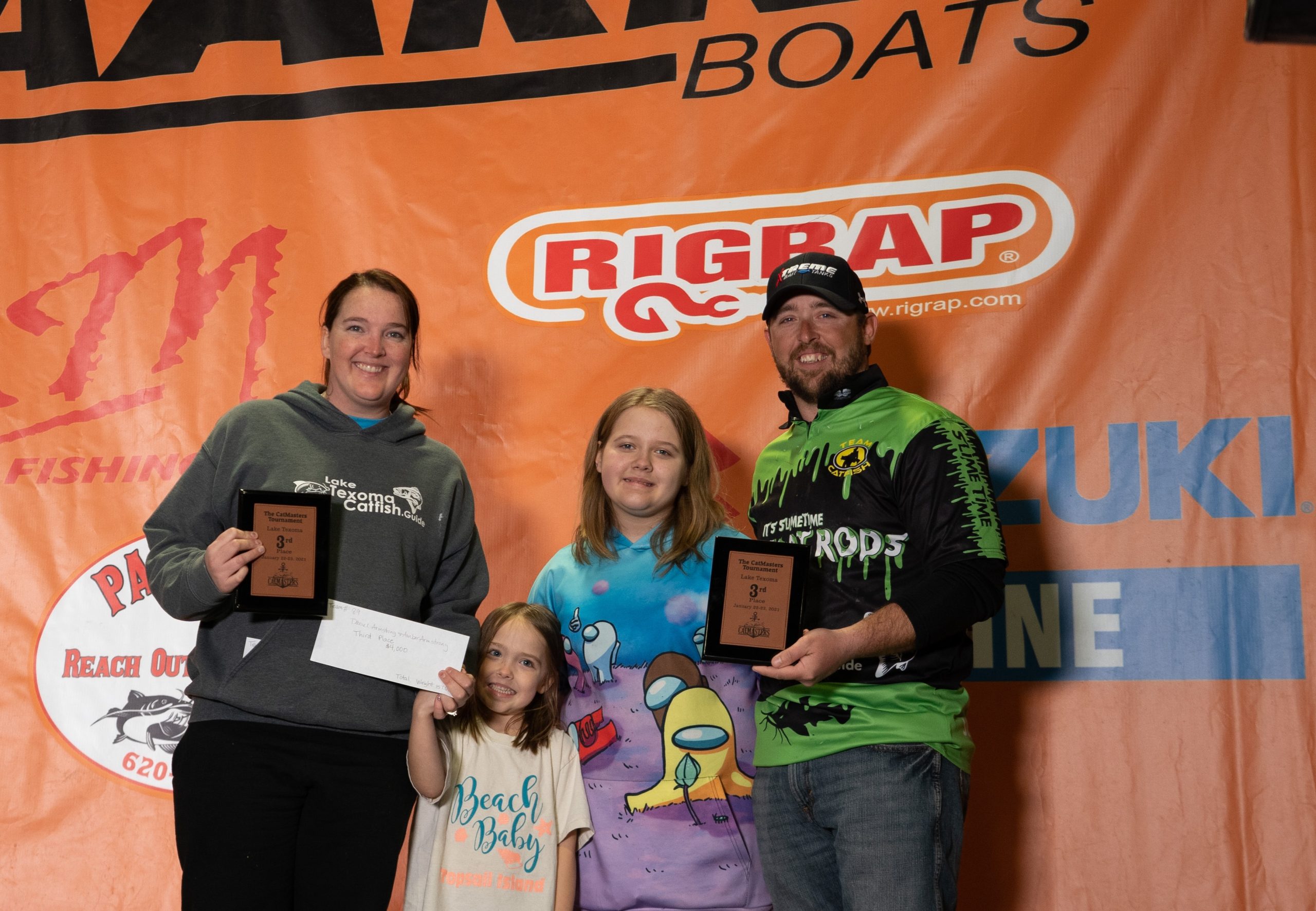 “January can be one of the hardest months to fish Texoma,” advised Daniel. “Finding fish isn’t really the hard part it’s getting on a consistent pattern. Basically, we decided to fish to our strengths.”

Team Southern Monsters found fish very early on in the week while prefishing and they actually wanted to eat every time they fished them. They tried to copy the pattern across the whole lake with little success, so their game plan for tournament day was set.

“I believe that our success came in the fine details of what we did,” explained Daniel. “We targeted humps and ledges on small flats. We fished a couple of different depths during the tournament. They ranged from 25-35 feet and then 40-55 feet.”

They bounced around between these depths for two days in a row. Their strategy landed them just a couple of pounds shy of first place and better than last year when they finished 5th.

“Our main style of fishing during the tournament was drifting,” continued Daniel. “Having fresh shad, carp, buffalo, and perch was the key. We used a 35 gallon Xtreme Bait Tank to keep our shad and perch alive all week long allowing us to have super fresh bait each day.”

They used Parks Planner Boards to cover more water while targeting the depths listed above. They also rigged with extra-long leaders.

“We rigged with 5– to 7-foot leaders,” explained Daniel. “We added Demon Dragons, tied in-line, about 4-6 inches above an 8/0 Team Catfish double action hook.”

“I was super thankful to get to fish The Catmasters series with my wife Amber,” concluded Daniel. “We are looking forward to Lake Tawakoni next month, which is also a lake I spend a lot of time on!” 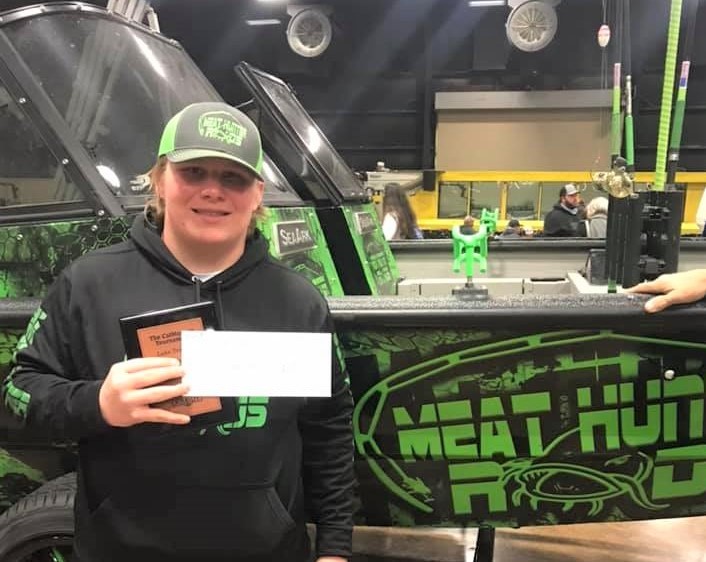 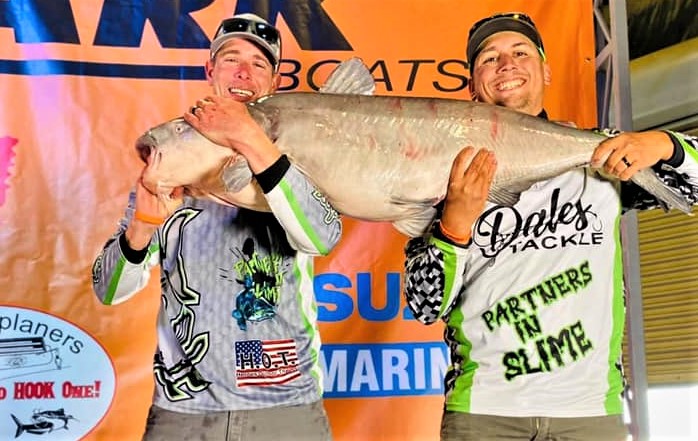 Aaron Churchwell and Daniel Mata claimed the Big Fish and Veteran Big Fish honors. They caught a 59.04-pound blue on day one to claim both titles as they finished 15th overall. The Top Veteran Big Fish award was presented by Heroes Outdoor Therapy.

The Points Race
The $20,000 points race will be determined based on the team with the highest scoring 3 tournaments of the 7 tournaments on the trail. It is important to note that to be eligible for the points race teams must register. The points race is currently led by the Mega Cat Team of Mick Petree and Smoky Brown.

Teams in the points race consist of the captain and two co-anglers. All teammates including the alternate must be declared at the beginning of the season or at the 1st participating event. No changes in team structure will be allowed. The seven tournaments include Caruthersville, Helena, Possum Kingdom, Grand Lake, Lake Texoma, Lake Tawakoni, and the three-day Classic on Wilson, Wheeler, and Guntersville in Alabama.

“We had a lot of great fish weighed,” said Tournament Director Brian St. Ama. “I want to thank our sponsors, SeaArk Boats, B’n’M Poles, Rigrap, Parks Planer Boards, Cat River Anchors, Monster Rod Holders, Team Catfish Tackle, Choctaw Country, and all the others that helped make the tournament happen. Finally, thanks to all the anglers that participated. We look forward to seeing you at future events!”

The Catmasters next event is at Tawakoni on February 26-27, 2021. Anglers can view the details on the website at https://thecatmasters.com/tawakoni/.