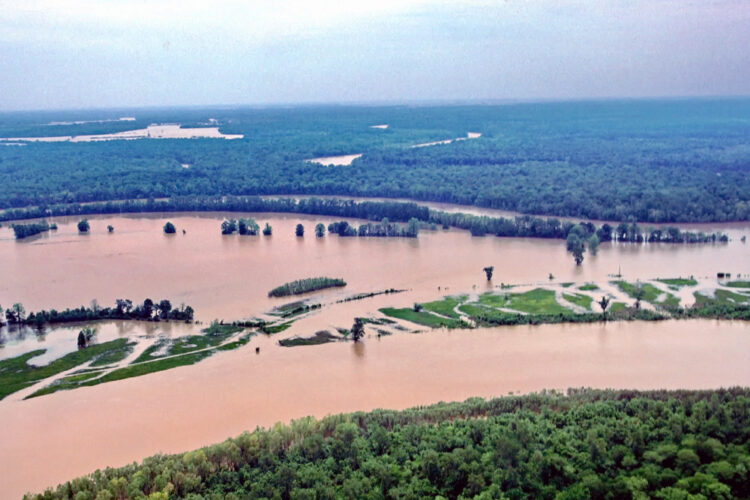 In the spring of 2019, floodwaters covered millions of acres adjacent big rivers in the Midwest, High Plains and South. The high water caused millions of dollars in damage, but for catfish, the floods brought a bounty of food. (Keith Sutton Photo)

Changing climatic conditions have made high-water conditions the new norm on many of our big rivers, especially in spring. Consider, for example, the spring of 2019, which was the wettest in 124 years of recordkeeping. Major flooding affecting millions of people occurred in the Midwest, High Plains, and the South along big rivers like the Missouri, Mississippi, Arkansas, and their tributaries. New record river levels were set at 42 different locations in an event the New York Times called “The Great Flood of 2019.”

Flooding certainly isn’t good for people. And the devastating effects of high water wreak havoc on all sorts of wild animals, too. But for one group of creatures—catfish—high water is good news, not bad.

Over eons, catfish have evolved to take advantage of floodwaters like those that inundated hundreds of thousands of square miles in 2019. The reason, in a word, is “crayfish.”

Because the ground in big-river floodplains is low and flat, a rise in river level of only a few inches can flood thousands of acres of bottoms. As water rises and woodlands flood, a new food source—terrestrial crayfish—becomes available to catfish.

Crayfish are abundant in most bottomland hardwood forests, but most of the year they live on land and are inaccessible to catfish. During overflow periods, however, the crayfish must live in an aquatic environment, and catfish are drawn to them like kids to a candy store.

The impulse to dine on these crustaceans is driven by the catfishes’ reproductive urge. Don Jackson and Joe Flotemersch, researchers at Mississippi State University, learned that peak use of crayfish occurs prior to egg occurrence in channel catfish. And because the crayfish are excellent sources of essential amino and fatty acids, those that are gobbled up help boost egg development.

In other words, when rivers overflow and catfish can feed on crayfish, they produce more eggs. As a result, during flood years, these river ecosystems produce astounding numbers of catfish fry that grow and become available for anglers to catch.

Flatheads, blues and channel cats all join the feeding frenzy, moving from rivers into the shallow water that now inundates many acres of bottomland. They will feed in the floodwaters as long as water is high enough to swim in, sometimes for several months.

You might think it would be easy to catch these actively feeding fish roaming about in the shallow water. Unfortunately, that is not the case. You can get the job done using a rod and reel from a boat or while wading. But these catfish tend to be widely scattered, constantly moving and full-bellied, increasing the difficulty of finding them and getting them to bite. That’s why many anglers fish with limb-lines that can be set in place and left until a catfish bites.

A limb-line is nothing more than a baited hook and line tied to a stout yet springy limb overhanging the water. The limbs you use must flex properly so hard-fighting catfish can’t break a line, pull a hook free or snap a limb. Willow and bald cypress limbs are ideal, but green branches of any sort will work if they are strong, pliant and provide a good anchor point above the water.

Fishermen have employed limb-lines for “woods fishing,” as this tactic is called, for more than a century. In their 1923 book, “American Food and Game Fishes,” D.S. Jordan and B.W. Evermann described this unique sport.

“Short brush lines with single hooks are tied to limbs of trees here and there through the forest, in such a way as to allow the hook to hang about six inches under water,” they wrote. “The trees selected are usually those along the edges of the float roads, and, that he may readily find his lines again, the fisherman ties a white rag to each tree to which he has attached a line.

“The lines are visited daily, or as often as practicable, and the fish are placed in a live-box, where they are kept until the tugboats from Morgan City (Louisiana) make their regular collecting trips. Then they are transferred to very large live-boxes or cars carried in tow by the tugs, and are taken to Morgan City, where the fish are dressed, put in barrels with ice and shipped to the retailers in many States of the Union.”

Because they are readily available during flood periods, crayfish are often used for bait when woods fishing. But many limb-liners prefer live baits such as sunfish, goldfish, carp or frogs rigged on short lines so they will thrash enticingly right at the water’s surface. When using this tactic, you should tie each limb-line to an anchor point, then cut off enough line to keep the baited hook just below the top of the water.

Check your lines often, and get ready for fun. When you see your limb-line branches bouncing up and down, you know there are fish waiting for you. They could be nice eating-size channel cats. Then again, you may have hooked a monster flathead or maybe a heavyweight blue cat. You never know what’s likely to turn up when you’re fishing floodwaters, but those bobbing tree limbs are a sure sign of success.

When springy branches are unavailable, the limb-line fisherman sometimes uses solid, inflexible limbs but ties a 1/2- to 1-inch-wide section of rubber innertube into the line to provide the flex.  Others use yo-yos (White’s Auto-Fishers). These spring-loaded devices allow a fish to struggle without breaking the line or tackle and provide a trigger mechanism that helps set the hook.

The line for limb-lines should be at least 25- to 30-pound test, with braided Dacron like Tuf-Line (tuf-line.com) a favorite among many practitioners. Circle hooks (4/0 to 10/0) are ideal as they hook fish in the corner of the mouth, not deep in the gullet, allowing anglers to release fish that won’t be eaten. Depending on the amount of current and the type of bait being used, weights may also be required to keep the hook and line underwater.