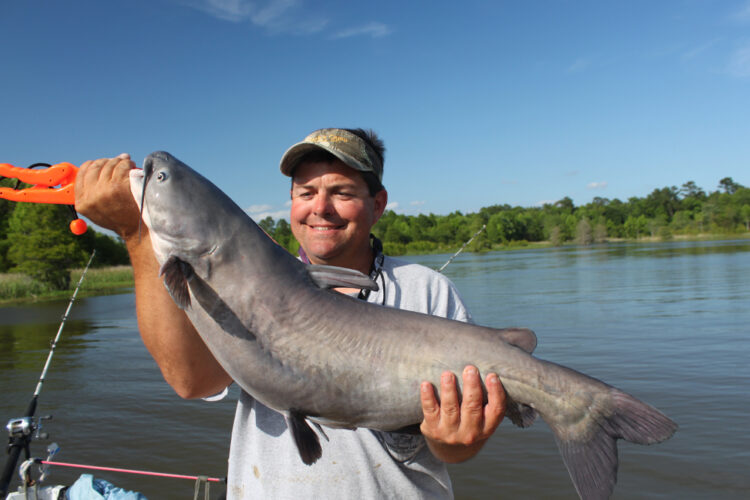 The Shallow Bite on Santee Cooper

“We’re going shallow this afternoon,” Kevin Davis said with a smile as we idled away from Black’s Camp on Lake Moultrie.

South Carolina’s legendary Santee Cooper lakes are best known as drifting destinations for catfish and drifting the open waters of Lake Moultrie produces good catfishing action throughout the year. During early spring, though, when conditions get right, the cats stray shallow and yield thrilling action, with big blue cats hitting in only a few feet of water and making reel-burning runs when hooked.

Consecutive sunny and unseasonably warm days had drawn the baitfish and catfish up onto flats along Moultrie’s edges, setting the stage perfectly for shallow-water anchor fishing. And Davis, who operates Black’s Camp, had some shallow spots in mind that he wanted to explore. I was delighted to hear the afternoon’s plan, having experienced the shallow bite once before and knowing the excitement of each bite and fight.

The early-season shallow bite is a celebrated event at Santee Cooper because veteran anglers have long known about it and have learned what draws the fish shallow and how to target them. It’s not a Santee-specific phenomenon, though. In fact, it happens in most reservoirs that have significant shallow flats and that support good numbers of blue catfish or channel cats that are large enough to feed heavily of baitfish.

The science is elementary. Early spring sunny days warm shallow flats just enough to draw big schools of baitfish, and the cats move up both for the warmth and to take advantage of the concentrated food source. In some waters, including lakes Marion and Moultrie, some baitfish species also begin moving to shallower areas prior to spawning in early spring.

The most productive areas are expansive flats with depths of less than about 10 feet (often much less) that are close to substantially deeper water for the fish to migrate out of and stray back to when a warm spell passes. Watch your temperature gauge as you search flats and look for temps that are three to five degrees warmer than the main lake.  Also watch for shad, both on the graph and dimpling the surface.

Atop any given flat, the fish relate to ditches and depressions and to stumps or other cover, including rocks and downed trees on some lakes. When Davis finds warmer water and bait, he likes to set up between a couple of depressions, which might only be a foot deeper than the water around them, so he can place bait in and around those depressions by casting in different directions.

Because everything is triggered by the sun warming shallow areas, the best action typically occurs in the afternoon, and it’s not uncommon for the bite to continue heating up as an afternoon progresses.

In fact, the good shallow fishing commonly continues after dark. Although air temperatures might fall quickly on a spring evening, water temperature changes are gradual. Couple this with a catfish’s inclination to feed shallower at night, and it’s easy to see why the first few hours after sunset can be outstanding.

Traditional sonar won’t show most of the fish in very shallow water. Modern electronics that scan in front of the boat and to the sides will. Even if you lack the technology to see the fish, if you find significantly warmer water, bait and cover on a shallow flat in early spring, it’s almost certain that catfish are around. Finding the best spot might require setting up, waiting, and then moving a time or two, but you’re likely to find fish eventually.

Davis double anchors in the front and the back or ties off to a tree snag at one end so the boat will not swing and casts out numerous lines, putting rods in holders. Because the water is shallow, fish are easily spooked, so long casts are beneficial.

Simple sliding bottom rigs include enough weight to facilitate long casts and hold rigs at the bottom, a swivel, a couple of feet of leader and hook matched to the size of the bait. Long rods help facilitate long casts. Heavy braid and strong reels with tight drags help turn around fish, which is critical if you’re fishing around significant stumps or laydowns.

Because the fish move shallow to feed on baitfish, fresh cut bait is generally best, and the ideal plan is to match the natural forage. At Santee Cooper that often means blueback herring or alewives during the spring. In other lakes it might mean threadfin shad or gizzard shad. The size of cut bait chunks to use, of course, depends on the size of fish that live in a lake and whether you are more interested in numbers or trophy potential.

Once lines are in place, it becomes a waiting game, and there is no magic answer to how long to wait in each spot. If Davis is getting at least a bit of action, he’ll remain patient because fish cruise on the flats and more can come through at any time. That said, if they just aren’t biting at all, he’ll typically move after 30 or 40 minutes. That might mean a short move to another spot on the same flat or a larger move to a completely different area.

Once rods do start bending, Davis knows some real fun is about to happen.

Blacks Camp (843-753-2231) is located near the Diversion Canal, which connects lakes Marion and Moultrie, providing excellent access to both lakes. Fishermen’s services including a boat launch, fresh bait, the right tackle, up-to-date information, a range of lodging options, outstanding food, and a top-notch team of fishing guides.