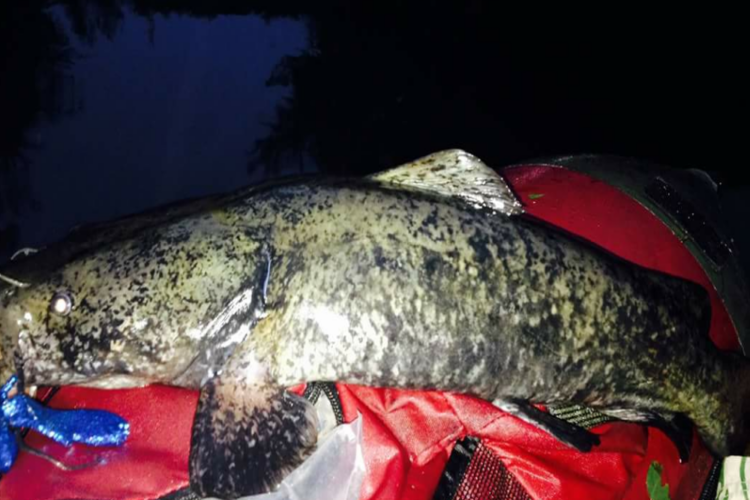 This nighttime beauty is one of the reasons that Severns supports selective harvest. He believes that fish like this should always be returned to the water.

Observations by many flathead anglers suggest that the total weight of true trophy flatheads is declining. In years past catching a 60- to 70-pound flathead was fairly common. Nowadays that is not so likely.

This popular target of many catfish anglers is found roaming the waters from the lower Great Lakes through the Mississippi River watershed and the Gulf states. They are the second-largest freshwater fish in many regions of the U.S. Only their cousin the blue catfish is larger. Because of their popularity with catfish anglers, the observation that the larger of the species is declining in numbers is worrisome.

Keith Severns is known for his passion for the “ugly critters.” That passion has led him to raise several flatheads in an aquarium, many from tiny fry. Severns uses the flatheads in his tank to study their behavior. He jokes that one day he might just be able to think like one. More than anything, he wants anglers to learn about them and respect them for the wonders that they are.

“When they are tiny, I start them in a small 50-to-75-gallon aquarium,” explained Severns. “Once a fish hits 4-5 inches, which takes a year or longer, they live their first year of life under a rock. And that is exactly what they do in the wild.”

Severns says if they don’t hide in the rocks, they are dead because they will be eaten by other predators. This is Mother Nature’s conservation strategy. As they grow, he moves them to a 200-gallon tank.

“As they slowly grow, I move them to bigger tanks to accommodate their growth,” added Severns. “Eventually they are moved to a 6-foot-deep rock quarry garden pond. From there they are eventually released back to the wild.”

Many people grossly underestimate the age of these fish. Even some biologists are now on board with the fact that the otolith ring (ear bone) readings are just not that accurate. They don’t account for the “tiny years” of a fish’s life.

“I can tell you firsthand that it takes the average flathead 5 years just to make it to 4 or 5 pounds,” stated Severns. “People might say that my “captive” flatheads are different than wild flatheads, but I assure you that I provide mine with perfect water quality and adequate space.”

“If anything, my flatheads have it easy,” suggested Severns. “They should actually grow faster than wild ones. Also, many people believe that flatheads gain 5 pounds a year throughout their life. So, in their mind, a 45- to 50-pound flathead is only 9 years old. That fish is probably in the range of 15 to 20 years old!”

According to Severns, the 5 pounds a year thing is true to some extent, but that doesn’t start happening until a flathead reaches the 15- to 20-pound weight. By that time, they can start taking in very large prey and therefore put on more weight.

His interest in studying flatheads and sharing his knowledge with others has led him to believe that the trend of fewer trophy flatheads could be slowed by a simple concept that he promotes and follows.

“My conservation philosophy is simple,” explained Keith Severns. “I am all for the time-honored tradition of table fare, but for doing it while practicing the concept of selective harvest.”

He explained that selective harvest means choosing the fish you keep for the table based on the population dynamics of the given waterway you are fishing It is sort of a win-win situation. Anglers can keep some fish for the dinner table but still protect the vulnerable fish.

“The most abundant year-classes will present themselves,” continued Severns. “Take a few from this group for the table. If several different year-classes show themselves to be abundant, then take one from each group. If the fishery ends up being poor for all year-classes, then take none from that waterway until it rebounds.”

He went on to explain that regardless of abundance, it is a rarity to be on a waterway that is littered with 50- to 70-pound flatheads. Fish of that stature usually make up a very low percentage of the population density. That’s the reason he doesn’t like seeing the giant flatheads taken at all.

“Regulations are good,” advised Severns. “But we shouldn’t rely on a one size fits all theory. Each waterway is its own unique ecosystem. That means that wise selective harvest is crucial to maintain quality fisheries, especially on smaller bodies of water that are more susceptible to overharvest.”

He is not worried about flatheads ever going extinct, but he is worried about the seemingly perpetual downsizing of the true giants. It has become a real rarity to see flatheads in the 80- to 100-pound year-classes, while blues in those same year-classes are caught on a weekly basis.

“I believe the abundance of blues is due to more of a catch-and-release methodology with the blue cat crowd,” suggested Severns. “Tournament anglers seem more conservation minded, and blues are more of tournament fish. Add the fact that blues are hatchery species that are sometimes stocked into reservoirs to control shad, and you realize why they are more protected by most states.”

“It seems like common sense to me,” noted Severns. “But many anglers just don’t get it. Too many anglers believe that big fish magically replace themselves overnight, or they are just plain greedy and gluttonous. In my nearly half-century of fishing, I have seen many, many waters that used to be fish factories slowly dwindle over the decades into ghost towns and shells of their former selves. The main reason is constant overharvest and especially overharvest of the larger year-classes.”