No Result
View All Result
Home May 2021

Big River Tactics: How to Fish Wing Dams and Eddies

Big rivers are home to many big catfish, but you’ll need in-depth knowledge of their hideouts and habits to catch the heavyweights.

The long rock wall jutted from the bank out into the Mississippi River. At the wall’s end, the river rolled around on itself to create a huge vortex. It looked like someone had pulled a huge plug from the river bottom and all the water was going down an enormous drain.

“Suckholes,” we called such maelstroms when I was a youngster trotlining the river with older relatives. Some call them “whirlpools.” James Patterson of Mississippi River Guide Service in Bartlett, Tenn. (bigcatfishing.tripod.com) prefers the term “eddy.”

“Drop your bait right at the edge of that eddy, and free-spool it all the way to the bottom,” Patterson told me as we fished the river near Memphis one day. I did as he suggested, and to my surprise, the big chunk of shad went straight down. The instant the bait touched bottom, before I was quite prepared, something huge grabbed it. And when it did, that something huge nearly snatched the rod from my hands.

I never saw that something huge. It got the best of me, as the big ones often do. I’m quite certain, however, it was a catfish—probably a sizeable blue. And I learned that day that catfish fans who often fish large navigable waterways should study and understand both structures Patterson and I were fishing—wing dams and eddies.

A wing dam (also called wing dike) is a manmade barrier of boulders and rocks built perpendicular to the shoreline. Conventional dams extend completely across the rivers upon which they are made, but wing dams only reach partway. This method of construction allows wing dams to divert water into a faster-moving center channel, which reduces the rate of sediment accumulation and thus the need for dredging. Wing dams also reduce water flow near riverbanks to help prevent erosion.

When big catfish are hungry and actively feeding, you’ll usually find them near the river’s bottom on a wing dam’s upstream side. This zone harbors an abundance of forage animals like crayfish, mussels and shad, and the water hydraulics are such that current is reduced. Thus, catfish can feed there for hours with expending too much energy. If the river is high enough that the wing dam gets totally submerged, catfish also can gorge on addled or injured baitfish found in the turbulent water directly above the rocks and just downstream.

When their bellies get full, catfish will move to the downstream side of each wing dam and rest there where current is minimal. That’s why you should focus your fishing efforts on upstream edges. Being inhabited by full-bellied, lethargic catfish, downstream is rarely as productive. 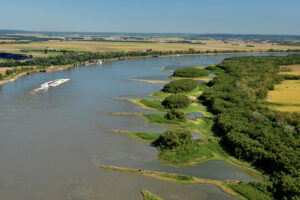 In this aerial photo of the Mississippi River near St. Louis, several wing dams running perpendicular to the right bank of the river are evident. These structures attract catfish because they are sources of abundant forage like baitfish and crayfish. (U.S. Army Corps of Engineers Photo)If you want to catch trophy catfish—blues, channels or flatheads—Patterson suggests dropping a bait near an eddy at the end of one of the wing dams. The biggest cats his clients catch often are hooked when fishing these vortices.

“I don’t fish the eddy part of this rotation,” Patterson told me the day I hooked something huge. “Instead, I fish the current along the edges. I find that catfish in eddy water are not active. Active cats are along the edges, so that’s where I want to anchor and fish.”

Patterson relies on two primary baits to entice his quarry. “I use live shad a lot, even though they’re hard to find,” he says. “Cut skipjacks (herring) also are good bait.”

A simple three-way-swivel rig is Patterson’s standard. The two-foot hook leader is tipped with a 3/0 to 7/0 Eagle Claw Kahle hook. The 8-inch weight leader is tied to a 3-ounce sinker. His fishing gear consists of “a heavy-action casting rod with a light tip and a lot of butt strength” and a bait-casting reel that holds at least 200 yards of 20-pound-test line.

“I anchor above the hole I intend to fish,” Patterson says, “then cast to the spot and let the reel free-spool until the weight hits bottom. Sometimes I’ll have out 200 feet of line. Big cats, especially big blues, usually hit hard and quick, so rod holders are necessary if you fish more rods than you can hold.”

You’ll know if you cast to the correct spot because your bait will sink quickly to the bottom and won’t move. If that doesn’t happen, reel in your rig and cast again until it does. Then, allow the bait to remain motionless for up to 10 minutes before moving and trying another eddy. The biggest cats in the area may cruise past an eddy several times before the taste and smell of your bait get their attention and they hurry in to attack.

When you do get a strike, there won’t be any doubt if it’s a trophy-class fish. Your rod tip will plunge, your drag will screech, and your heart rate will soar. Hook-ups with heavyweights happen often when fishing wing dams and eddies, making this form of big-river fishing one of the best of all ways to land the catfish of a lifetime. May luck be with you!