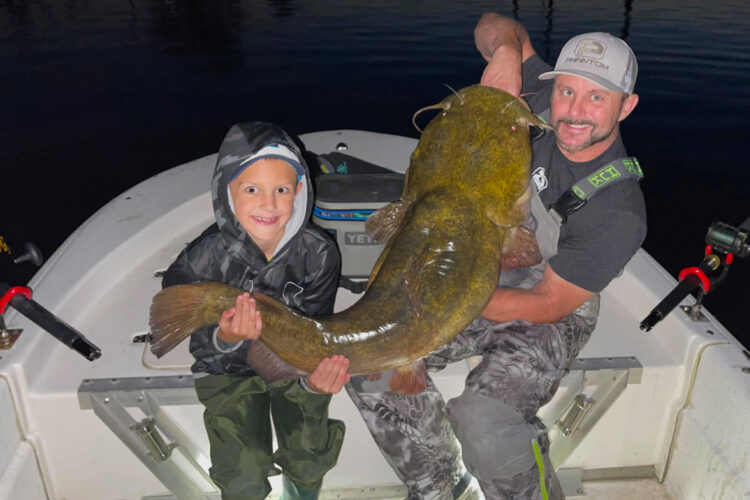 Nothing is more important than understanding the tides.

Flathead anglers continually debate live versus cut bait and day versus night fishing. Each combination of those elements has its proponents. Anglers who enjoy fishing tidal water have yet another element to consider.

Richard Chaplin is an avid tidal water flathead angler. He can be found often on the Cooper River in South Carolina during the spring. The Cooper River is tidal from the salt to the Trail Race Canal below Lake Moultrie. The spring months of April and May can produce some awesome flathead bites in this stretch of tidal water.

Chaplin’s attraction to flathead fishing is especially elevated for the Cooper River where other anglers often get frustrated and don’t return. For Chaplin that translates to less fishing pressure. Given Chaplin’s early fishing experience it was natural for him to take a liking to the Cooper River’s flatheads.

“I mostly like fishing tidal water because I have mastered it through years of experience,” revealed Chaplin. “I grew up around saltwater so everything fishing was based on the tides. I applied those same saltwater fishing fundamentals that I grew up with to help fine tune my flathead fishing.”

So, for Chaplin the tidal flatheads were a natural target because of his familiarity with the tides and now he has developed techniques that work well there to catch them.

“To begin with, the tidal water has a seasonal influx of anadromous baitfish such as the  blueback herring,” Chaplin said. “So there’s an endless supply of food to grow these big flatheads. I’ve caught more numbers of bigger flatheads right up to brackish transition where we catch mix species.”

The most critical factor in fishing tidal/brackish water is the tide, according to Chaplin. So he always studies the tide charts a few days ahead of his trip to decide on a game plan.

“My experience suggests, that tide direction and time of turn plays a bigger factor than moon or barometric pressure,” advised Chaplin. “The tidal current and the time of turn  dictate where I sit.”

He will avoid a tide turn soon after dark because he doesn’t want to pull gear and move to a new spot during what he considers prime fishing time.

“Flatheads are predominantly nocturnal this time of year,” explained Chaplin. “So the most predictable bite happens during the first hour after sunset. As soon as the sun sets you get that initial feed after they haven’t fed all day.  We affectionately dubbed that time as The Magic Hour. Many times over the years I’ve sat all night and moved every few hours, but the first 2 hours after dark is the best window for success so that is what I focus my effort on.”

Chaplin has his favorite spots to set up on. He is always on the lookout for eddies (swirling water with a reverse current) around geographic points or underwater formations. Find an eddy and you have found an ideal spot to suspend your bait. With the moving water (vs. slack tide turn) the bait tends to congregate in the eddies where they don’t have to fight the current. Find the bait, find the fish.

“Based on my saltwater experience, I make sure to plan trips when the water is flowing,” continued Chaplin. “That allows me to stay put during that trip and not have to adjust to a directional change. I mainly pick the eddies. The less turbulent water tends to be the best place to drop baits down in the strike zone.”

He anchors in the eddy between the rip line from the current and the bank. He positions the boat just on the deeper side of the drop off before the depth rises. His target depth is about 20 feet of water. Chaplin always use front and rear anchors to hold the boat stationary and provide a stable fishing platform.

Chaplin notes, that on an outgoing tide the spots fished on an incoming tide become unfishable. Instead he uses the same fundamentals to pick spots that are basically complete opposites. Whether incoming or outgoing, his basic terminal tackle is the same.

“My preferred setup is 8 rods evenly spaced around the boat,” offered Chaplin. “I run Carolina style rigs with 12-ounze egg sinker on the mainline above a swivel. I add 18-inches of 60-pound test mono leader, and 10/0 circle hooks with a rattle between the swivel and the hook. I pin my live baits, bream this time of year, between the tail and dorsal fin.”

Once rigged and baited Chaplin lowers his presentations down to the bottom. When the sinker hits bottom he reels up about 3 feet.

“I typically pick a spot and set up before dark,” explained Chaplin. “Once there I’m committed unless the wind or tide drives me to move. I am waiting on that Magic Hour.”

Chaplin fishes with the clicker on and the drag engaged, so when the bite comes it is apparent from the sound. He says takedowns usually come fast. The clicker screams for a couple seconds then stops. Then as the angler starts cranking the reel the flatheads come to life with their explosive bursts of energy.

Flatheads tend to pull straight down where blue cats tend to run sideways and offer more headshakes. Experienced anglers can usually tell what they have on the line before they surface.

“Sometimes we get what we call a sleeper on the line,” added Chaplin. “They will bite and barely set the hook. Then they just lay there until the rods are pulled to check the bait or it’s time to go home. It happens quite often on the Cooper, I’m not sure if that’s common everywhere or more so on tidal waters.”

Chaplin calls for patience once a flathead is hooked. He likes to fight them slowly so they burn energy and he also wants to see bubbles before they surface.

“The fish fight starts by cranking the reel,” advises Chaplin. “Don’t try to bring them to the surface too quickly. A nice steady fight makes them use up some energy so they don’t flop violently once they are in the boat. Secondly, I like to see them dispel their swim bladder to ensure a healthy release.”

While anglers wait for the bite, there are many aesthetic bonuses to enjoy while fishing the Cooper River. It is very common to see and hear porpoises while fishing the tidal water. Even though the Atlantic sturgeon population has been depleted by overfishing and habitat loss, lucky anglers may observe them breaching after the sun goes down. And don’t be surprised if you pull up a blue crab or two. They migrate to the brackish water in droves this time of year to spawn.