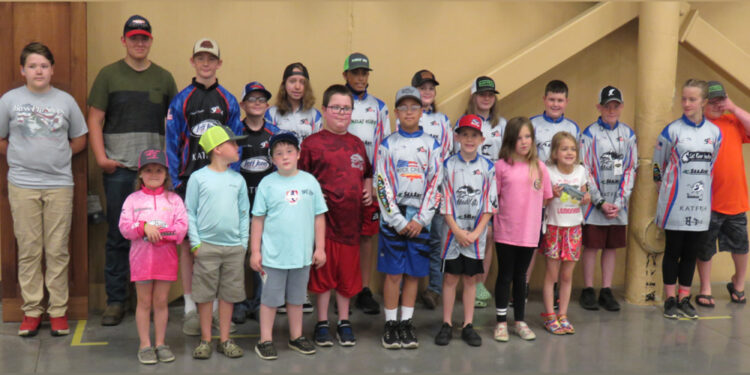 The Catapalooza catfishing expo, held in Pigeon Forge, TN, was the result of Hookers Terminal Tackle’s James Arwood and an idea he had a couple of years ago. After being delayed by the pandemic in 2020, the expo was held and it added Catapalooza for Kids to put kids in the spotlight.

The May 20 -23 event was held at the LaConte Center to expose all levels of anglers to a hands-on experience with vendors in the fishing world. With an emphasis on catfishing, the event featured well-known catfish anglers in seminars and vendors with all kinds of merchandise to demonstrate. Right in the middle of it all was a highly successful component aimed at the kids!

Frank Key with Jeff Jones Marine was the brainchild of the kids component in what was already billed as a family affair. Frank wanted to recognize individual kids by providing a jersey for each from sponsoring companies.

The companies that participated sponsored a kid for $200. The youth received a fishing jersey emblazoned with sponsor logos, and a free rod and reel.

Needless to say, the kids looked great in their jerseys as they roamed the expo hall participating in the event. The big wide smiles told the story.

The on-site part of the event was handled by Carolyn and Brent Jones. They registered the kids on arrival at the Jeff Jones Marine booth where they gave them their jerseys and guided them through the day that included a scavenger hunt, educational seminars, and a big prize raffle at the end.

“The kids did a scavenger hunt where they used clues that described various booths,” explained Carolyn. “Once they identified the booth there was a hidden letter at that booth. They wrote that letter down next to the clue and continued until all 8 clues were found. Then they had to unscramble the letters to spell the word “CATFISH!”  Once finished they returned their worksheet and it was entered into a drawing for some fun door prizes of more fishing gear.”

The seminar was led by Mickey Rogers and Hayden Gunther, one of the sponsored kids. The seminar included topics like conservation, safe fish handling, and boat safety.

CatfishNOW applauds the Catapalooza crew for doing a great job promoting the catfishing community and for the added emphasis on kids at their event.

Next year’s event is scheduled for the second week in June at the same location in Pigeon Forge. You can be sure there will be something for the entire family to enjoy so mark your calendars and begin planning NOW.