Flatheads on the Spawn 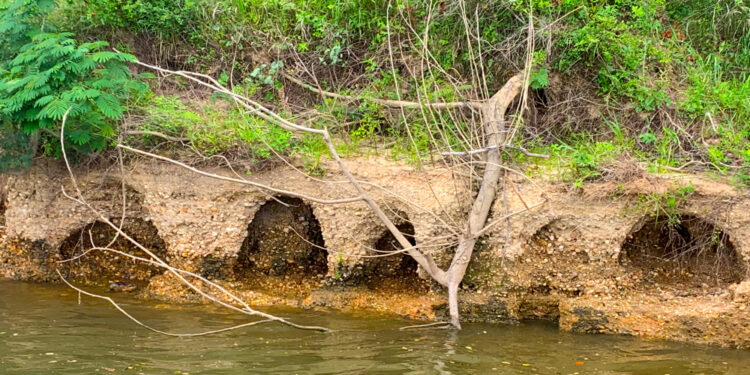 Potential catfish spawning areas can often be seen along the river bank when the water level is low.
Cavities such as shown here would attract nesting catfish when submerged. (Matt Mullikin Photo)

Largest fish stay hidden during spawn, but they can be caught.

When summer starts heating up, Renne Shumway—better known as Catdaddy to his friend and followers—resumes his longtime quest to catch the biggest flathead in the Kansas River.

It’s not an idle dream. He landed a 91-pound fish on rod and reel several years ago in June.

“I was using a bullhead as big as some people catch—7 or 8 inches long,” he said. “It took me 45 minutes to talk that big flathead into committing. She would pull the rod down nice and steady, then let go. She came back three or four times and every time the rod would bend further.”

“Finally, she decided she wanted it and I got her.”

Shumway released that beast and hopes to one day meet up with her again. One thing is certain: He’s fishing in the right place.

The Kansas River is loaded with big, gnarly flatheads that would put a mighty bend in a stout fishing rod. There are only two problems: getting one of those monsters to bite and being able to pull it out of the nasty cover where they reside.

Shumway has caught big flatheads out of everything from the shade of old car bodies in the river to the shady holes under old concrete boat ramps to thick log jams.

The biggest flatheads don’t make it easy on a fisherman. But that’s what Shumway admires about the beasts.

“There’s nothing like a mammoth flathead,” said Shumway, a longtime guide who lives in Topeka, Kan. “They’re smart, they’re wily and they’re tough.

“They get down in that thick brush and they just dare you to pull them out.”

Shumway knows it can be done. He has caught numerous flatheads weighing 50 pounds or more, many of them in early summer. When the flatheads start to move shallow for the spawn, usually when the water temperature climbs into the high 60s or low 70s, he knows where they will be.

“I look for those hard cuts where the river has dug out a nice groove in the bank,” Shumway said. “They like to lay up under there and just wait for bait to come by.

“They’ll nest in log jams, brush piles, old beaver huts, under the concrete on old boat ramps, too. They’re usually not just out roaming around. They’re not like an ol’ blue cat.

“The biggest flatheads are going to be right in the middle of the hardest places to get a bait to.”

But there are ways to yank them out of that cover, Shumway will tell you. The first step is bait selection. The flathead is a carnivore. It almost always prefers some type of live bait. No stinkbait, blood bait, or liver for this cat. It is a predator that prefers its meal wiggling.

Shumway often uses a 4- or 5-inch green sunfish that has plenty of kick to it. He relies on a Seeker rod, an Abu Garcia 7000 baitcasting reel and a 40- to 50-pound copolymer line, with a heavy leader.

He often anchors above a patch of brush or a log jam and lets his bait drift down river “until it’s knocking on their door,” he said.

“I love it when the logs and brush get piled up along those bridge piers when the water gets a little high,” he said. “Those are hacienda hotels for those big flatheads.”

Shumway often uses a bright-colored balloon as a bobber and lets his bait drift to the edge of the cover. He utilizes high-visibility bright-orange line to detect the subtle strikes of the flatheads. Even then, it is often a game of patience.

“If you’re short on patience, you have no business fishing for flatheads,” he said.

Shumway will give each hole 45 minutes. If he hasn’t had a bite, he will move on to the next spot. On the Kansas River, there’s no shortage of places to target. In a one-mile stretch near Lawrence, Kansas, there are 30 to 40 good brush piles or trees that could potentially harbor big flatheads, he said.

Shumway breaks several myths with his fishing—first, that big flatheads can’t be caught during the spawn, and second, that they can only be caught at night.

“You always hear that flatheads are nocturnal, and I did a lot of night fishing in my younger days,” he said. “But these days, I fish mostly during the day and I still catch them.”

Finding good habitat is the key, Shumway said. Studies have shown that the flathead is a homebody; that it seldom strays far from its home territory.

Give it a secluded hole in a river bank, a thick brush pile, or an out-of-the-way hole, and it’s quite content to sulk on the bottom most of the day.

Shumway feels fortunate to live in Kansas. The state has plenty of ideal flathead water.

He is a self-professed river rat, and there are plenty of waterways that hold big flatheads. The Kansas River is his favorite, but he also fishes the Wakarusa, the Marais des Cygnes and the Delaware.

Shumway has a deep respect for fish that even approach that world-class size. That’s why he and his guide clients release the big ones they catch.

“You have to throw those big boys and gals back,” he said. “They’ve been dodging the bullet for a long time. They deserve our respect.”