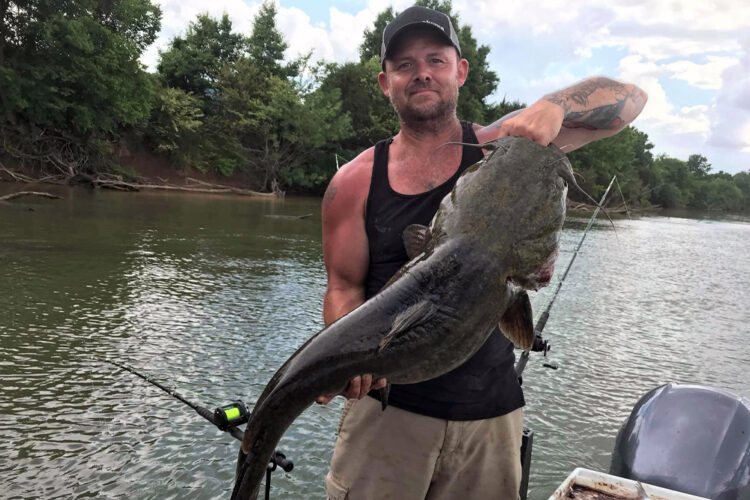 Do you dread the spawn coming to your area? Here’s a few things you can do to improve your success.

Many anglers begin moaning the blues (no pun intended) when the catfish spawn begins in their fishing waters. The spawn is not a one-time-fits-all occurrence. It depends on where you live. It starts earlier in the south and works its way northward.

In the south, where Trevor Nederhoff fishes the blues are usually in full spawn sometime in June. Further north in Iowa the bite may still be on fire. Trevor is a well-known tournament angler who doesn’t give up on the blues just because he is challenged by the spawn.

It is a known fact that blues, channels, and flats spawn during the late spring and summer when the water warms up. Blues and channels are said to be ready when the water temperature reaches the 70- to 84-degree range. For flatheads, the spawning temperature ranges from 66-75 degrees.

“To me the biggest challenge of the spawn is first knowing for sure when the spawn is actually taking place,” revealed Nederhoff. “Next, I want to figure out what bait in the body of water I’m fishing will be effective to get the big fish to bite.”

With water temperature as the first indicator, Nederhoff has an idea of when the fish are going to be bedding down. Visual signs such as bloody fins and tail, open wounds, scratches, and bloody mouths are all indicative of pre-spawn fish.

“If you fish on a regular basis in the late spring and early summer months you will start to notice the bellies of the fish filling up with eggs,” added Nederhoff. “And from time to time you will have fish expel eggs on the deck of the boat. When water temperatures are right, you can expect the transition to begin taking place.”

With the transition to spawn beginning, Nederhoff begins to use bait that comes from the area he is fishing. He also shifts away from dragging bait to fishing more on the rope. Biologists tell us that catfish seek out hollow logs, holes under mud banks, overhanging underwater ledges, and similar structure as nesting places and these are the areas he targets.

“When the temps start getting into the mid 70’s I’ll start using a variety of live bait,” offered Nederhoff. “Instead of dragging, I will start anchoring on specific pieces of structure.” I like rock piles, log jams, submerged trees, etc.”

During the spawn he is looking more for a reactionary bite than a hunger bite. That’s why he uses live bait. He believes that live bait gives an advantage to the angler because the catfish are bedding down and protecting their nests against anything that could potentially eat their eggs. That live bait is not wanted in the area of the nest.

“You will notice when fishing the spawn that the catfish may just kill your live bait and drop it,” explained Nederhoff. “It becomes a matter of repetition. If you keep a live wiggling bait in front of that trophy, he might make a mistake and reward you with a fish of a lifetime.”

Nederhoff runs a fairly generic terminal tackle rig. Often times, the only difference between one application and another is the length of the leader line.

“I don’t generally switch my gear for different applications,” he explained. “I run 40-pound Slimeline to a 3-way swivel with a duo clip for my sinker of choice. Then I use 100-pound Slimeline Heavy Cover Leader Line with an 8/0 Rippin Lips circle hook snelled to the end to finish the rig.”

“I do change leader lengths for different purposes,” continued Nederhoff. “When I’m running live bait, I usually run around 3 feet of leader line compared to when I’m dragging. When dragging I will use around 2 feet.”

He says he usually baits with live shad or bluegill during the spawn because they are readily available in pretty much every body of water and they work very well.

“Since moving south I do catch more blues during spawn then flatheads,” said Nederhoff. “I believe they are mainly adolescent blues who probably aren’t spawning.”

The spawn will end and Nederhoff returns to dragging, especially if there isn’t any current in the body of water that he is fishing. But this strategy is fairly short-lived.

“When it comes to post spawn, I’ll start transitioning back to dragging bait,” Nederhoff said. “But only until late fall when the water temperature gets to about 60 degrees. Then I go back to targeting specific areas. If there’s current I’m probably going to be anchored or bumping cut and live bait.”

As a conservationist Nederhoff likes to leave the fish alone during the spawn. The catfish will journey to their nesting areas where the females will deposit their eggs and the males will stand guard. The result is more catfish for the future.

“My biggest advice for fishing the spawn is not to,” concluded Nederhoff. “Let the fish be as much as possible so they can do their thing. If you fish, be patient and find the pieces of structure holding fish. Get the bait in there and who knows your next Personal Best might be ready to strike!”