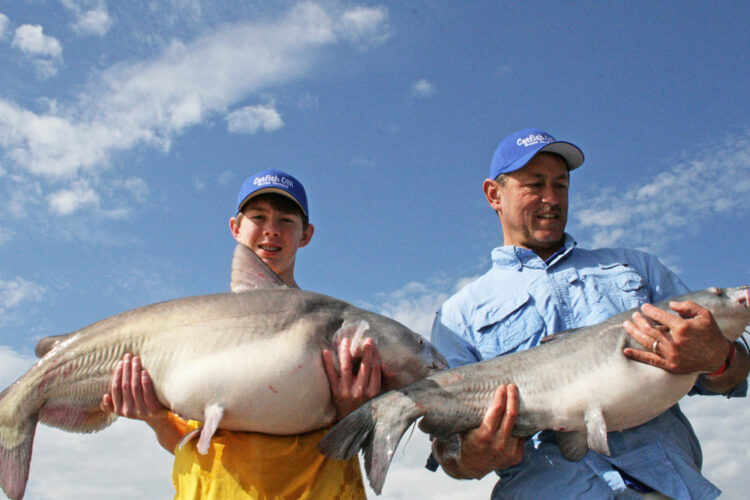 Catching Cats During the Spawn

An open mind is critical to success when fishing for catfish during the spawn.  Big fish will be harder to catch but plenty of quality fish can be caught by anglers with a good strategy.

Catfishing is productive year-round and experienced anglers have strategies for making good catches regardless of seasonal weather conditions. But one time period that’s seasonal dependent, but not related to daily weather, still mystifies catfishermen.

Catfish are caught during the spawn in good numbers by catfishermen who adapt with strategies to cope with spawning cats.

Rodger Taylor is a full-time catfish guide from Rock Hill, South Carolina. He targets lakes Wylie and Wateree on the Catawba River system in North and South Carolina as his home lakes.

Because the spawn on these lakes occurs primarily during June, also a prime month for his catfish guide business, the 59-year-old Taylor has developed strategies that produce when catfish are spawning.

“Catfish are different than many species of fish in that when many species spawn it’s often a prime time to catch them, such as bream and crappie,” Taylor said. “But catfish action does get tough, especially for big fish, so I’ve developed strategies to keep my clients catching plenty of catfish during the spawn.”

Taylor (803-517-7828) said generally his catfish-catching strategy revolves around pinpointing forage and depth preferences to find catfish, but during the spawn that’s not the case.

“When spawning they’re focused on making more catfish, so I have to think and fish creatively,” he said.

Taylor said understanding the timing of the catfish spawn is a key for him. After years of tracking data on these lakes, he’s learned a water temperature of 78 degrees means the spawn is likely on.

“Not all catfish spawn at the same time so I’ve got some leeway on peak spawn timing on both lakes,” he said.

Taylor said water temperatures vary on most lakes from the upper to lower end, meaning one portion of the lake may be in spawn mode but another part may be in late pre-spawn, with the upper end typically warming quicker.

“Pre-spawn means excellent catfishing for me so early in the spawn I’ll search for situations where catfish are not yet in spawning mode,” he said. “As the water temperature finally reaches peak spawning temperature in a specific area, moving to the other end of the lake may mean finding fish willing to bite.”

In addition to moving around on one lake, he’ll move from one lake to the other to find a better bite, then revert back as conditions change.

“Since I’m fishing two different lakes, each with different water temperature conditions, I can often find favorable water conditions for a good bite by changing lakes,” he said. “Targeting two lakes gives me more fishing options throughout the spawn.”

To carry that one step further he said when the spawn is peaking at the lake with cooler water temperatures the other lake may have areas nearing the end of the peak spawn.

“I’m able to find areas where the fish are beginning to get back on a good bite in a post-spawn situation and into the summer pattern,” he said. “This means food is again the priority and I can find reliable patterns.”

Taylor said it’s essential to know when the spawn begins because he changes his primary fishing tactics. Throughout the early spring and pre-spawn, he primarily anchor fishes but when the spawn kicks in he switches primarily to drift fishing to cover more water.

“A a lot of fish are not in play during peak spawn with big females laying eggs and males guarding the nesting sites,” he said. “Covering more water helps but I still fish areas that provide good depth and forage. I’m looking for catfish willing to bite.”

Taylor targets humps, flats, ledges, and deeper holes in the main lake but also drifts feeder tributaries in fairly shallow water. To have more location options he’ll often target the middle portion of the lake early, then move up or down the lake as the daily pattern develops.

While the big fish bite does slow during the spawn Taylor often begins the day from an anchored position to target big catfish.

“Not all the big fish spawn at the same time so anchoring on a ledge, point, or hump to begin the day is my best shot at a huge fish,” he said. “Sometimes it produces, and my biggest flathead ever was caught doing this by a client during the absolute peak of the spawn. But the most consistent bite for me is drift fishing.”

“Tackle during the spawn or anytime will be a function of where you fish and the type of cover fished,” Taylor said. “In some areas, anglers could go lighter, but plenty of lakes and rivers require much heavier tackle. Fit the tackle to the water you fish.”

Taylor said the best baits for targeting spawning fish will vary but he prefers fresh cut bait from the lake he’s fishing.

“Cut bait is very effective for me during the spawn,” he said. “I’ll use fresh cut bait and gizzard shad is always a good bet for me. I do downsize the bait during the spawn.”

Taylor’s summary of fishing during the spawn is simple.

“Be open-minded about big fish during the spawn,” he said. “I’m grateful for every fish we catch at that time, but the big fish bite is tougher, so I adjust expectations accordingly. Big fish are still in play and numbers of fun-to-catch sized fish are realistic. Do not avoid catfishing because of the spawn, adapt to the situation.

“I love the challenge and figuring it out,” he said. “Having a successful trip during the spawn is rewarding. But and another reward is that I usually learn new tactics or places that help me catch catfish the rest of the year.”