Why We Catfish: A Guest Editorial by Wade Rose 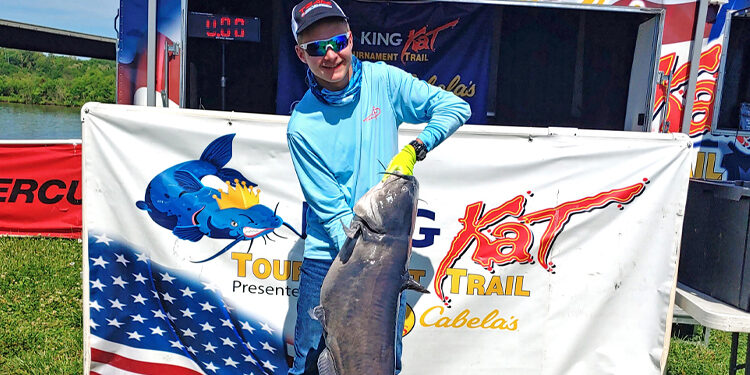 Jordan and I started catfishing together in February 2020. It all came together after we saw pictures of huge catfish on a Santee Cooper Lakes website. Jordan was 13 years old at the time and he wanted badly to catch one of those gigantic whiskered fish.

Although I was 51 years old and had fished all my life, I had no idea how to catch such a monster, but I knew this would be a great activity for the two of us.

Next, we saw a Cabela’s King Kat Tournament advertisement. We checked it out and both decided that we were going. Our Clintwood, Virginia home is only about 5 hours away from Santee, one of the best catfish lakes in the world. We hitched up the pontoon boat and took off.

Our boat had no rod holders, not a single rod with more than 10-pound test line, not a single hook over a number 2, no peg floats, no drift net, only a front anchor, and had no idea what a Santee rig even looked like. We made it to the lake and bought 3 dozen nightcrawlers and some stink bait from the local retail store. Needless to say, we saw a lot of big fish at the weigh-in, but never caught one.

We were a little disappointed but we were determined. As a school teacher, I am on the same schedule with Jordan so when our school shut down for the spring, we decided to keep entering catfishing events.

A couple of tournaments later we met a great group of family and friends that steered us on the right path to catch some trophy cats. Donnie Fountain, Lonnie Fountain, and Ray Ferguson stayed at the same hotel as we did for the King Kat Tournament on Lake Wylie.

One evening these well-respected and knowledgeable catmen showed us everything we needed to know about bait, fishing rigs, and techniques. After the tournament, we bought an old bay boat to fish out of and rigged it for catfishing. After a year, we are just now becoming competitive in the tournaments and we certainly have to thank our new friends for helping with that.

Now that we are actually catching decent catfish, I realize that Jordan and I are the ones that are hooked, not the catfish. There’s hardly anything cuter than a 20-pound flathead wiggling, grunting, and fussing at you when you pull him out of the water.

However, there is nothing better than the feeling when you return him to the lake and watch him hurry back to his hideout. We would never want to harm one of these beautiful creatures and you don’t want to ask Jordan about pay lakes without expecting an earful.

Catching a cat is definitely fun, but for us, catfishing is about more than fishing. It is an activity that bonds us together and requires teamwork to do all the necessary tasks involved. We tie hook lines together at night, work on the boat in the day, travel to different parts of the country on the weekend to compete in the King Kat events. When we fish we work as a team to catch, reel in, and net the fish.

We even love the traveling and visiting every bait or tackle shop located on the trip route. The people of our little community in Clintwood, Virginia also seem to enjoy hearing about our trips. They ask us daily, “Where are you going next?” They also ask, “How big is the biggest catfish Jordan has caught?”

Currently, he is proud to say that it is a 41-pound blue that he caught on 30-pound line. His eyes light up when he talks about it and it is obvious how much he loves the challenge of getting one that size in the boat.

Catching the big fish is certainly the “icing on the cake” so to speak, but I really think that catfishing for us is just about good father and son time together. The world seems a little simpler when we are sitting on a catfish hole together.

Note: Jordan Rose is a young catman to keep your eyes on as he follows a passion for catfishing. In his first year of competition on the Cabela’s King Kat Tournament Trail, he earned the honor of Youth Angler of the Year.