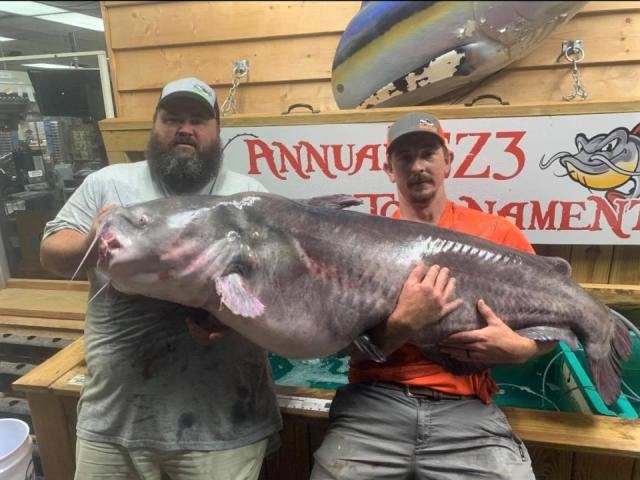 Rocky Baker (left) was fishing with his buddy Justin Ryan Clifton when he set a new NC state record for blue catfish.

A fishing trip taken for pleasure turned into the stressful experience of
catching a state record blue cat and getting it certified.

The North Carolina state record for blue catfish fell recently when Rocky Baker boated his monster blue from the Roanoke River in the early evening of July 10, 2021. Baker was pleasure fishing with his friend Justin Ryan Clifton. The pair had a pretty good bite going when the monster catfish hit.

Baker and Clifton launched the 2072 SeaArk during the daylight hours with the intention of fishing into the night. Their strategy was to begin fishing heavy structure because air temperatures were still very hot.

“We were focusing on heavy structure,” explained Baker. “Before the big fish hit we had already caught a 51 pounder, another close to 40, and a few in the 20s. We wanted to continue into the edge of dark bite and that’s when the big fish bit.”

Baker and Clifton had cast 10 rods into the darkness and placed them in MulTbar Rod System. They were baited with gizzard shad. It was their first spot after the sun went down. Given their tight drag set and the way the rod slammed over at about 9:40 pm they were pretty sure they had a good fish.

“I saw the rod get slammed,” said Clifton. “I told rocky to grab it and once he started fighting the fish I knew it was a nice one. We just weren’t expecting it to be as big as it was. I was figuring an 80- or 90-pound fish but never thought it would be 130 pounds.”

“It didn’t take long to know,” confirmed Baker. “Once we hooked the fish we could tell instantly that it was going to be a great fish. I was thinking 80-pounds plus. The fish fought for a solid 20 to 30 minutes. It crossed the river back and forth several times before it got close enough to see. At that point, we were kinda freaking out. It looked like a baby whale.”

“Once it got close to the boat we knew we had something special,” continued Clifton. “When we got it over the rail and it hit the floor you could only imagine the excitement we were feeling. It took a minute for us to realize what had just happened.

When the excited anglers got the fish to the side of the boat they were able to get the head in the net. Then, they had to manhandle it over the side and into the bottom of the boat.

“We were like holy crap it’s huge,” recalled Baker. “So we attempted to weigh it with my 110-pound scales. We didn’t get the fish off the bottom of the boat and the scales were reading “overloaded.”

With no livewell to accommodate the fish, they pulled in all the lines and headed for the ramp. They tied the fish off to keep it in the water and started making phone calls for help. They were able to reach a friend, Brent Townsend, who came to the ramp with a livewell system.

Townsend also brought a Crane Scale and a weigh-sling to get a better weight. They placed the big blue in the sling and the reading bounced from 130 to 140 pounds, further raising their anxiety.

“When we saw that weight we were freaking out,” admitted Baker. “Those are world-class numbers. So we decided to take the fish to EZ Bait and Tackle in Goldsboro where they have a certified scale and a big aerated tank. It was a 1 ½ hour trip.”

After reaching the EZ Bait and Tackle at 1:15 am Sunday they placed the fish in the shop’s bait tank to recuperate. Another attempt at weighing indicated 130 pounds. Baker and Clifton made phone calls to everyone they knew trying to reach Dewayne Bevil the owner of the tackle shop and Ben Ricks a state biologist.

“Bevil arrived about 4 to 4:30 am,” reported Baker. “He had talked to Ben Ricks and was to confirm our catch before Ricks made the drive of more than an hour to Goldsboro.”

Bevil made the call and confirmed to the biologist that they had a monster fish and that he should come on over. In the meantime, Bevil gave the anglers access to extra air pumps, ice, anything they need to nurse the fish while they waited on the biologist.

“So we nursed the fish till about 5:30 am,” said Baker. “The biologist arrived and proceeded with weighing and measuring the blue. When complete, he confirmed it was a new state record at 127.1 pounds.”

With the adrenalin running high, Baker and Clifton loaded back up and hauled-tail back to the Roanoke River to make the release at the ramp where it all started.

“We got it out and nursed it,” concluded Baker. “We laid on the boat dock and held it until it was feeling good enough to go. The certification process made the experience less enjoyable for me. We do not keep any fish. We take pics and release them all. The last thing we wanted to do was kill the fish, and thankfully we didn’t.

“It was just a crazy night full of a roller coaster of emotions,” said Baker a couple of days after setting the new North Carolina state record for blue catfish at 127.1 pounds. “In retrospect, I wish we had a least kept a livewell in the truck for this situation. It could happen to anyone and it would be a good idea to be a little more prepared. Also, I wish there was a better hotline or some way to contact a biologist through the night. It would not be so stressful on the fish if we could shorten the wait and get everything done quicker.”