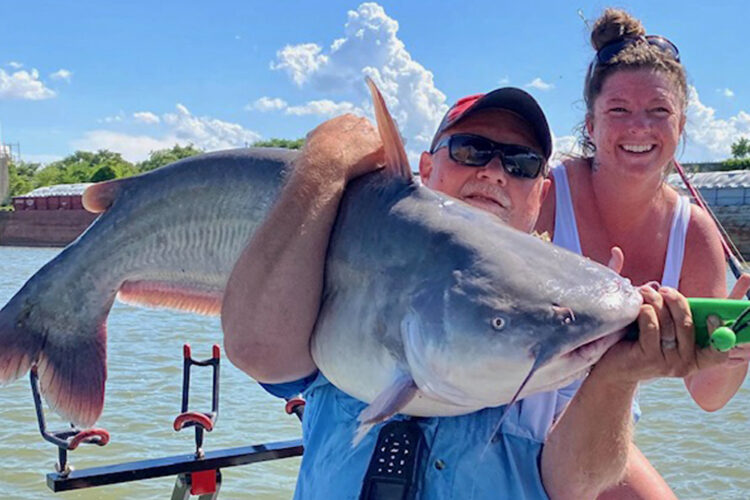 Capt. Terry Rogers and his client with a 63-pound blue catfish on the Ohio River.

Targeting Trophy Catfish in the Ohio, Kentucky, and Tennessee Region

What Lady Catfish Anglers Can Find by Fishing the Ohio, Cumberland, and Tennessee Rivers

There’s more that connects Ohio, Kentucky, and Tennessee besides state borders. The states share the waters of three of the most prized catfishing rivers in the country: the Tennessee River, Cumberland River, and the Ohio River.

“They all have great trophy catfishing potential if you know where to look,” said Captain Terry Rogers who owns Hooked-On-Cats Guide Service in Kentucky and guides on all three rivers.

Each river system has unique characteristics with pools and lakes that offer prime fishing opportunities to catch trophy blue, flathead, and channel catfish, but the other appeal of this region is the close proximity of these rivers to one another.

“The Cumberland River and Tennessee River dump into the Ohio River which dumps into the Mississippi River within about 25-miles. That’s three of the top five rivers in the U.S. for catfish in that small stretch together,” said Aaron Wheatley, founder of Monsters on the Ohio catfish tournament.

My first time fishing on the Ohio River with guide Aaron Wheatley resulted in pulling in my personal best. It made me curious about the potential of the other rivers in the region that are known to draw big-cat anglers and tournaments.

My time on the Tennessee River was productive too. I landed large numbers of trophy blue catfish in one trip. The Cumberland River is next on my radar.

These three rivers are thrilling and rewarding. As more female anglers get into the catfishing game these are ideal rivers to target and experience the thrill of pulling in what could likely be a personal best with productive days on the water.

The Tennessee River is one of the top destinations for the quantity of monster-size catfish that anglers can catch in one trip. It winds through Tennessee and Alabama, borders Mississippi, and ends in Kentucky. Dams along the Tennessee sections create large slack water lakes with various water depths and structure making it almost a sure shot for catching trophy fish.

There are other reasons that the Tennessee River is prime for catfishing: healthy populations of large fish; plentiful skipjack bait; fish that grow faster in the warm southern water, and almost no current.

When to go: Drift-dragging is productive any time of the year and winter is optimal for anchoring. Avoid the spawning season from the last week of May through mid-July.

The Cumberland River does not produce the quantity of 90–100-pound fish that the Tennessee River does but anglers can walk away happy with lots of fish in the 30–60-pound range. It starts in Kentucky, goes into Tennessee, flows back into Kentucky then dumps into the Ohio River.
“You will find good fishing year-round on this river,” said Rogers. “Target the river bends, creek mouths, and deeper holes with structure.”

The Cumberland River also produces lots of baitfish, has a slower current, and excellent topography with deep water, shallow areas, lots of structure, ledges, and a defined river channel.

Where to go: Some of the most notable spots along the river are Old Hickory Lake (TN), Cheatham Lake (TN), Barkley Lake (KY), Percy Priest (TN), Cordell Hull (TN), and near Smithland, Kentucky where the Cumberland meets the Ohio River.

When to go: The best time for fishing the Cumberland River is late spring, early summer, or early fall. Winter fishing is preferred by some because of the slower current and fewer boats.

The Ohio River struggles with its trophy catfish populations due in part to commercial fishing over the years when no regulations were in place. You can still catch big fish, but it requires more strategy and knowing where to go. The river runs west from Ohio along the borders of Kentucky, Indiana, and Illinois and east along the West Virginia border and into Pennsylvania.

Aaron Wheatley has fished the Ohio River in Kentucky for more than 15 years and is a known advocate for stronger regulations to help replenish the catfish populations. Wheatley started the popular Monsters on the Ohio catfish tournament in 2009 to give him a voice on the legislative level.

“Guys were coming to fill their pay lakes with fish and targeting them with nets and trotlines with 150 hooks. We kept seeing videos of 5000-6000-pounds of fishing being dumped into these pay lakes,” said Wheatley.

There are now some regulations in place, but Wheatley would like to see them expanded. The Ohio River is still a great river to fish and what it lacks in quantity of trophy catfish is made up for in smaller sizes.
“In the lower portion where I guide, we still have great fishing with several trophy size cats put in the boat every year. We boat many blues each year that are over the 50-pound mark, but our average everyday fish usually run in the 10-30-pound range,” said Rogers.

Where to go: The lower portions of the Ohio River, the southern pools into Kentucky, are best for trophy catfish where there is warmer water, accessibility, and the convergence of multiple river systems.

When to go: The best fishing on the Ohio River is during the pre-spawn in May and post-spawn in August. Avoid June during the spawn. July – November offer slower current while other times of the year are unpredictable.
If you are new to these rivers, especially the Ohio River which can have turbulent water and barge traffic, consider hiring a guide for your first outing to understand the river dynamics and learn where to go.

Like fishing any new location, it is important to do your homework. Using tools like LakeMaster or Navionics fishing maps can help you study the contours and water depths of specific rivers. Google earth is another great way to hone in on the sections of rivers you want to navigate.