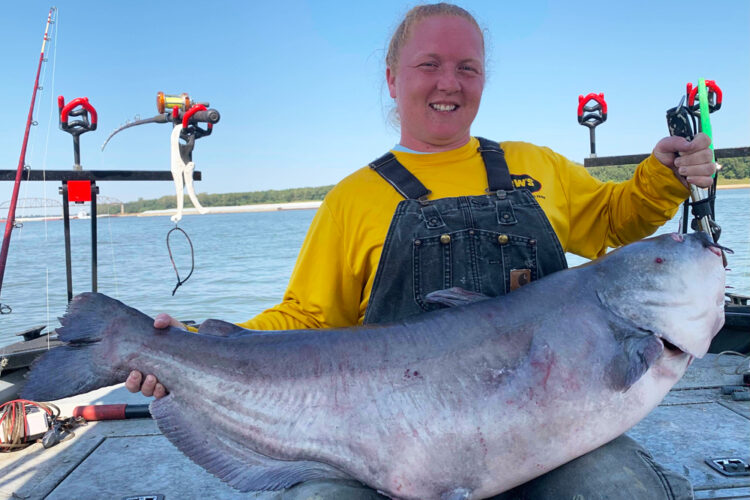 Successful trips with guides results in women hooked on catfishing.

As the popularity of catfishing rises, women participating in the sport are increasing too. Catfishing may even be leading the way as more and more women join their male counterparts on the bank and in the boats.

From tournament anglers to recreational anglers, women are making up a larger part of the total. According to the Recreational Boating and Fishing Foundation (RBFF), the growth of female participation in fishing has been on a slow but steady rise since 2017 and catwomen are making up a good portion of the increase. Part of that increase is driven by guides taking the ladies fishing.

Felisha Smalley is one of those women who discovered catfishing while fishing with a charter captain. Terry Rogers operates the Hooked On Cats Guide Service (270-210-4308) in Kentucky.

Felisha’s husband Brian came to fish with Rogers a couple of years ago. That first adventure was with friends but afterward, he decided he’d like to bring his wife on the next trip. Felisha and Brian are repeat customers at Hooked On Cats Guide Service.

“It was my first ever catfishing trip,” recalled Felisha. “So I didn’t have very high expectations. I did expect to catch fish but I never expected to catch a big fish.”

“The fishing took place near Wickliffe, KY,” offered Rogers. “We were at the confluence of the Ohio and Mississippi Rivers in Western Kentucky. After catching several nice cats, Felisha hooked into a nice trophy blue cat. We were doing a controlled drift in about 45-50 feet of water when a 61 pounder slammed a piece of fresh-cut skipjack.”

“Oh my God,” said Felisha as the big blue was boated. “I was shocked to see how big it was when I got it to the surface. I had a huge adrenaline rush as I fought to get it in.”

“Terry knows his stuff and he’s a great guide,” continued Felisha. “From our first day out I was hooked. I knew this was something I wanted to continue to do. We actually planned a second trip for April.”

When that April 2021 trip rolled around, Rogers had upgraded to a new SeaArk Pro Guide boat and Felicia was destined to hook up with another trophy cat.

“Felicia and Brian came back this past April,” reported Rogers. “We were fishing the same area and using the same technique of drifting. About the only difference was that this time Felicia’s big cat would come on fresh-cut mooneye.”

Lady luck was with the group and history would near repeat itself. The couple landed several nice fish and Felisha landed another trophy blue cat weighing 55.5 pounds to re-ignite her thrill of catfishing.

“Pig in the boat, baby,” shouted Felicia as she high-fived Rogers and her husband. ”Brian, you aren’t going without me anymore.”

Needless to say, she is now hooked on catfishing. They have another trip booked with Rogers for October.

Buddy Bradham, a longtime Santee Cooper Guide remembers the hard time he was getting from a repeat guest on his boat. This lady just wasn’t going to be happy until she got a 50-pound fish just like her husband Danny had caught with Bradham.

“I fished for a number of years with Danny and Winkie Wilson,” recalled Bradham, who operates Santee Flathead Guide Service (352-277-6134). “Danny had caught a couple of 50-pound flatheads, but Winkie had never broken the 30-pound mark. Since Danny had caught bigger fish than her, she wanted a bigger one.”

“Who wouldn’t want to catch a big one,” joked Winkie. “We always caught a lot of smaller cats at home on the James River. But I was always driven by the desire to catch one bigger than my husband,”

Well, that day was going to come for Winkie while fishing with Capt. Bradham. He knew she wanted to catch a fish bigger than Danny and worked to make it happen.

“It was a day like any other as we were looking for fish in the dead forest (the name given by locals to Lake Marion with all the trees still in it),” recalled Bradham. “It was in the days of paper graphs. I could tell more from the old paper graphs than I could on the first LCD graphs.”

Bradham was one of the last guides to use the old paper graphs. He claimed to be able to tell you what a flathead weighed by the mark made on the old paper graph. As he searched among the flooded trees he found a group of 6 flatheads in about 25-30 feet of water. He spotted two really big fish in the bunch. All the while, Winkie was giving him a hard time about catching her 50-pound fish.

“After finding that group of fish we anchored up,” continued Bradham. “We baited with white perch and in a short time, a rod went down. Winkie grabbed the rod and began to reel. She finally had her 50-plus pound fish.”

While she fought her trophy the crew caught three more flatheads but that didn’t matter to Winkie because she had her fish and it was bigger than Danny’s.

“Buddy showed me the pictures of the fish being burned onto his old Eagle graph,” recalled Winkie. “After getting that hog in the boat he tore out the image on the graph and gave it to me. What a beautiful fish. It was an awesome feeling to catch a fish of a lifetime with Buddy.”

“Buddy was an awesome guide,” concluded Winkie. “Now I am hooked on catfishing. We couldn’t wait to go fishing with him each year. We made some beautiful memories with Buddy!”

The scenarios played out with these two guides and their lady guests have occurred over and over again as passionate guides take lady anglers fishing. More often than not, once the ladies experience the thrill that comes over them when they catch a nice fish they become catfish anglers for life.

Another factor influencing the women is the opportunity to spend time in the outdoors with their families. It is an opportunity to relax and unwind as they fish with their partners and teach their kids about the great outdoors. Given the many benefits of the sport, it should not be a mystery to anyone that women are becoming a large and important part of the catfishing community.