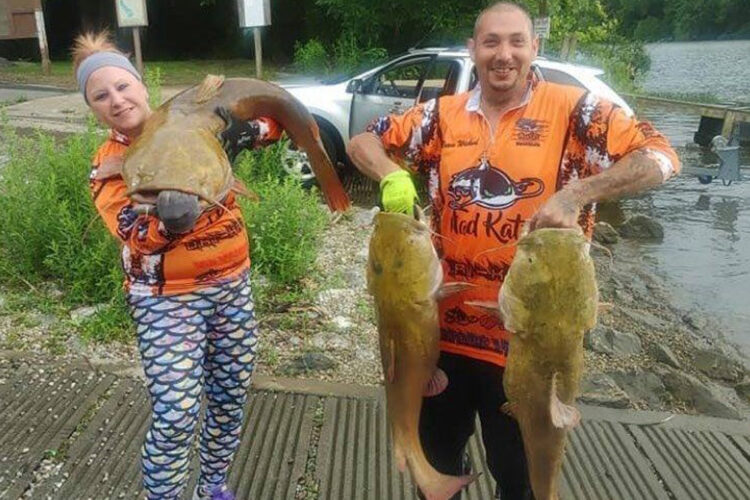 Saving Catfish One at a Time— The Alexis “Lex” Aguilera Story

Conservation-minded and proud of it!

Alexis “Lex” Aguilera came by her love for the water naturally. She is a proud lady angler from Pennsylvania with a penchant for conservation. Her father served in the Navy and often told Lex stories about his scuba diving adventures. She attributes her kinship to the water and her love for marine life to those stories she heard as a child.

“I have always been fascinated by the water and everything living in it,” offered Lex. “I was nicknamed “the little mermaid” growing up because you could always find me playing in or near the water.”

The fishing part came later for Lex. Her dad took her fishing at 6-years-old. As the story goes she caught her first bullhead catfish but never fished again until she was 36 years old when she went with her husband, Captain Samuel Aguilera.

“My amazing husband took me out fishing for flathead catfish,” recalled Lex. “We caught a bunch of smaller flatheads and I fell in love from that point on. I wanted to learn all that I could about them. I learned that they go into a hibernating state in our home waters of the Susquehanna River in Pennsylvania. I was sad that I couldn’t fish for them all year long.”

Samuel noticed the love that Lex had for the flatheads and decided to introduce her to blue catfishing on the Potomac River. She caught her first blue and another love affair began.

“My first blue weighed 40 pounds,” revealed Lex. “I caught it right outside of Washington, D.C. A few months later we went to the James River in VA and I caught a 65-pound blue. My love intensified for these amazing fish. I felt like a mermaid hugging a dolphin with that fish!”

Lex continued to study the flathead and blue catfish and decided to try tournament fishing.

Recently, Sam and Lex have participated in several big tournaments all along the east coast. Lex has joined several catfishing-related groups and pages on Facebook. She loves seeing the monster catfish that are posted and the happiness that is demonstrated and documented by the anglers making the posts.

“We have met some amazing people through catfishing,” suggested Lex. “We refer to the catfishing world as our family and we call our fellow anglers our fishing brothers and sisters.”

As she continued to learn about catfishing something started to bother her. She began to notice that not everyone showed the same love and respect for the fish as she did. Not everyone released their trophy catch and some handled the fish badly.

“Noticing some of the practices of other anglers made me sad,” Lex said. “It was like they didn’t understand how that trophy fish could bring joy to another angler in the future.”

As time went on, Lex began to associate with other anglers that shared her respect for the whiskered fish. She mentions Paula Cathy Smith as one of those lady anglers who also studies and promotes the protection of trophy size fish.

“I try to pass on any information I learn to others,” declared Lex. “Every angler has a favorite bait fishing spot, or a favorite rig, or favorite area to fish. But if you have 20 of them don’t be afraid to give up at least one secret spot. You never know who might take out their 80-year-old grandpa or 5-year-old nephew and get them on a fish of a lifetime. To me, fishing is about happiness. I think fishing can help make the world a happy place for everyone.”

The more she learned, the more she began promoting conservation principles like selective harvest, CPR, and fish handling in general.

She understands that catfish is good eating and some anglers catch them to feed their family. She is not against anyone eating fish. She does however hope to see more people start releasing the trophy fish, those that weigh more than 30 pounds.

“Anglers need to understand that releasing the trophies is good for the future of catfishing,” preaches Lex. “The most important decision to me is to Catch-Photo-Release (CPR) any cat bigger than 30 pounds. My goal is to protect the bigger fish and put a regulation on fish weighing more than 30 pounds.”

Fish handling is also an important issue to Lex. She uses noodling as an example, but it is just as important in rod and reel fishing and especially in tournament fishing.

“I’m a rod and reel angler only,” advised Lex. “Noodling is illegal in Pennsylvania but I see examples on social media. Many catfish that are noodled end up having complications or die later, mostly from poor handling.”

“It is very important to hold any fish correctly,” continued Lex. “I’ve seen online photos and people at tournaments holding their fish through the gills. The delicate red gills of a fish make up its respiratory organ and are equivalent to the human lungs. They are responsible for extracting the dissolved oxygen from the water and excreting the carbon dioxide. Damage to the gills is likely to cause the fish to die. With that said, I believe the best way to hold a fish is by the mouth while supporting it horizontally.”

Lex often makes her point about the importance of conservation and how anyone can contribute to the cause with a story she read a few years ago.

“It’s a short story called Making a difference,” said Lex. “It’s very relevant to my story and how I hope I can make a difference. The story went something like this.”

An old man walking along the beach came upon a little boy sifting through debris. Every so often he would see the boy pick up a starfish and toss it back to sea. The old man asked the purpose of his efforts. The boy told him that the tide has washed the starfish onto the beach and that they will die unless he threw them back. The old man looked at the miles of beach and said there are more starfish than you could ever save, you cannot make a difference. The child bent down to pick up another starfish and sent it back to the sea. He looked up at the old man, smiled, and replied, “I can make a difference to this one!”

“That is the end of the story but not the end of its impact,” concluded Lex. “I haven’t been fishing for years like some, but I hope my story will make a difference—even if it’s only one catfish saved! Thank you for allowing me to share my journey!

Editor’s Note: Lex and Samuel are submerged in the catfish world. In addition to fishing for fun and tournament fishing, they own Wicked Fishing Company. They sell apparel and offer charter fishing trips for flathead catfish on the Susquehanna River in PA. Conservation has become very important to both of them and they continually encourage others to practice catfish conservation. They are supported in their efforts by Mad Katz Outdoors/Mad Katz gear where they serve as prostaff anglers.