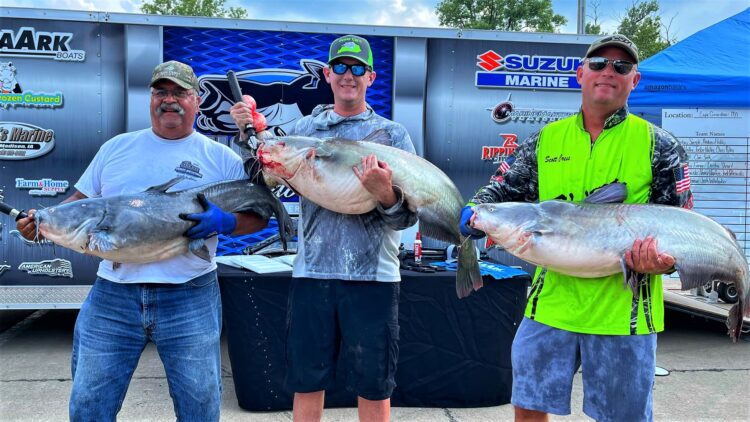 Sixty-one teams traveled from several states to Cape Girardeau, MO to fish the Twisted Cat Outdoors tournament trail event. The Mississippi River normally produces some nice fish and it did not disappoint. The tournament grew from 28 boats last year to a record 60 boats for the 2021 slugfest.

The livewell check and launch took place out of Red Star Access beginning at 5:30 on July 18, 2021. The skies were still cloudy from recent rains but further precipitation had been taken out of the forecast by launch time.

Fishing ended at 3:30 when the anglers returned to Red Star Access where they could weigh a 3 fish limit with all state and federal laws observed. 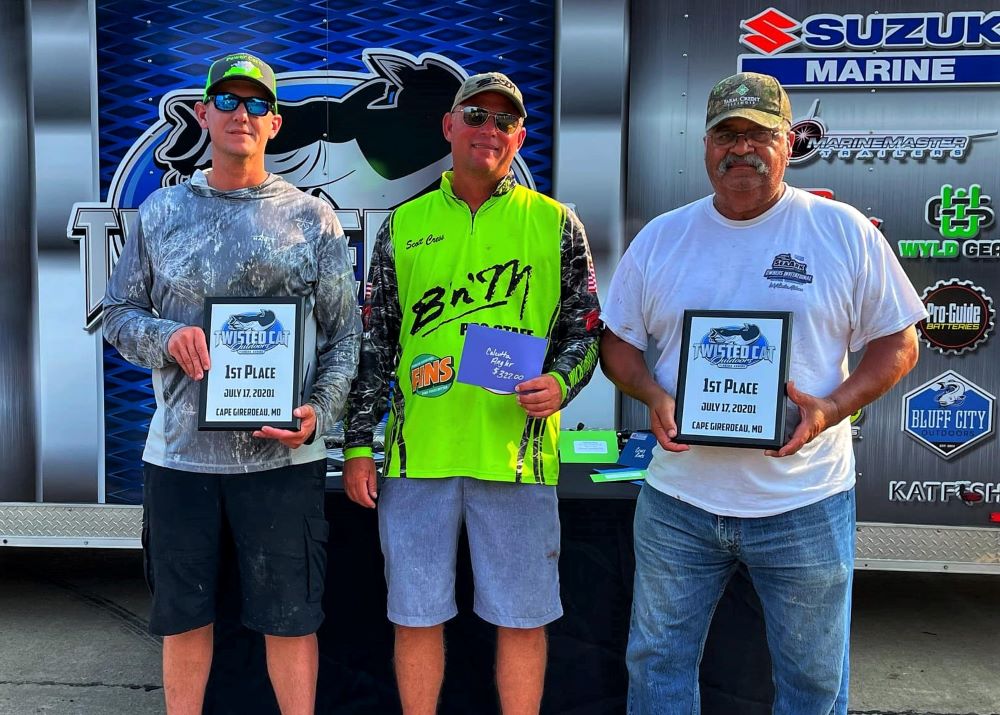 Rob Benningfield, Scott Cress & Rusty Morris teamed up to take the top spot at Cape Girardeau, MO with a total weight of 127.61 pounds. They launched Benningfield’s Lund into the Mississippi River that was running high from recent rains. 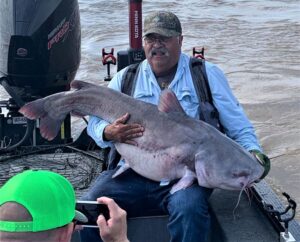 Although friends for a long time, Benningfield and Cress were fishing as partners for the first time. Prefishing served to build confidence in the tournament to come when Rusty “Frog Legs” Morris caught his personal best blue. The pre-tournament fish weighed in at 75 pounds.

“I had only fished the Mississippi a couple of times,” informed Morris. “So when I hooked up I thought it felt like a good one but it wasn’t a thumb burner like you would think. Rob didn’t seem too excited and said, ‘Get him in close and I will use the Boga grips.’”

“As we got the fish in closer it just kept feeling and acting bigger,” continued Morris. “Then, as he got close to the boat Rob decided it might be over 30 pounds so he picked up the net. When we got him in the bottom of the boat he looked like a Hawg. When you get a slam down on the Mississippi it can be any size!”

With that prefishing experience behind them, the team hit the water on Saturday morning with bumping rods in hand.

“We found our fish in current seams,” reported B’n’M Poles prostaffer Cress who was fishing his first Twisted Cat event. “We were bumping 30 to 50 feet of water. I have to give credit to my partner Rob Benningfield for having a great eye and knowing how to read the water.”

“On the Mississippi River I’m always looking for the water that feels right,” explained Benningfield. “By that I mean I want an area with the right depth and current speed and preferably some current speed changes. It’s hard to describe and I can’t pick it out by looking at the water or depth finder but I know it when I feel it.”

“It’s a combination of how fast the boat is moving, the trolling motor speed and how fast your bait is moving. You really have to fish a bank to see what the current is doing and pay attention to how your bait is moving. The fish seem to be in the areas where it gets just right. For us the fish were in 30-50 feet of water,” confirmed Benningfield.

“The high water was kind of weird,” added Cress. “It didn’t make the current too fast but changed where the ‘right’ current was. You didn’t want to be in current that’s too fast or too slow. The bite was good for us but you had to keep the bait in sweet spots for as long as possible. We caught 11 fish on tournament day. Nine were more than 20 pounds.”

The team did not report anything unusual but did say they were fishing some areas that would normally be 12 to 15 feet lower and the fish preferred skipjack body chunks to heads.

“This was my first Twisted Cats event,” concluded Cress. “Alex Nagy does a great job. I look forward to fishing more of his events.” 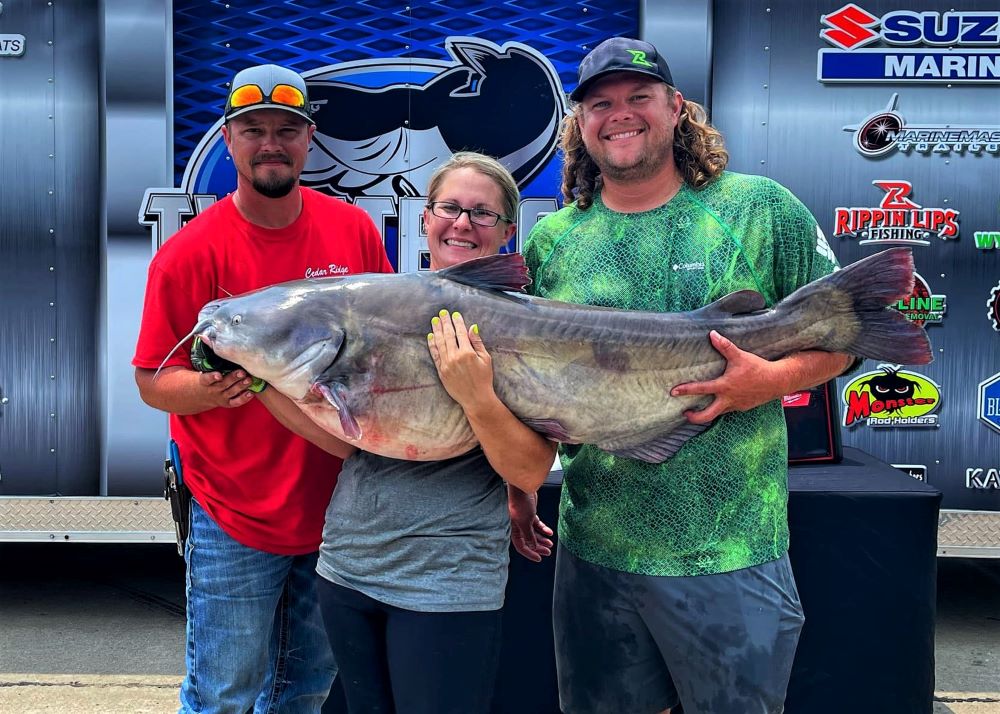 Big Fish honors went to Bradley Monnig, Rachael Monnig & Briar Hoffman. They caught the big fish early and brought it to the scales so they could make an early release. The big blue pulled the scales to 65.77 pounds.

The team was fishing in about 40 to 50 feet of water. Rachael Monnig was on the rod when the big blue bit a skipjack head.

“We had trolling motor issues off the bat,” reported Hoffman. “So we anchored fished all day. The big one came off the end of a wing dike in fast current. It was fast enough current that we had to pull anchor to float along with the fish to get it in.”

The team went back to fishing and later tallied a tournament total weight of 82.58 pounds to finish in 4th place overall.

Final Thoughts
“Cape Girardeau was a great event,” said Tournament Director Alex Nagy. “There were 61 boats and 144 anglers. We weighed 111 fish that totaled 1766.93 pounds. There were lots of fish caught and the anglers brought them in healthy.”

For more information on Twisted Cat Outdoors visit their website or follow them on Facebook. Their next tournament will be out of Canton, MO on September 4, 2021.