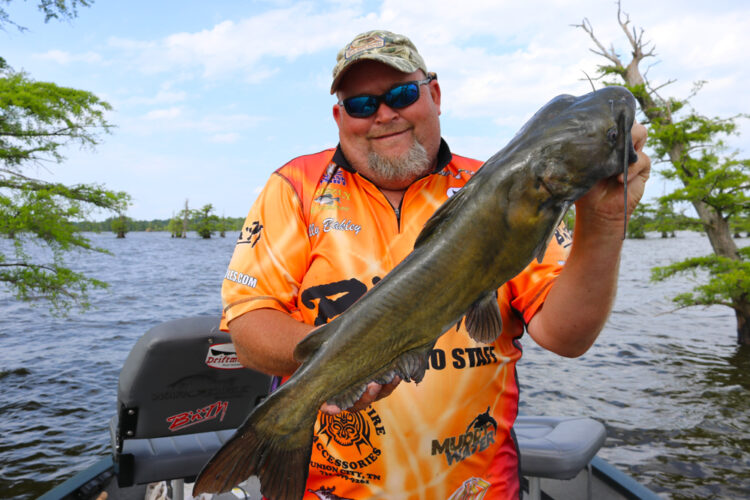 No one overlooks Tennessee’s Reelfoot Lake as a fishing hole. It’s a bucket-list destination for anglers, and folks gladly drive for hours or even days to spend time plying its legendary water. Most come for giant bluegills or crappie, though, with a fair number also coming to cast bass lures around cypress trees and lily pads. What tends to get overlooked is an outstanding catfish population that provides dependable action throughout the warm months.

Local anglers know about the catfish, and a small percentage of visiting anglers return regularly with cats in mind. Still, catfish get far less attention than other species, and you’re very unlikely to find a crowd of anglers when you go looking for catfish. What you will find are plentiful channel cats and a splendid setting.

Channel catfish dominate the cat population at Reelfoot. Most fish weigh 2 to 5 pounds, but 8- to 10-pound fish show up frequently and notably larger cats are caught from time to time.

Reelfoot also supports a population of flatheads, including some extremely large fish. However, these tend to be bonus catches that happen when one grabs a channel catfish angler’s night crawler or a crappie angler’s minnow. I’ve seen the latter happen, except without the catch. It was a very short encounter with an abrupt parting of ways!

Reelfoot spreads across 16,000 acres but averages only 5.5 feet in depth. The lake formed when a series of earthquakes in 1811-1812 caused the Mississippi River to flow backward and leave its banks, flooding a group of forested swamp basins. Vast cypress stands, countless stumps and flats covered with lily pads and other vegetation characterize the lake, with each basin a bit different than the others and all connected by canals.

Billy Blakley, manager and head guide at Blue Bank Resort on Reelfoot Lake, and a lifelong Reelfoot angler, begins targeting channels around mid-spring and fishes for them as often as anglers want to go after them well into fall. He fishes for cats in two main types of areas: cypress stands and flats littered with submerged stumps and downed trees.

Blakley’s basic approach is the same for either type of area. He fishes night crawlers under slip floats, with the float set to suspend the bait just off the bottom around cypress knees or just over most wood on a flat. The float approach is critical for Reelfoot catfishing to spare being constantly snagged. He uses B’n’M Silver Cat Magnum rods, baitcasting reels, and braided line.

Blakley fishes with a single rod, which he keeps in hand. Putting more lines out translates into more snags at Reelfoot and prevents an angler from being ready when a fish bites. When a float goes out of sight, it’s critical to set the hook and start reeling to keep the fish from burying itself in the cover.

On the flats, Blakley often begins by casting to specific deadfalls that have portions visible above the surface simply because he can place casts very close to the cover. He also uses electronics to target specific submerged trees that are not visible. Many fish come from casts that are nowhere near anything visible from above the surface. Blakley has caught countless catfish blind casting over flats, and that was the only way before technology painted such vivid underwater pictures.

“For every tree you see, there are far more under the water,” Blakley said.

When Blakley fishes “in the trees” he puts his float as close as possible to cypress knees or trunks and will only leave his bait in any given spot a few minutes before pitching to the next piece of cover.

“If they’re in there and want to eat, you won’t have to wait for them.”

It’s worth noting that not all cypress trees are created equal. Blakley targets trees that have complex structures of knees and/or slightly deeper water around them. He also looks for trees that are “whitewashed” from anhingas perching above and “chumming” the water.

Sometimes finding the best trees is simply a searching game that involves staying on the move until the fish provide a reason to slow down.

No Boat? No Problem

Although many anglers go out in boats, the catfish make heavy use of cover along the edges of Reelfoot’s basins through the summer, especially in the evenings and overnight, opening opportunities to fish from docks.

The docks at Blue Bank offer outstanding summer night catfishing, and this becomes a popular summer activity, especially for family groups. It’s simple fishing, and trips can be as short or long as is fitting for attention spans. The basic approach is the same as what tends to work best farther out in the lake. Fish a nightcrawler under a slip float so it suspends just off the bottom, cast it out and be ready to set the hook when the float darts out of sight.

Blue Bank Resort offers everything an angler could want, including a range of accommodations, great food, boat rentals, bait and guide service. Because many anglers prefer not to subject their boats to Reelfoot’s stumps and many visitors don’t own boats, Blue Bank has a fleet of rental boats that are well suited for the lake and offers fishing packages that include room, boat, motor, gas, bait and ice. Plus, Blakley and other guides are often around the docks and can provide timely tips on areas to fish.

In addition to a Tennessee Fishing License, a Reelfoot Preserve Permit is required to fish Reelfoot Lake. Tennessee has no harvest limit on catfish of less than 34 inches in length. The limit for 34-inch plus catfish of any species is one.