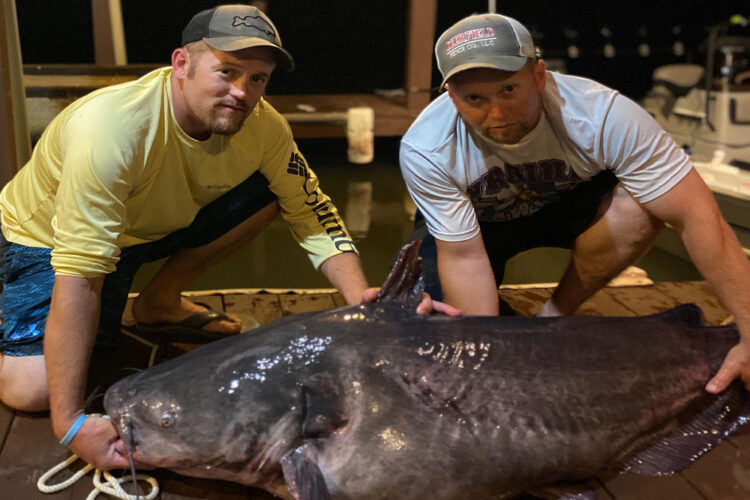 Baird is shown here with his North Carolina state record blue cat from Lake Gaston. He caught the 121-pound, 9-ounce blue catfish in July of 2020.

Adapting to what life has to offer.

Joey Baird’s passion for fishing started at an early age. It was his father and grandfather that introduced him to the outdoors and what it had to offer. To paraphrase Mossy Oak founder, Toxey Haas, Baird’s passion became an obsession.

“As a child, I lived for hunting and fishing,” recalled Baird. “Growing up I was either in the woods or on the water with my dad or my grandfather. We didn’t have a lot of money growing up but one thing was for certain, we had what we needed and we spent a lot of time outdoors. And to me, nothing else mattered. That passion started with a tradition that was passed on to me and will be passed on to my children as well.”

Baird’s love for catfishing was bestowed on him by his family. Not only did they teach him to catfish, but they also taught him to respect the sport.

“Catfishing was always my favorite growing up and still is,” continued Baird. “My father always targeted stripers with his guide service. While he would be fishing for stripers, I would take the dead shad and fish them off the front of the boat for cats. I learned how to read a fish finder at an early age, I would say 9 to 10 years old. I can remember dad always having to change the paper rolls out on the Lowrance when it was empty and keeping the rolls for references later on.”

In recent years he was influenced by other anglers in a changing catfish world. He specifically names Kaleb Page and Tony Cayton with Catch the Fever as influencers in his catfishing adventure.

“These folks are like family to me now,” declared Baird. “I’ve met some good people along the way and I’m proud to be with folks that have good hearts. If you surround yourself with good people, good things will happen. I’m a firm believer in that. For example, I met Dale Lowe through Kaleb and have become good friends and fishing partners along the way.”

It wasn’t until he bought his first boat that he was able to target catfish as he wanted. He was about 24 years old.

“I can remember paying $1,500 for an old bass boat,” recalled Baird. “It came with a 125 HP Force motor on it. I was just as happy as if I had a new catfish boat. The boat allowed me to fish a lot of the areas that I had learned about from dad. But now I was targeting those big cats.”

His chosen career as a law enforcement officer and his own fence company didn’t allow him to fish a lot of tournaments. So over the years, he focused mostly on recreational fishing.

That changed for Baird when he caught the North Carolina state record blue cat in 2020. Lake Gaston, his home waters, gave up the 121-pound, 9-ounce blue catfish in July of 2020. It also increased his drive for tournament fishing.

“I fished my first tournament on Kerr lake in August, one month after catching the state record,” confirmed Baird. “It was the Kerr Lake MaddKatters event and I finished 3rd. This tournament series got me fired up for fishing tournaments. I was meeting new people in the catfishing industry and they were so welcoming. I decided I was gonna’ start putting in more time on the water and spreading my wings to different areas to see if I had what it took to compete against some of the best anglers in the country.”

Given his positive experiences with catfishing, Baird has also developed a healthy respect for the environment and catfish conservation.

“I want to leave things better than when I found them,” stated Baird. “I look at our future generations and I see that we need to practice conservation and protect these fisheries and set forth a good example. If not, we have nothing to look forward to down the road with our children and grandchildren.”

Spending time with Baird suggests that he is a true outdoorsman that loves to hunt and fish. Following in the footsteps of his father and grandfather he has a desire to pass that outdoor tradition on to his children and the next generation.

“Catching the North Carolina state record catfish impacted me greatly,” concluded Baird. “It lit that fire to want to be a better angler, fish more, and to try to have a positive impact in the catfishing community. It also opened the door for me to start my guide business up here on Lake Gaston and Kerr Lake.”

“I will be pleased if I am remembered as a good father, husband, and friend,” concluded Baird. “A person that centers himself and his family around Christ. A person that has worked hard his whole life to make a better life for his family.”

Since 2004 Baird has served and protected his community as a police officer. A few weeks ago he gave notice and hung up his vest, gun, and badge after 17 years of service. He now operates his fence business full time and recently started a fishing guide business on Lake Gaston and Buggs Island Lake. He also volunteers with the Gasburg Fire Dept as a Firefighter/EMT.

As owner/operator of  Blue Persuasion Fishing Guide Service & Sunset Cruises Baird is prostaff for Angler Qwest Pontoons/ Polar Kraft boats, Hookers Terminal Tackle, Catch the Fever/ Big Cat Fever Rods and Slimeline. He has a new passion for the competition of tournament fishing but at the end of the day, he considers his competitors friends that respect one another and hold the same passion for catfishing that he does. He can be reached through his website.