Create Some Channel Cat Memories on the Red River 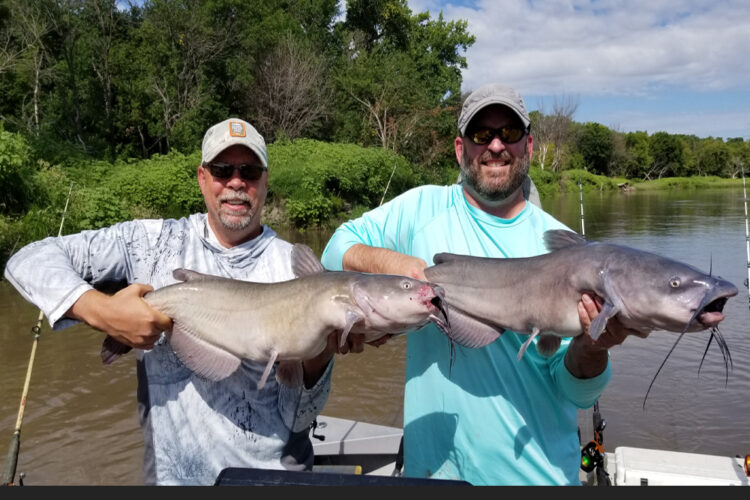 The Red River is known for its flooding. After a huge upstream rain event just two days earlier the river rose 12 feet. Adjustments had to be made. Bo and Pete from Wyoming made lemonade out of lemons for this double.

Late Summer Tactics for Success on the Red River

Late summer on the Red River is a special time. With a little knowledge about the river, it will be even better.

The Red River of the North is world-famous. It is one of the catfish destinations that is a legend to some and a life-long dream trip to others. It is one of the last true “original” rivers in the United States. This is the river that I call home and it is a very special body of water to all those who experience it.

Fishing the Red River is fairly typical and like any other channel catfish river in the US most tactics to catch fish can be used and adapted to existing conditions.

Why is the Red so Great?

There is no short answer to this. Many factors play into what makes these fish so special. First and foremost, there are very tight regulations in both the US and Canada.

Late summer catfishing on the Red River can be one of the best times of the year. Most years it is my favorite time to fish for them.

Understand that catfish can get moody in late summer. If river conditions are not perfect, they can get uncooperative. For example, if river levels are low and oxygen is on the lower side of optimal, catfish become very susceptible to weather conditions. They become almost lethargic and stay off current and do not hunt aggressively unless conditions are almost perfect.

Even a small cold front can put the fish into a funk. They can be caught but you must understand that with sluggish fish comes longer waits. Anglers should expect to soak bait longer to entice the fish to come out and eat.

The bait used on the Red is somewhat unique compared to many other places around the US. White sucker, goldeye, and leopard frog are the three primary baits used on the Red River.

As with any bait, there are times that one is better than another. Angler confidence in baits also plays into their success. Generally, as the days move through July and into August and beyond, any kind of moisture means that there are leopard frogs available. Many anglers fish with frogs as bait exclusively but sometimes are better than others. When frogs are migrating, the catfish will move to more of a night or early morning bite to feed on the frogs that migrate through damp grass.

If there is a drought like we are currently experiencing on the Red River, frogs will be a secondary choice as bait due to low numbers and very few dewy nights to allow them to move.

One great trick during the late summer on the Red River is to switch from fresh bait to frozen bait when the water temperature reaches 80 degrees or higher. This trend is due to the blood and scent washing from fresh bait faster while a frozen chunk takes a moment to thaw out leaving a better trail to the bait.

When fishing on the Red River during the late summer it is key to stay efficient. Don’t catch a few quick fish and commit your day to the “honey hole.” Rather keep a timer rolling and if you don’t catch a fish in 15-20 minutes move on to a spot that is similar to the pattern that you are fishing. This can be a key to catching lots of fishing during a day on the water. In other words, efficiency can make a good day a great day.

The Red River is known for its flooding. One big rain on the upstream side and there can be rapid rise and flood within a couple of days. This ability to move up or down quickly leaves anglers sometimes lost to find areas holding fish.

Don’t get hung up on fishing one way. If the water is rising fast and running high, be willing to move off the current. Likewise, if the river is low look for visible current on outside bends to search out aggressive catfish.

The reason I say this is because the catfish are constantly moving depending on conditions. The slightest change in conditions can make them go on or off current for comfort and easy feeding.

The Mighty Red River of the North is a catfish mecca that legends are made of. People have read about it for decades and willingly travel from all across the country for a shot at a monster channel cat. While it may not always fish perfectly it truly is the river that catfish dreams are made of.

Captain Brad Durick is a nationally recognized catfish guide on the Red River of the North, seminar speaker, and author of the books Cracking the Channel Catfish Code and Advanced Catfishing Made Easy. For more information go to www.redrivercatfish.com.