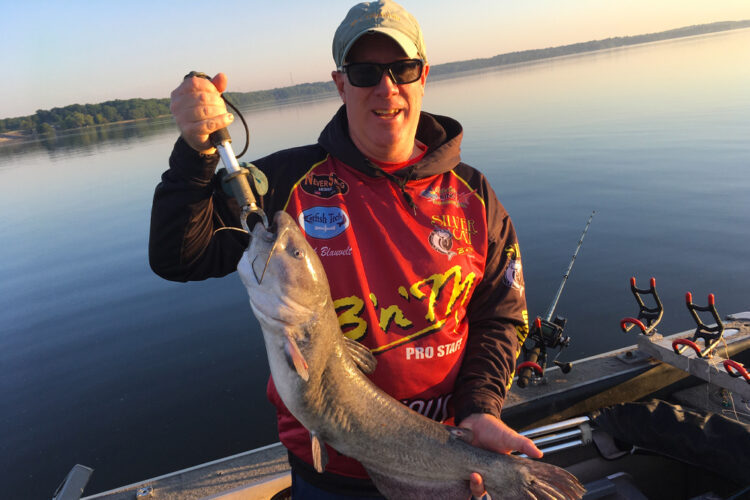 Sandusky Bay – The Secret is Out for Monster Channel Cats

by Ron Presley with Mark Blauvelt

Gear up on the heavy side and try your luck for some Sandusky Bay channel cats.

Historically, several destinations come to mind when seeking trophy channel cats. The Red River of the North, The Yellowstone River, and Calamus Reservoir to name a few.

As the smaller of the “Big Three” catfish species found in the U.S., channel cats are the most abundant. Blue catfish grow largest, reaching weights well over 100 pounds. Flatheads grow large too, but not nearly as many large fish are caught.

“In the last 10 years there is a new entry in the Monster Channel Cat race,” suggested Mark Blauvelt, an avid channel cat angler and B’n’M Poles prostaff member. “That new entry is Sandusky Bay on the SW corner of Lake Erie. The ‘Bay’ as it’s called by the locals is a large shallow muddy bottomed bay. It occupies about 64 square miles of water and harbors some of the nation’s best channel cat fishing!”

The Bay has long been known for its walleye and early spring white bass run but it is also among the best spawning grounds for channel cats in the Western Basin of Lake Erie in water depths that average about 25 to 30 feet.

“A quick look at a map of Sandusky Bay and you will see that there are several pinch points to consider,” explained Blauvelt. “There is the Route 2 Bridge, the Old Route 2 Bridge, and a railroad bridge that are all loaded with large chunks of Rip-Rap which is the key to attracting the cavernous spawning channels.”

The tens of thousands of nooks and crannies in the Bay attract spawning channels looking for nesting sites. Usually beginning in late March the males come in first and prepare the nests. Once the water temperature rises to near 70 degrees the females arrive to lay the eggs.

“This is when the biggest fish of the year can be found,” advised Blauvelt. “Many fish in the 20- to 25-pound range are being caught!  Not all of the fish are spawning at the same time so the quality fishing lasts from April 1st through Labor Day.”

Blauvelt noted that the May-June time frame is a great time to catch fish from the bank while the fish are right on the rocks. After the females drop the eggs and start heading back out to the lake, the males will stay and protect the eggs and the fry. This means that during the July/August timeframe there will be plenty of nice fish to be caught from shore. Many will be males with big heads and skinny bodies as they start to feed back up after finishing their spawning rituals.

For the angler choosing to drag baits any of the standard rigs will work. There is plenty of water to cover. The majority of the bay is less than 20 feet deep and mostly mud bottom. It has the usual amount of snags. Many are rock piles and rocky ledges and there is the occasional woodpile so expect a few hang-ups.

The most common technique for channel cat fishing on the Bay is anchor fishing. Anchor rigs are typical Santee Rigs including a float. Usually a 2- 4-ounce sinker will do the trick, depending on the current. Since many of the fish are bigger, 7/0- to 9/0-hooks are recommended depending on the bait size.

“Sometimes the water is coming into the bay and other times it is going out,” explained Blauvelt. “This is because of the winds that move the water in and out. A good tip is to fish it like a tidal river. The fish will move to current breaks in the heavy flows. Those winds can also be dangerous, especially when they are coming from the North or North East, so if you are in a boat be careful.”

The rule of thumb on Sandusky Bay is to gear up on the heavy side and take plenty of bait. The possibilities for a banner day are excellent.

“I recommend a medium/heavy rod with a quality reel,” said Blauvelt. “Spooled it with 20- to 30-pound test line. I use a B’n’M 7.5-foot Medium Heavy Silver Cat Elite casting rod. I add an Abu Garcia 6500 reel with Vicious 20-pound mono mainline. The channel cats and the freshwater drum can get large and you need to be prepared. Since the potential is up to 25 pounds I would much rather be a little heavy as opposed to light when it comes to bringing in the fish.”

Bait choice can be interesting since it is possible to catch 50-75 fish a day. Don’t learn this lesson the hard way. Bring a lot of bait when fishing the Bay.

“Early in the spring fresh shad can be found in the Bay,” offered Blauvelt. “But later in the summer, it’s best to bring lots of cut bait. I like shad, cut carp, sheep head, or the ever-popular shrimp which is a local favorite. Nightcrawlers, minnows, and stinkbait will put fish on the bank or in the boat as well. Some days shad is best, other days it’s shrimp. The best plan is to have a little of everything and a lot of it, just in case.”

Ohio rules allow the use of only 3 rods per person.  And Ohio is very strict about the trophy size limits that are heavily enforced. Each angler is allowed to keep only 1 channel cat over 28 inches.

“As a reminder, these fish are in the Bay to spawn,” added Blauvelt. “And the larger fish may be over 10 years old and worthy of protection for future generations.”

“The law allows you to keep fish under 28 inches,” concluded Blauvelt. “But keep in mind that most of the Bay anglers are Catch-Photo-Release (CPR) anglers and are very active about protecting the fishery for future generations. They ask you to do so too!”