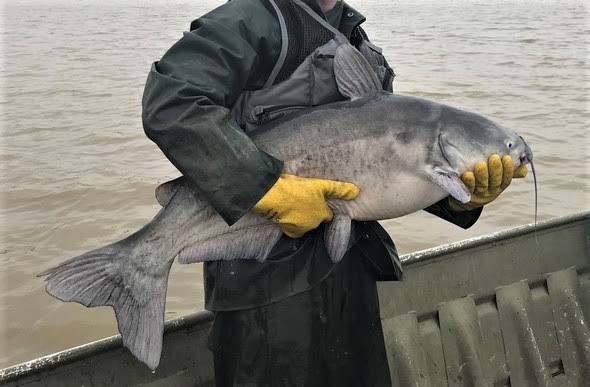 MDC staff assessed blue catfish and flathead catfish populations in Mark Twain Lake from 2012 through 2018. Findings indicate that a minimum length limit could improve catfish numbers in Mark Twain by increasing the abundance of preferred sized catfish (30-inch) and memorable sized catfish (35-inch) with minimal or no reductions in the yield, or pounds harvested by anglers.

MDC gathered public input online and through a mail survey to anglers returning tags from blue catfish caught in Mark Twain Lake. About two-thirds of the surveyed anglers support a minimum length limit for blue and flathead catfish at Mark Twain Lake. In addition, about half of the anglers who responded to the surveys valued the opportunity to catch a large catfish more than keeping catfish to eat. MDC biologists say that this regulation balances angler desires to keep catfish to eat and to have a better opportunity to catch a large fish.

The next step in the rulemaking process is for MDC to have a public comment period during October. MDC invites public comments during October online at www.mdc.mo.gov/about-regulations/wildlife-code-missouri/proposed-regulation-changes.  Comments received will be considered and final proposals will go to the Commission for further action at its Dec. 10 meeting. If enacted, the changes will become effective Feb. 28, 2022.

Learn more about Missouri catfish and related regulations from MDC online at www.mdc.mo.gov/fishing/species/catfish.

Mark Twain Lake is managed by the U.S. Army Corps of Engineers. Learn more at https://www.mvs.usace.army.mil/Missions/Recreation/Mark-Twain-Lake/.