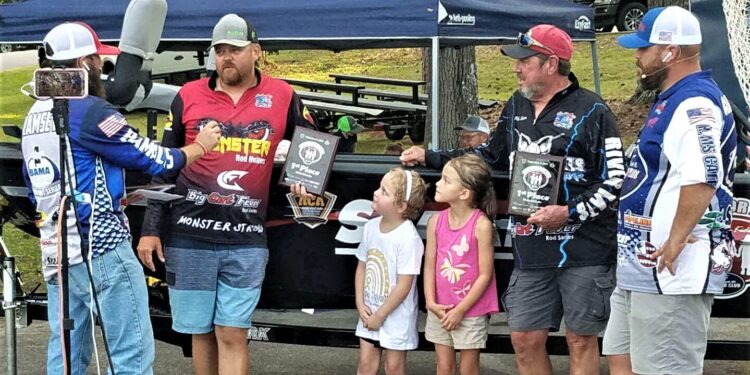 It was a simple slogan set forth by the organizers, “Fishing for Kids,” at the 2nd Annual Fishing For A Cure charity event. Promoted by tournament director Brad Andrews and the North MS Catfish Club, the tournament was held to raise funds for St. Jude Children’s Research Hospital.

The September 4, 2021 event took place out of the JP Coleman State Park in Iuka, Mississippi. Seventy-eight teams competed on Pickwick Lake on the Tennessee River for cash and prizes including the opportunity to win a SeaArk RiverCat 2060. The boat is custom wrapped and outfitted by several of the participating sponsors to make it a one-of-a-kind catfish boat. The names of all registered anglers went into the pot for an old fashion drawing to determine the winner of the boat following the awards ceremony. 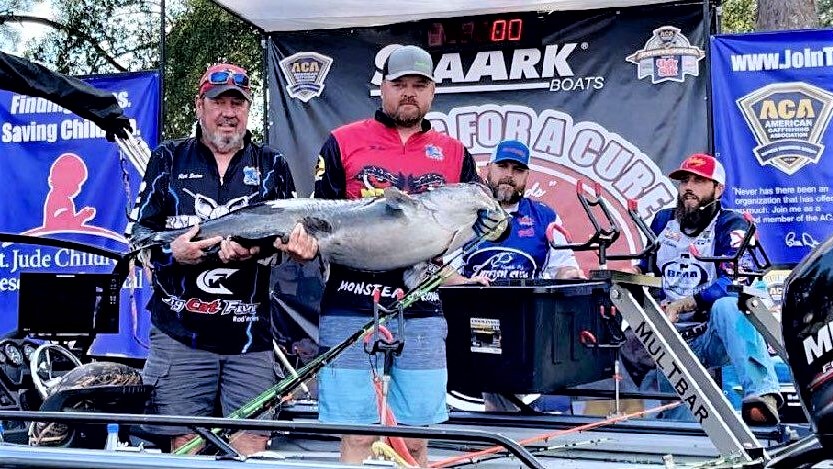 The top spot on Pickwick went to Mike Mitchell and Rick Sexton (Team Southern Cats). They teamed up to bring 150.30 pounds to the scales and earn first place. Their bag included Big Fish of the tournament at 66.70 pounds

“We fished upriver on Pickwick,” reported Mitchell. “We were targeting wood structure in 15-25 feet of water. We had good current where we were fishing. We used the trolling motor on Spot-Lock to hold us in place while we anchor fished.”

Mitchell and Sexton had all of their weigh-in fish in the first hour and a half of fishing. They also caught a 54 pounder in the early bite that they released.

“We weighed 2 fish in around 10:30,” said Mitchell. “With the hot water temperatures, we were concerned with fish health so we weighed two big fish early and then went back out. We fished the remainder of the event near JP Coleman State Park, but didn’t catch anything else.”

“We were using the new Hellcat Series XH rods,” continued Mitchell. “They worked out really well.  When we hooked into the two big fish we disengaged the Spot-Lock and drifted down current to fight the fish. That method increases your chances of landing big fish.”

“We would like to thank our family, friends, and sponsors for making all this possible,” concluded Mitchell. “We had a good day, that’s for sure! Anytime you can catch one over 50 and have to throw it back in a tournament you’ve had a stellar day.” 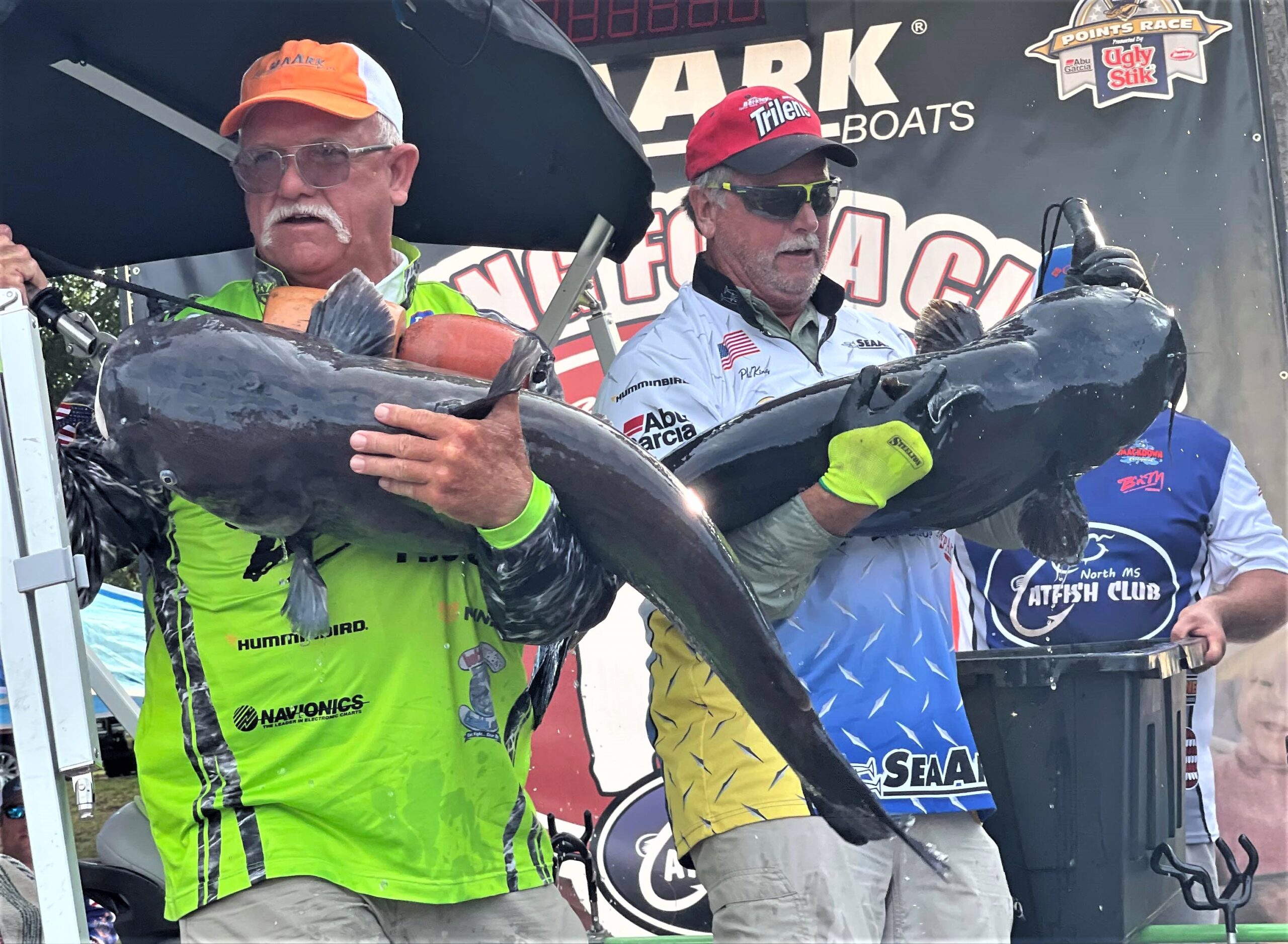 The runner-up spot went to David Shipman and Phil King. They teamed up for the charity event and put their years of experience to use. The result was a tournament day total weight of 106.95 pounds and a second-place finish.

“We went upriver and caught a 50 on the first drop,” said King. “We caught fish pretty much the rest of the day. We had one of the best days fishing we have had in a while.”

“Phil and I went up to catch bait on Thursday,” recalled Shipman. “We looked at the water flow and it was pretty fast. We checked a bank upriver with some rock and fast water just kind of messing around and we got a couple of bites and a 40-pound fish. We left that spot and went across the river in the same area and tried the same thing. We got 2 fish really fast. There was no structure anywhere, just hard bottom and fast water.”

The team tried 3 or 4 more similar locations and caught fish on every spot. They reported seeing skipjack jumping at all of the spots suggesting there were minnows in the area for them to eat. The deepest water they fished was 15 feet. They found bait, they found fish, and they had their plan for Saturday.

“Saturday morning was good bites to start,” stated Shipman. “Later in the day they cut the current down and it really slowed the bite down too. Phil and I have never fished Pickwick like this before. We were bumping like on the Mississippi River, just using smaller weights. I bet we caught 25 fish doing that. The places that had a lot of current is where we tried to stay. It looked like it was way too fast, but you could bump it. Of course, skipjack was what they wanted. We bumped all day.”

Shipman thanked his sponsors B&M poles, Barnes Marine, SeaArk Boats, and Driftmaster Rod Holders. And he sent a special thank you to SeaArk Boats and the North Mississippi Catfish Club for presenting the event for St Jude!

“It was a great tournament,” concluded Shipman. “We plan on attending every one of them.” 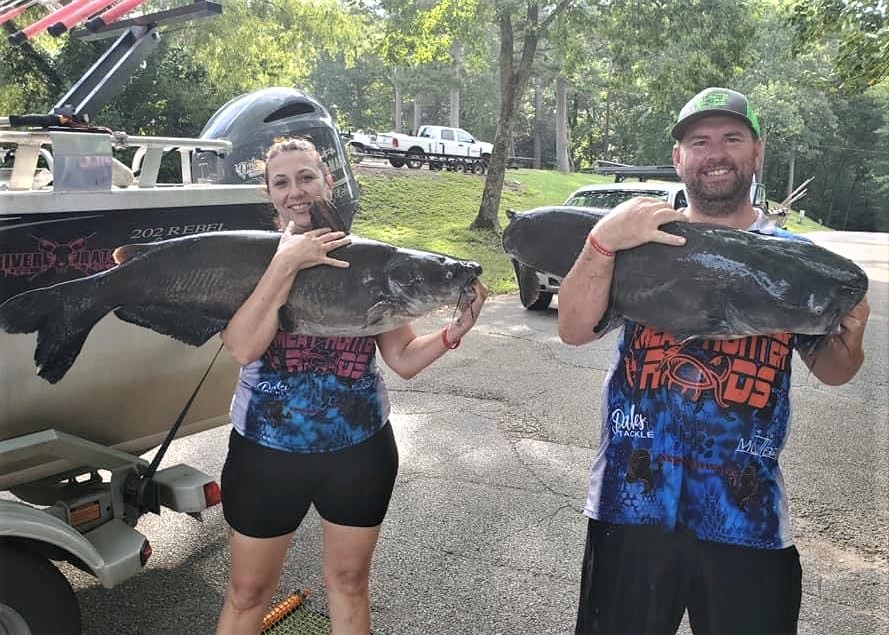 Third place went to Matt Russell and Samantha Caudill. They had a total weight of 99.50 pounds to earn the third spot.

Russell and Caudill traveled about 40 miles upriver where they fished all day. They were targeting fish in about 10 feet of water. The team reported a slow bite during the first couple of hours but it took off after that.

“We anchor fished with some heartbreak moments,” reported Russell. “We had one break off in the rod holder and we lost another one when some brush got us. We ran out of bait about 2:00. It was a fun day on Pickwick.” 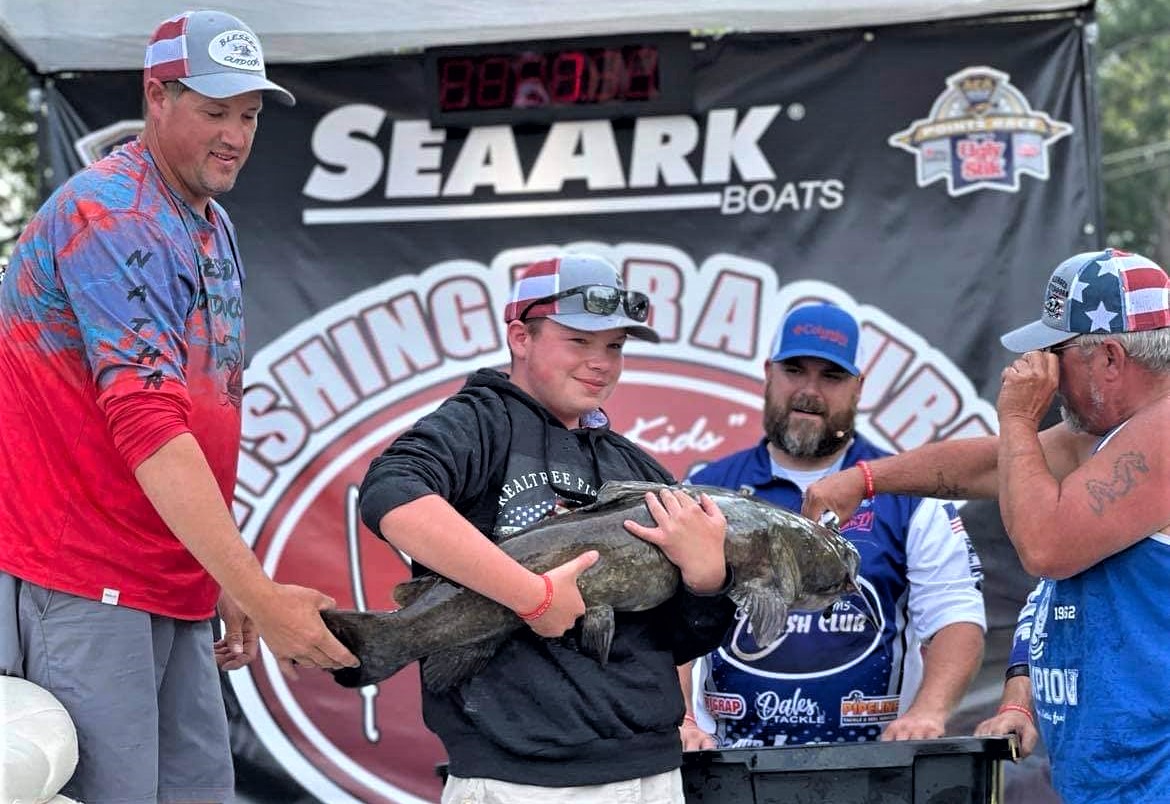 A 33.50-pound flathead helped Ethan Slaughter earn the Youth Big Fish award. He was fishing with Nathan Trammell and the Blessed Outdoors team when he caught the fish that earn him the $1000 cash award.

“It was pretty good this morning,” reported Slaughter. “A couple of minutes after it started I threw out and there she was, a nice flathead. I got to reel it in and it was awesome.”

“I want to thank Blessed Outdoors (Nathan Trammell), Dale’s Tackle, SmackDown Catfishing, and Holy Beardz. Most of all I want to thank our Heavenly Father above for having us all here today,” concluded Slaughter. 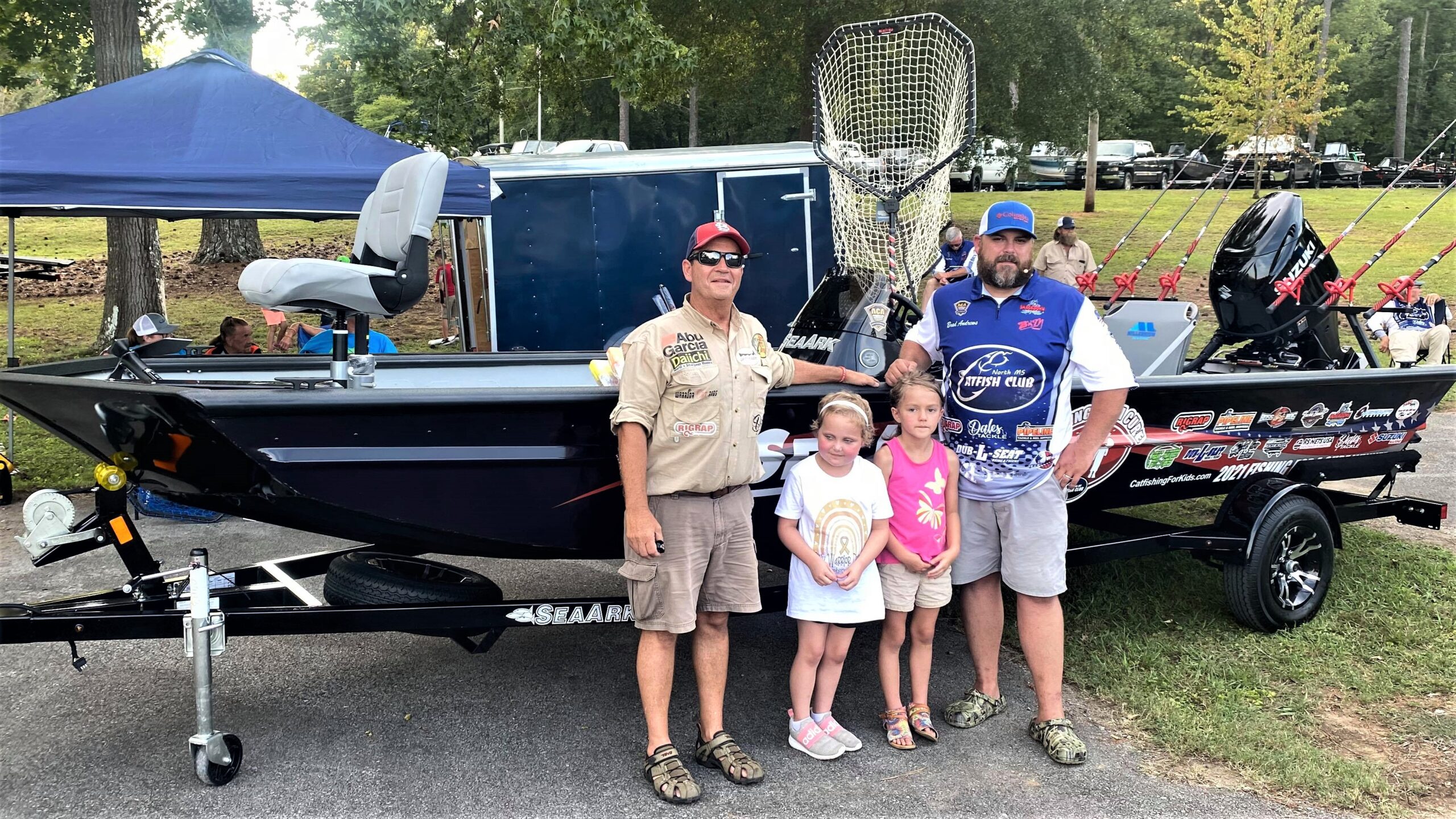 The 78 boats represented more than 200 anglers who had their name in the pot to win the rigged out SeaArk 2060 RiverCat boat. The crank was turned on the raffle drum to mix the tickets and a young lady drew out the name of Dino Meador. Meador is the regular fishing partner with Larry Muse and their dad, Frank Meador, and on this day it included Larry’s grandson Frankie.

“I was fishing with my family today. We had a pretty good day and it improved quite a bit the last couple of minutes,” joked Dino.

Meador went on to explain that the family company buys through Amazon where they use the Amazon Smile program to donate to St. Jude.

“I petted a dog named Uno right before they drew,” said Dino. “I’m pretty sure that’s what did it. It was great. Especially since it was a St. Jude tournament. They’re my #1 charity!” 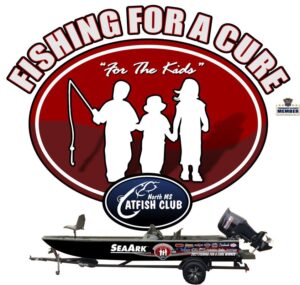 “The 2nd Annual Fishing For A Cure is in the books,” said Tournament Director Andrews. “What a huge success it was. Anglers and families traveled from all over the country to partake in this event. Seventy-eight boats with well over 200 anglers came to fish the tournament. Sponsors, anglers, and others came together to help raise money for a great cause.”

“This is what Fishing For A Cure is all about,” continued Andrews. “Coming together in a laid-back family-oriented tournament, having fun, while supporting the kids of St. Jude. A lot of these anglers were able to bring out their kids for their first tournament experience, and boy did they enjoy it.”

“I cannot thank the companies enough that came forth to make this possible. SeaArk being one major partner in this event generously donated the River Cat 2060 that was given away. They do so much for the catfish community. Charles Crook with Meat Hunter Rods worked with SeaArk and various other companies to put an awesome custom wrap on the boat along with loading the boat out with tons of product.” 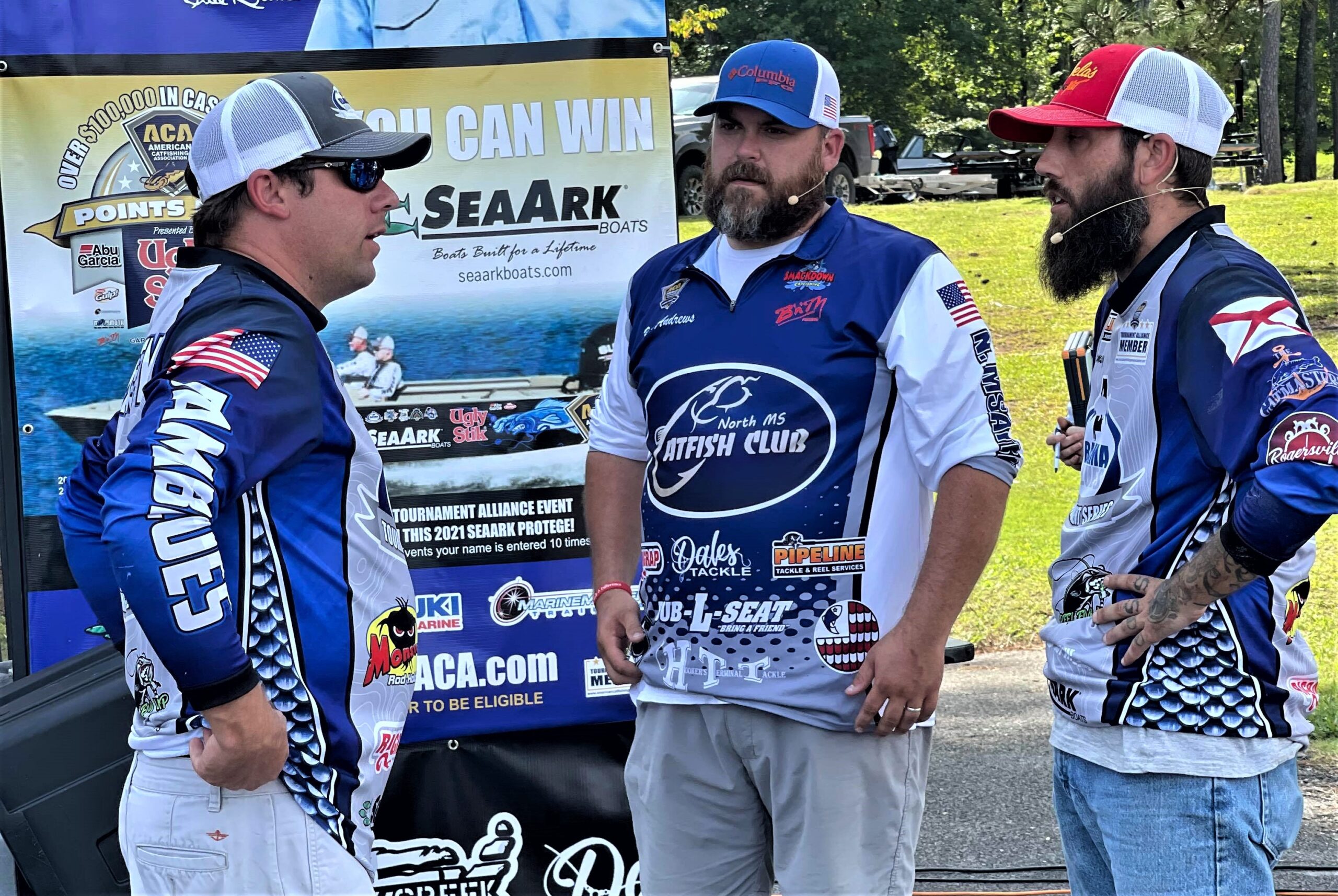 “Also a huge shoutout to Chris and Cory Ramsey for lending their hand in making this happen,” noted Andrews. “These guys are awesome and did an outstanding job managing the weigh-in stage. And thanks to the SeaArk crew for all the footwork at the boat ramp where they keep everything running smoothly.”

“It was an epic day,” concluded Andrews. “We raised a ton of money for St. Jude. It is very heartwarming to see the catfish community come together for such a great cause. I can only hope the good Lord blesses us to continue to grow this amazing event for many more years to come.”

About St Jude
The mission of St. Jude Children’s Research Hospital is to advance cures, and means of prevention, for pediatric catastrophic diseases through research and treatment. Consistent with the vision of our founder Danny Thomas, no child is denied treatment based on race, religion, or a family’s ability to pay.