King Kat at Pekin, IL — How They Fished 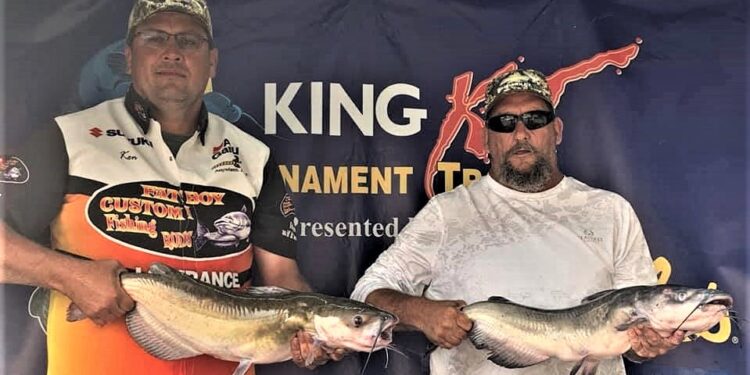 Catfish anglers from several states traveled to the  Illinois River at Pekin, IL for a King Kat Tournament Trail event presented by Bass Pro Shops Cabela’s. Eleven teams gathered to test their catfishing skills against other anglers and Mother Nature.

Anglers fishing the September 11, 2021, Region 3 event were vying for $ 3,720 in cash and prizes, an opportunity to qualify for regional competition, and the opportunity to qualify for this year’s King Kat Classic Championship on the Red River at Natchitoches, LA, November 5-6, 2021. The Classic features a guaranteed payout of $125,000 in cash and prizes.

Anglers had a day characterized by windy weather on the Illinois River. The weatherman reported winds gusting to more than 20 miles per hour, making fishing conditions tough. Morning air temperatures in the mid-sixties rose to near 90 degrees in the afternoon. The water temps in the river were in the mid to upper 70s. 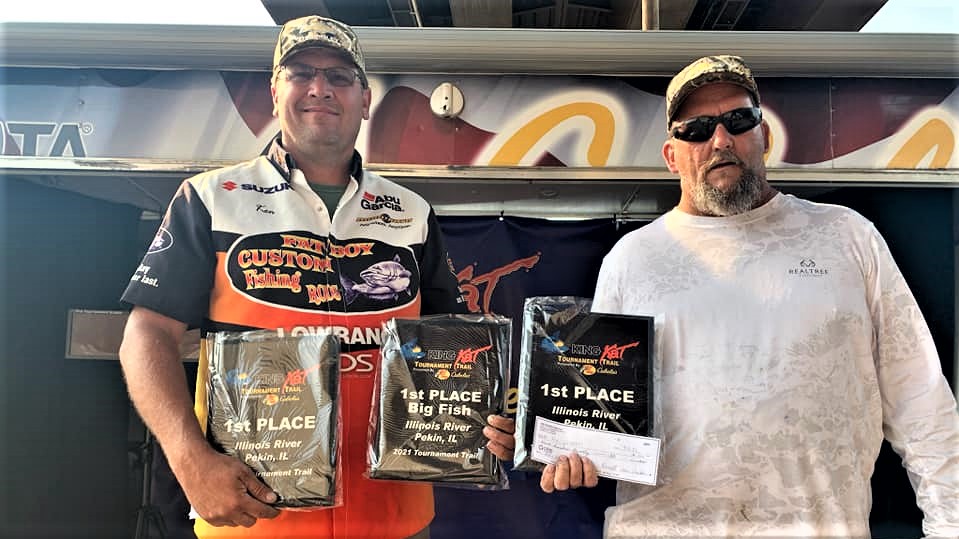 Teaming up to take the top spot was Ken Luttrell from LaPlace, IL, and Bryan Espy from Maroa, IL. They brought a total weight of 43.98 pounds to the scales to earn the first-place check of $1,800. Their bag included the Big Kat of the tournament at 10.96 pounds for an additional $220.

“We were dragging In 15- to 19-foot water,” reported Ken Luttrell. “We had a 15 to 20 mile an hour wind straight out of the south. Instead of fighting it, we let the wind do some of the work and push us upriver.”

Luttrell and Espy used the trolling motor to pull the boat towards the bank and when they pulled back out to the center of the river the wind would catch the rear of the boat and push it up on the ledge.

“That’s when we got our bites,” explained Luttrell. “We were fishing 60 miles downriver. We quit about 2 o’clock to make it back up the river for the weigh-in.”

The team used mooneye and shad for bait. They reported catching about 20 fish for the day and all were good fish.

“We’re so thankful to win this one,” concluded a grateful Luttrell. “We have had three Cabela’s tournaments in Pekin and my partner and I have been fortunate enough to win all three.” 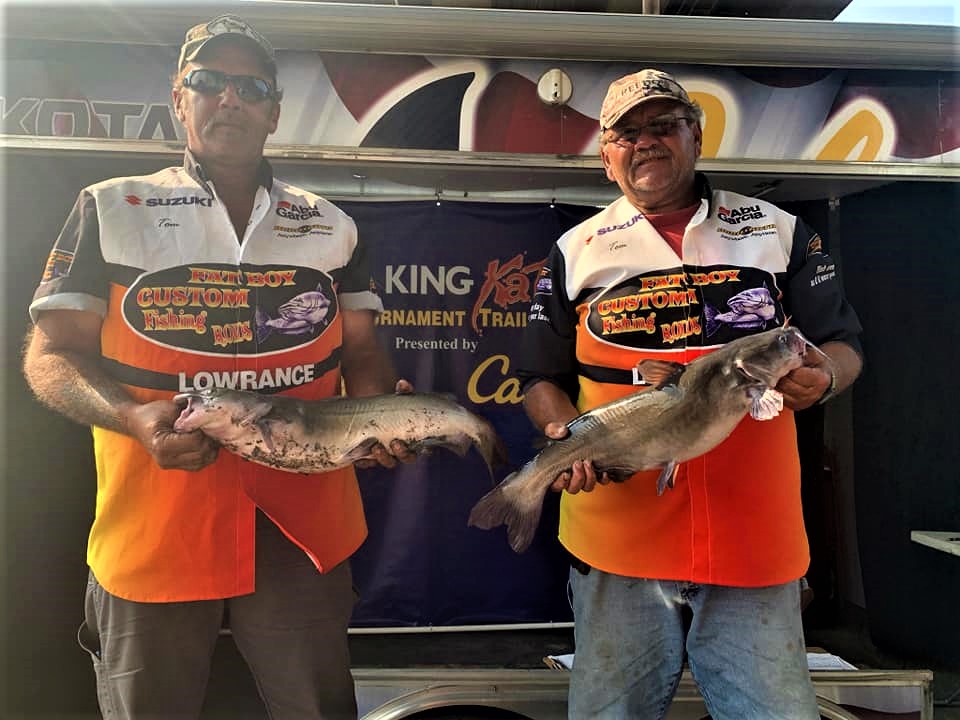 The runner-up spot went to Thomas (Tom) and Jefferey Luttrell from Ramsey, IL. They put together a bag weighing 34.63 pounds to earn the second-place spot and earn a check for $1,000.

“We caught our fish about 35 miles north of Peoria, IL,” reported Tom.  “We were dragging baits in water that ranged from 10 to 20 feet deep.”

After making the run north towards Peoria, Team Luttrell found fish isolated in certain areas. They used shad and mooneye to target the fish by keeping the bait in those certain areas. 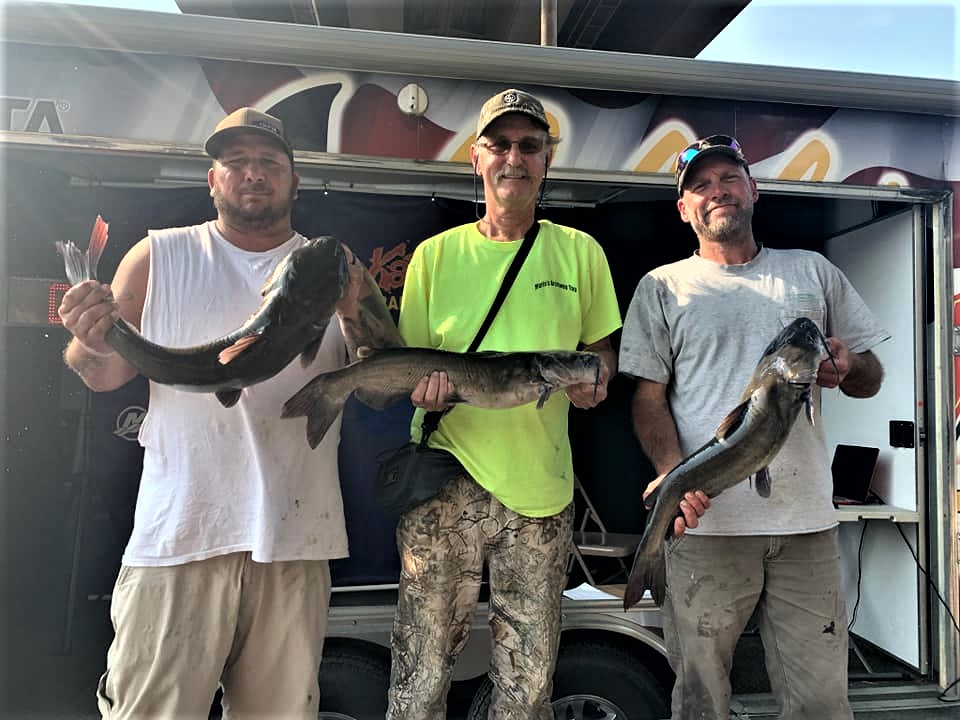 Mike Flaherty, Pete Moreland, and Dan Dippel traveled from Ladd, IL to compete in Pekin. They brought a total weight of 32.22 pounds to the scales to earn the third-place check for $700.

Flaherty and Moreland fished North of Pekin in the Peoria Pool. Like other anglers, they indicated that the wind was a problem. They complimented the anchor with the trolling motor to make it fishable. They found fish from very shallow water to deeper.

“It was windy with no current,” detailed Flaherty. “We threw the anchor out the back and used Spot-Lock on the trolling motor to keep the wind in our faces all day without the current. We caught a lot of fish, just couldn’t get the bigger ones to bite.”

The team used shad and creek chubs for bait. They caught 40 to 50 fish on the day in water ranging from 1 foot deep to 20 feet deep.

Epilogue
Tournament director, Willy Pranker thanked all the anglers for fishing the event and sent a special thank you to Ray Dennison Chevrolet for their support of the tournament.

The 2021 Championship
This year’s King Kat Classic Championship will be held on the Red River at Natchitoches, LA, November 5-6, 2021. The Classic features a guaranteed payout of $125,000 in cash and prizes. The points race is set to pay $30,000 to the top 20 places based on the competitor’s top-five finishes.