Catching Fall Catfish on the Move 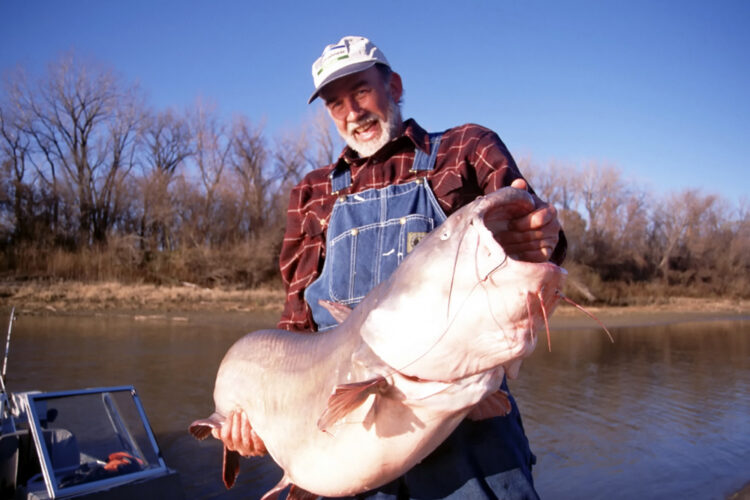 When fishing rivers, it’s important for catfish anglers to understand movement patterns of the fish they seek. Big blue cats like this Missouri River fish may migrate hundreds of miles as seasons change, making them difficult to pinpoint. (Keith Sutton photo)

Catching Fall Catfish on the Move

Studying the migration habits of catfish can make your catch rate soar.

My friend Sid Riley was a river rat. His wife lived in their home in southeast Arkansas, but Sid spent most of his time at a cabin near the Mississippi River.

Like many river rats, Sid enjoyed catfishing. And the Mississippi—a mother lode of giant blues, flatheads, and channel cats—provided many delicious whiskerfish for the savvy fisherman’s dinners.

The thing was, until he was in his early 80s, Sid never fished for catfish using a rod and reel. He fished with trotlines, limb-lines, jugs, and nets. And using these methods, he caught thousands of catfish. But it never occurred to him that catching catfish on rod and reel could be much more fun than catching them using other methods.

That all changed when my friend Jim Spencer bought Sid one of my catfishing books.

“You need to read this,” Jim told Sid, “and then try some of Sutton’s methods for catching cats on a pole and line. You’ll like it, and you’ll get hooked. Mark my words.”

And so, Sid did just that. And sure enough, as Jim predicted, the river rat loved rod-and-reel catfishing. He liked it so much, in fact, that was his year-round hobby. He started taking his wife along, and she got hooked on catfishing, too. On many occasions, they called to tell me about the giant cats they caught, and those fish—some 50 to 70 pounds—would have made any catfish angler green with envy.

I got many guess-what-we-caught calls from Sid, but more often he had a question that needed answering. At first, these were basic questions like “How do you prepare cut-bait?” or “What hooks do you like for this situation?” Later, though, Sid started asking questions one only hears from anglers who have spent hundreds of hours on the water, anglers who are serious about their fishing and want to learn more. One such question still sticks in my head years after Sid first asked it because it’s one I still hear a lot.

“Why have the catfish suddenly quit biting?”

It was autumn. Sid and his wife had been catching dozens of cats daily for weeks. “But today, it was like you’d turned off a tap,” he said. “I tried every bait and locale, but I couldn’t buy a bite. It was like the catfish disappeared.”

Which is exactly what happened.

“River catfish are like ducks,” I explained to Sid. “They can’t fly, but just like waterfowl, many catfish—blues and channel cats, in particular—migrate with the seasons. In fall, schools of cats move downstream to wintering areas, just as flocks of ducks fly south to their wintering grounds. When spring rolls around, catfish return to upstream areas to spawn, much like ducks flying north to breeding grounds.”

The seasonal migrations of catfish don’t cover thousands of miles, as is the case with our feathered friends, but their movements are significant enough—from a few miles to several hundred miles—to be worthy of every river catfish angler’s attention. Duck hunters must know where the birds are gathered to be successful, and so, too, must catfish anglers.

I shared with Sid the results of a study conducted in Nebraska’s Platte River, a tributary of the Missouri, which exemplifies movement patterns in many small to mid-sized rivers. Thirty-eight adult channel cats implanted with radio transmitters were tracked. Their movements showed distinct seasonal trends.

The researchers said these movement patterns suggest overwintering of channel catfish in deep scour pools in the Missouri River, followed by upstream spring movements to spawning and feeding areas, and a return downstream in autumn and winter to avoid ice cover in shallow streams. The movements correspond with changing temperature and/or discharge patterns in the river. It is likely the same patterns of movement exist in the Mississippi River as well.

We can’t say channel cats always behave the same in other waters, but the movements described are similar to those observed in many other small to mid-sized rivers.

Blue catfish are even more mobile than channel cats, with migrations often spanning several hundred miles. Once again, however, movements follow general seasonal patterns—upstream in spring and downstream in fall, with more local movements during other seasons. In the Mississippi River, for example, blue cats migrate downstream to wintering areas where water is warmest. By early summer, they have returned to upstream reaches.

Numerous studies involving river flatheads show these fish are very sedentary. They establish preferred use areas and seldom move far from those sites, regardless of the season. For example, adult flatheads monitored from June through January in Mississippi’s Big Black and Tallahatchie rivers moved less than one-half mile on average from their capture site during the entire six-month period.

Sid learned that applying knowledge of these movements helped him determine where catfish would be throughout the seasons, thus increasing the chance of catching fish. He usually fished for big blue cats, but when the blues temporarily disappeared during migration, he could still find and catch flatheads, which were more local in their movements. To find blues and channel cats in fall and winter, he had to focus his fishing efforts near deep wintering holes where they gathered for the season.

When you experience the same thing—a bite that slows or ends entirely as seasons are changing—learn to adjust your tactics as necessary to pinpoint active fish. You’ll be glad you did.