Livewell Lessons from The Catmasters 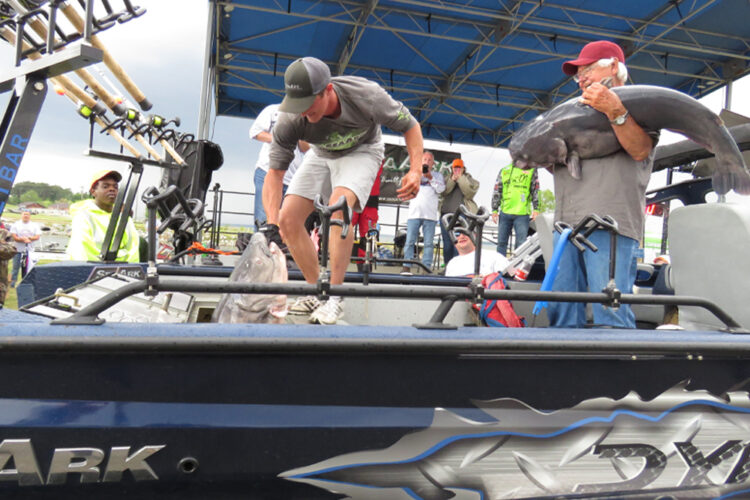 Zachary (Zac) Taylor is shown here pulling a near 90-pound blue out of the huge SeaArk livewell as his partner Floyd “Ken” Kennamer waits patiently. With multiple trophy fish in a single boat, large efficient livewells are a necessity. (Ron Presley Photo)

Full disclosure here – I am a catfishing guide but I am NOT a catfish tournament angler. I discovered long ago that my psyche is not cut out for competitive fishing.

But thank goodness there are many who are.

“In our part of the world, Texas, I’ve seen it grow,” said Bryan St. Ama. “Tournament fishing has turned on a lot of anglers to catfishing.”

St. Ama is the Owner/President of the popular Catmasters Tournament Circuit. He is also a Charter Member on the Advisory Council of the American Catfishing Association – an organization dedicated to improving the catfishing community through conservation, education, innovation, and sportsmanship.

“I trophy bass fished most of my life, looking for 15-pound-class bass. I kind of got bored with that and went on a catfish trip,” he said. “I saw the guide on social media and took my boys with me the third weekend in February. I remember it very well even though it was several years ago.”

“The first fish in the boat weighed 62 pounds and came out of two-and-a-half feet of water. This was on a lake I grew up on and never knew they were there,” he said. “The next fish weighed 50-something pounds. The next one was 40-something and it went on all day long.

“I owned two fishing boats at the time and I stopped at a Bass Pro shop on the way home and bought a $2,400 side-imaging unit, ordered some more stuff and I was trophy catfishing within seven days. I’ve never stopped and had fun ever since.”

The addiction to chasing trophy cats led St. Ama to create the Catmasters Tournament series, now offering seven tournaments a year across the country with First Place purses up to $30,000.

“A lot of people these days still don’t realize how big catfishing is and how big these fish can get. It shocks them,” he said.

With a passion to encourage tournament catfishing, St. Ama is equally passionate about conserving catfish.

Catmasters tournaments have strict rules regarding adequate livewells. He has created a number of procedures that have advanced livewell care and increased awareness about the importance of proper fish handling and care.

The truth is, even if I had the desire to fish a Catmasters tournament, my boat would not meet their minimum requirement for an adequate livewell – something tournament directors inspect prior to every event. They require a minimum 50-gallon livewell (or two 40-gallon livewells). Some summer tournaments also require livewells to have a pure oxygen injection system.

St. Ama says, however, I could probably get ready with a reasonably small investment.

“You can put in an adequate system, including oxygen. for $500,” he said. “Lots of people start out by just buying a big toolbox like you would put in the bed of a pickup truck.”

Catmasters clearly cares about keeping all catfish – even those 50- and 60-pound monsters – alive to be safely cared for and released. St. Ama says catfish tournaments have helped get that message across.

“In the early days we saw anglers in our tournaments with 16 or even 12-foot jon boats trying to keep fish alive with tow sacks hanging off the side of the boat. Those same guys five years later have bought $50,000 G3 2400’s and are traveling around to fish tournaments.”

That illustrates that sometimes, the cost of a livewell isn’t the expensive factor of fish care. In many cases, it is the boat. St. Ama, for instance, has a 150-gallon livewell. Filled with water it weighs roughly 1,200 pounds. That’s why he fishes out of a huge SeaArk.

The amount of water isn’t the only factor. And in many cases, a simple water circulation system is not enough. According to the CatMasters Facebook Page, recirculating existing water has no effect in adding additional oxygen to livewells. At best it can maintain oxygen levels that already exist. But in some cases, if you’re introducing warm lake surface water, it can actually decrease oxygen levels.

Multiple studies show that catfish mortality happens at a much higher percentage up to three days after the fish are released. They say pure oxygen injection systems are a better way to decrease mortality from oxygen deprivation. Pure dissolved oxygen is the single most important factor to keeping fish alive, not only at weigh-in but during those crucial days after release.

Catmasters even has fine-tuned suggestions for oxygen diffusers (airstones). Their research indicates you should use 100-500 micron diffusers. Diffuser bubbles should actually be hard to see. Of course, adding ice and lowering water temperatures helps a great deal as cooler water can hold higher oxygen levels.

Finally, adding salt to livewells is another benefit. They say you should generally add two-pounds of salt to a 50-gallon livewell.

Providing ultimate care for trophy catfish is an art and a science. But St. Ama believes it is the future of the sport.

“I like how tournaments have changed some of these angler’s minds about conservation,” he said.

“Oh no, we haven’t peaked out,” he exclaimed. “I’ve introduced new people to it just recently. In fact, one friend of mine is out shopping for a catfishing boat this weekend. I think it’s getting bigger every day.”

Get more information on conserving catfish at American Catfishing Association.