The Alabama River at Wetumpka 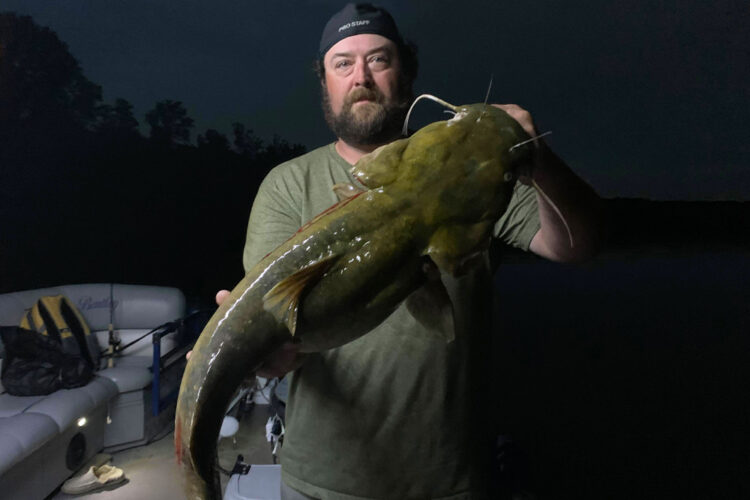 Sometimes fishing success can come in your own backyard.

The Alabama River is formed when the Coosa River and the Tallapoosa River merge in Elmore County, AL. It winds its way towards Montgomery, AL to the southwest and joins the Cahaba River near Selma, and finally empties into Mobile Bay. The highly meandering river offers 318.5 miles of catfish habitat.

Marshall Hughey is an avid catfish angler and resident of Elmore, County. His passion for catfish has led him to originate and direct the Alabama Catfish Series tournament trail. Hughey’s residence in Elmore County, near the junction of the Coosa and the Tallapoosa Rivers, provides him with easy access to fish the Alabama River.

“I spent the first 20 years of my life around Marion, Alabama,” said the 40-year-old angler. “I fished a small river in that area known as the Cahaba. Somewhere around 14 years old, I started fishing the Alabama River area where the Cahaba ends and merges into the Alabama River. Now, I live just a few miles from the boat ramp in Wetumpka.”

“There are two ramps in Wetumpka,” confirmed Hughey. “After launching in the Coosa you can run downriver a few miles where the Coosa and the Tallapoosa merge and the Alabama River officially begins.”

Hughey has caught plenty of fish between Wetumpka and Montgomery, including blues, channels, and flatheads. The river varies in width from 50 to 200 yards in that stretch of river with water 40 feet deep and more.

“In Wetumpka, you will find and see rocks and rapids just upriver (north) from the boat ramp,” offered Hughey. “As you head south it quickly transitions to sand and gravel with occasional boulders which you can find on your fishfinder.”

The confluence of the Coosa and Tallapoosa can best be described as a small delta. There are several different shallow paths around a couple of islands. It is mostly jet boat traffic around the islands with a main channel where boats can navigate through. Continuing south the two rivers finally merge completely to become the Alabama River. The river widens and the banks get steeper as it flows towards Montgomery.

“It’s mostly hardwood timber lining the banks in this area of the river,” continued Hughey. “For the next few miles, the river is bounded by farmland and an occasional house. As you get closer to Montgomery, houses become more frequent, and more indications of commercial use of the river are present.”

That evidence of past commercial use can be good fishing. You will see old abandoned barge pilings and old loading systems that still line the river in some places. Those leftover commercial fragments and plenty of normal river structures provide some good catfish habitat.

“Look for laydowns or submerged structure,” advised Hughey. “Even the area around Wetumpka has humps and boulders where fish will hold behind them when they are running water.”

Hughey likes to anchor up and tightline potential areas using 7-foot 6-inch B’n’M Silver Cat Magnum casting rods equipped with Penn Squall reels. When there’s good current he likes to bump bottom while drifting or under power of the trolling motor when needed.

His rig consists of a sinker slide, for easily changing weights, on a 40-60 pound mainline, held in place by a barrel swivel. He adds an 80- to 100-pound leader and a hook to match the bait.

“During the hot months I use Madd Catter Reaper or XHD circle hooks from Hookers Terminal Tackle,” explained Hughey. “In the winter months, I prefer a J hook with big live bait.”

Hughey prefers live bait anytime. His boat is equipped with a special bait tank to keep his bait lively and fresh.

“I fish with live bait year-round,” said Hughey. “I catch bait with a cast net and keep it in my Xtreme Bait Tank. My favorite live bait is big gizzard shad and threadfin shad. Redhorse sucker creek chubs and shiners are also found in the area and can be caught with a cast net.”

He will use bream also but warns anglers that they must be caught by hook and line in Alabama to be legally used as bait. Cut skipjack is used too, but only when he can’t find fresh live bait.

“My penchant for flatheads is why I like live bait,” explained Hughey. “I do make an exception in muddy water. When the water is muddy I’ve found fresh cut bait to be more effective than live. In clear water conditions, live bait seems to produce more than cut bait.”

A switch to B’n’M Silver Cat Magnum Spinning Rods with Penn reels is made when shallow water fishing with big live bait in the winter months. The spinning gear allows him to make a softer presentation that keeps the bait lively longer.

Hughey has lived on the upper end of the Alabama River for the last 6 to 7 years and reports having caught fish in the 50-60 pound range. He readily admits to being a flathead fanatic and focuses on them regularly. They don’t tend to be as big as blues. However, the Alabama River currently holds the state record for flatheads at 80 pounds. It was caught downriver from Montgomery at Selma, Alabama.

“I’ve caught some decent fish in that range of river,” concluded Hughey. “I personally target the flathead, the apex predator of the water in my opinion. The approach to catching them is different and the challenge attracts me. They prefer live bait more than others and live bait is something I’d rather fish with. I’ve caught some in the Wetumpka to Montgomery area in the mid-40 pound range. Flatheads are my fish of choice.”

With a personal best of 67 pounds, Hughey would like nothing better than to catch the next Alabama state record in his own backyard, the Alabama River.