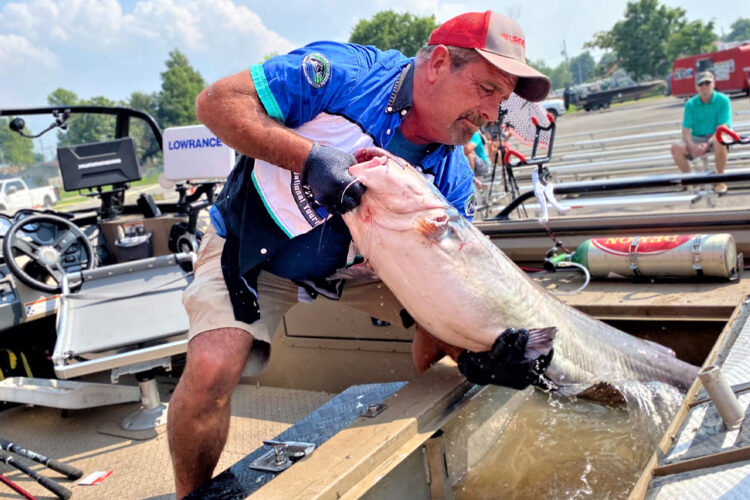 The oxygen bottle shown in the photo is evidence that Barry Wilson cares about fish health and catfish conservation. Oxygen works! (CatMasters Photo)

There is no more important place than catfish tournaments to be concerned with the health of trophy catfish. The CatMasters have been at the forefront of finding ways to improve the release of healthy fish following weigh-in.

The CatMasters were the first to introduce a livewell rule back in January of 2019. It required either one 50 gallons single tank or two 40 gallon tanks as a minimum and they had to be capable of recirculating the water. Additionally, pure oxygen systems have been encouraged since that time.

The trail has used nursery tanks since their inception if there was reason to believe they would be helpful. The availability of the nursery tanks allows sluggish fish to resuscitate before being returned to the water. More recently, CatMasters have gone to mandatory oxygen during summer events.

In addition to the rules and procedures mentioned above, The CatMasters are strong promoters of using oxygen in livewells. They believe oxygenated livewells will lead to a lower mortality rate for tournament fish.

As part of their continuing push for improved fish care, The CatMasters purchased and use a YSI Digital Dissolved Oxygen (D0) Meter to test oxygen levels in the competitor’s livewells at the weigh-in. In one sense it is an educational tool and in another, it actually identifies potential problems in the weigh-in line and creates an opportunity to add oxygen and help the fish even before they reach the scales.

The meter gives a reading in milligrams per liter of water (mg/l). A reading in the range of 6-7 mg/l corresponds to 80- to 100-percent saturation with 100 percent being ideal.

“Using the DO meter we can educate teams on the use of oxygen,” explained Bryan St Ama, Owner/President of the Catmasters Tournament Trail. “The meter allows us to show anglers the DO levels in their livewell during the weigh-in process. For those anglers that are not using pure oxygen, we can demonstrate the benefits. For those that are using oxygen already, we can show them how to tweak their systems to obtain the best results.”

“Low oxygen is the number one cause of fatalities in fish care,” continued St Ama. “Ninety-five percent of struggling fish at the Caruthersville weigh-in came from teams not using oxygen or not using oxygen systems properly. Supplying weigh-in line readings directly to the anglers is a great tool for educating them and promoting better fish care in the future.”

Trevor Nederhoff was involved with taking measurements at the Caruthersville event. He was testing oxygen levels and talking with the teams as they were in the weigh-in line. He reported that the majority of the teams were running oxygen on their boats, an observation he was pleased to see.

“Mainly it was for research on what everyone was using,” reported Nederhoff. “And to see what was effective and what wasn’t. At the same time, I was trying to educate the people who weren’t using pure oxygen and explaining to them why their current systems weren’t helping.”

As the anglers filed past in the weigh-in line, Nederhoff observed standard bubblers, oxygen boxes, and pure oxygen systems. Unfortunately, there were low DO levels associated with all the different types.

“The oxygen levels were all across the board,” Nederhoff said. “Obvious factors like different settings and different stones resulted in various readings. Even the pure oxygen systems had a variety of stones and some were not producing enough dissolved oxygen to create a healthy environment.”

“I highly encourage people to get a good stone,” advised Nederhoff. “And if possible, have a backup on hand in case you break the one in use. It can and eventually will probably happen because they are fragile.”

Nederhoff also pointed out the practical benefit of using an oxygen system to the competitors. The result of losing a big fish could be losing a tournament.

“I recommend taking advantage of the DO meter when you are at the tournament,” continued Nederhoff. “Especially in hot weather. A prime example was when the leading team stopped for a check on day two at Caruthersville. Their DO levels were at  potentially bad levels even though they were running oxygen.”

The issue was determined to be a low setting on the regulator. In five minutes at a higher level, the DO had doubled. In 20 minutes the levels returned to perfect. When they got to the scales their fish were healthy when they pulled them out of the live well.

“Our DO was great on day one,” confirmed Adam Long, a member of the winning team at Caruthersville. “But it was low on day two. It was around 3 mg/l or so. We dialed it up and got back in line. It was up to about 7 when we weighed. I think we are fishing for too much money nowadays not to use oxygen, it works! We have been using oxygen for a year and I would not fish a tournament without it.”

Larry Muse uses a system called Oxygen Edge.  Muse is known for the healthy fish he pulls out at the scales, sometimes getting beat up a little. LOL.

“My regulator includes pounds as a setting,” explained Muse. “It is based on 100 gallons of water. I dial in how many pounds of fish I think are in there. It will handle up to 200 pounds. The agents at Oxygen Edge say you can’t put too much oxygen on them in a day’s time. But you don’t want to waste it.”

This highlights one of the problems. All regulators are not the same and some anglers have not figured out the right settings to keep the fish healthy and conserve the oxygen so you don’t run out.

“Unfortunately, the DO meter is a tool that is very expensive for anglers to have on hand for themselves,” stated St. Ama. “We have $2,200 invested in our meter. We are working with Alex Nagy and other professionals to come up with a standard adjustable regulator that would allow anglers to dial in the weight of the fish and the temperature to achieve the best oxygen levels.”

“Anglers should use the tools available to gain the most knowledge possible when it comes to fish care,” concluded Nederhoff. “Bryan bought this tool to help everyone be better at what we love to do, which is compete and win and that’s not going to happen if you lose a fish!”

Epilogue:  The CatMasters are experimenting with using judges at their next championship event. The top 20 teams will qualify to fish on the final day of the Classic. They will be assigned judges to ride along to weigh and record fish as they are caught. Only one trophy fish will be brought to the scales. The total weight of all fish caught on Championship Saturday (NO LIMIT) determines the winners. Volunteer marshals will be coming from all over the country to participate in the event. Weights will not be shared publicly until teams appear on the stage at weigh-in.