Why We Catfish: A Guest Editorial by Stan Liberty 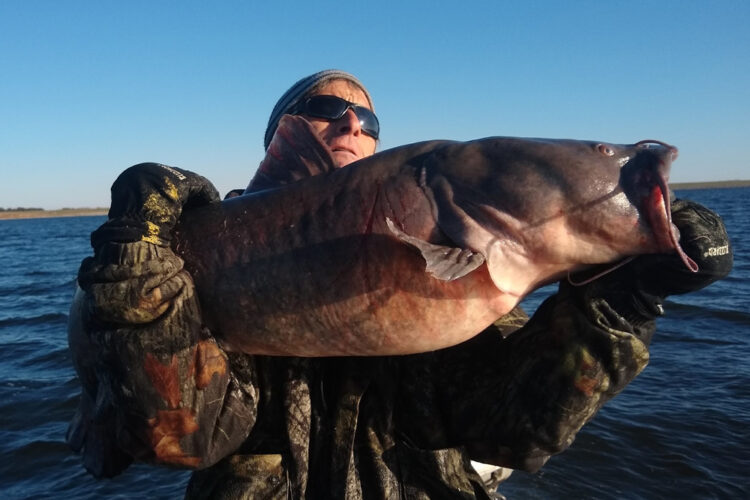 My Catfishing Has Become an Obsession

Catfishing has created a brotherhood for me.

My name is Stan Liberty, I am 56 years old. My hometown is Lincoln, Nebraska. Although I normally fish the waters of eastern and western Nebraska, and Kansas I have had several opportunities to catfish at Wheeler Lake in Alabama and Lake Texoma in Northern Texas.

I have been fishing since age 5. My dad started me bass fishing with a bait caster for largemouth bass in Virginia Beach, VA where I was born. About 5 or 6 years ago, I started bank fishing for small channel cats off the shore in Lincoln, Nebraska and surrounding areas. That was my introduction to catfishing.

Then one weekend a friend of mine called, and said, “You have got to check out this place in Kansas. It’s called ‘The Tubes.’ It is a massive outlet for water on the backside of the dam at Tuttle Creek Lake in Kansas. They are catching big catfish down there.”

I began to closely follow all the anglers that were posting pictures of big catfish on social media and went fishing with some of the top guys in the state of NE and KS. I asked questions, thousands of questions, so I could learn more about this great art.

When I applied the information and techniques that I had learned, I started catching these magnificent fish from my own boat. It is very empowering and a wonderful feeling to be on the water in search of these giant fish. It’s just great being out there with nature, having the ability to move around on a body of water, and feeling the wind in my face. It must be similar to the feeling that my Harley Davidson-owning friends feel when they ride down the highway.

My catfishing seems to have become an obsession, but not a problem. Tournament fishing has introduced me to other men and women who share in the same obsession and that makes it alright. It’s created a brotherhood where I have met a whole new demographic of friends.

The sport of catfishing has enabled me to travel to new bodies of water to fish tournaments and opened opportunities to go on fishing trips that I never dreamed I’d have a chance to do.

Different bodies of water have different populations of catfish and some support harvest better than others. I don’t live in the greatest area for catfishing so it is very important that I let the big fish go. I want them to reproduce and carry on their special genes so someone else can catch a fish of a lifetime like I enjoyed doing.

Also, If I let them go, I may have the possibility of catching one of these fish when they grow bigger. I am pretty sure that at some point in time one of the 50- to 60-pound catfish I have caught had been caught and released by someone else when it was smaller.

I enjoy posting pictures and videos of my catfishing trips so that others can share in the excitement that I experience. I want others to see what big-time catfishing is all about. Conservation, technology, and equipment have come a long way in the last 10 to 15 years. Catfishing has been transformed from a game of luck to a game of science.

Catfishing is more than just hooking up the boat and leaving for the water. It requires starting days in advance by catching bait and mentally determining where I think the fish will be in relation to the wind and weather conditions. I also prepare by re-rigging my rods before every trip and making sure the boat has everything I need on it for any condition I may encounter.

I enjoy answering the questions that are sent to me about catfishing. And I enjoy the brotherhood of going to tournaments where we all share stories and tips and tricks of the trade. These kinds of things are important to me because if someone had not taken time to do those things with me I would not be the catfisherman that I am today. Now I can enjoy sharing with others.

I had a tremendous opportunity to take a Vietnam War vet out on my boat this year. He doesn’t own a boat but fishes a lot from shore. He had seen my pictures on social media and asked if I would take him out to catch a hawg.

He told me his personal best catfish was 25 pounds and asked me if we might catch a bigger one. I replied, “I got you, brother.”

The day we fished was warm with winds blowing 35 mph. I told him not to expect too much, but reminded him that I had caught a lot of my biggest catfish in big winds. We fished most of the day and caught a few small fish but not what we were after. Before we quit we checked out one more spot.

The new spot was an area where I had caught big blue cats before during high winds. Just as we were ready to pull up the rods and call it a day one of the rods bent over violently and almost ripped off the boat. I knew it was a big fish and I yelled excitedly for Mike to get the rod.

We were battling 35 mph winds and this fish was super strong. Mike had one of the biggest tests of his fishing career. Fifteen minutes later he landed his personal best 35-pound blue cat.

To see Mike’s smile and the sheer happiness on his face meant the world to me. I was able to share the same excitement that I get from reeling in a big one with someone else. That was a very special day that I won’t forget and I’m sure that he won’t either.

I now have a handful of wonderful sponsors and catfishing has grown into a mini career. It is bigger than I ever dreamed or thought of. The people I have met are absolutely amazing and it is one of the most exciting outdoor sports I could ever be involved with. Anyone from the age of five to the age of 100 can be involved and enjoy catfishing. That’s why I love it and that’s why it is so special to me.