Mississippi River Monsters 2021 — How They Fished 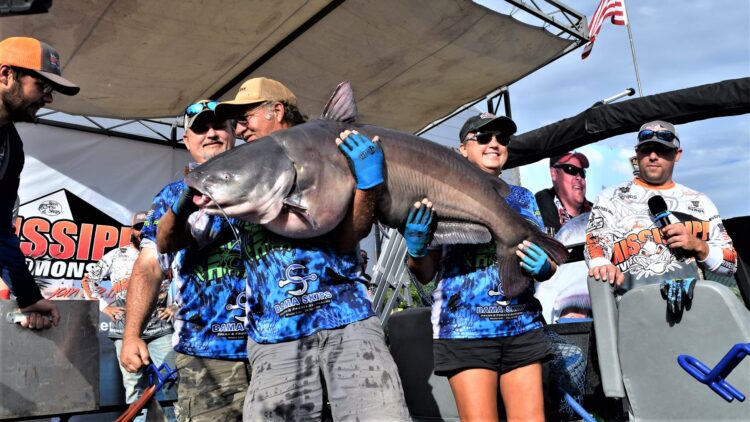 The 2021Mississippi River Monsters tournament out of Memphis, TN ended with lots of trophy catfish coming from the Big Muddy to the scales.  Spectators at the September 18, 2021 event witnessed 5,635.38 pounds weighed at Bass Pro Shops at the Pyramid.

One-hundred ten boats, manned by 273 anglers tackled the Mississippi River on a rain-threatening Saturday morning. Depending on whether they went upriver or downriver, different weather conditions were encountered.

“We stayed in Memphis and it was just cloudy,” reported SeaArk Boats president Steve Henderson. “A few minutes of light rain fell, but it looked very dark south of us. It was actually a perfect day to fish. Not too hot and enough wind to make it very comfortable.”

While the weatherman predicted light rain and mostly cloudy skies as described by Henderson, other anglers endured heavy rain that lasted much of the day.

When all the weights were in at MRM, a team from Alabama joined the Masingale Brothers as the only teams to win the event previously. The top spot was claimed with more than 150 pounds of Big Muddy catfish.

First Place and Top Female Angler
It was 2019 when Terry and Lisa Haraway first won the MRM. That year they had a total weight of 128.34 pounds. In 2021, with Chris Saunders joining the team, they won the 3-fish limit tournament with a whopping 156.60 pounds. 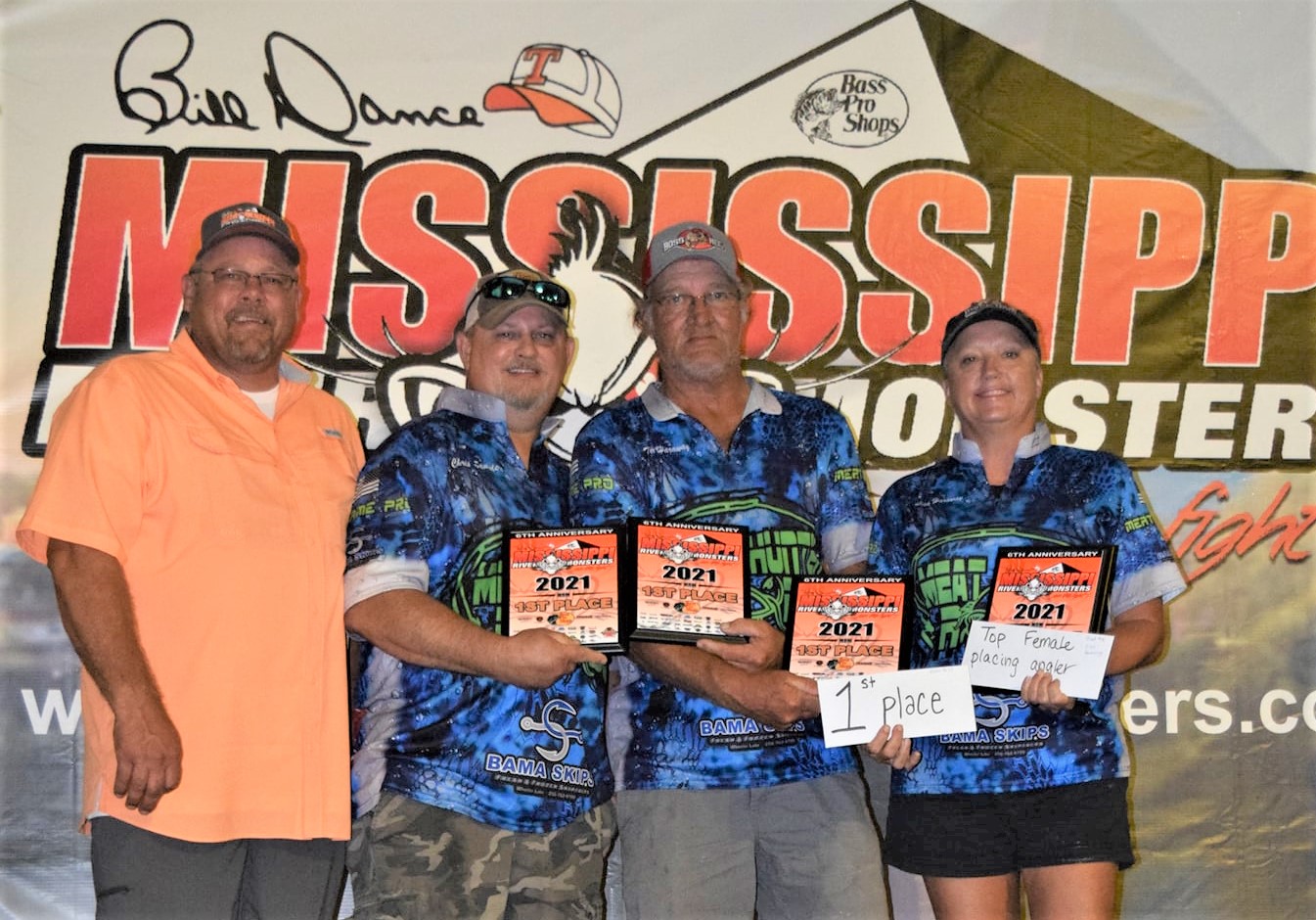 The Alabama team managed only 4 hours of prefishing. They developed a game plan to head downriver and try some dragging as they do back home. They picked up a few smaller fish but not what they were looking for so they decided to move.

“We all agreed to go try bumping. We wanted to see if we could get the hang of it and catch a monster. After 45 minutes of bumping in front of the granaries, I turned around and one of the guys was sitting down. The other one says, ‘We too old for this,’” joked Lisa.

Their bumping had not been productive. Lisa got 1 hit while bumping and missed it. Terry got a few nibbles but that was all. Once again the team had to consider a new strategy.

“After bumping at the grain bins we decide to try another spot,” recalled Saunders. “We went back to dragging in a sandy area of the river.”

“We all love dragging so we found a sandbar,” added Lisa. “We got set up and agreed to go big or go home. I cut just the tails off some Bama Skips skipjack and we started dragging with HUGE baits. It paid off!

Within 15 minutes a rod went down and Saunders pulled in a 65-pound blue cat. The decision to start dragging again and baiting big was the defining moment of the day.

“We used skipjack from Bama Skips,” confirmed Saunders. “In the last hour and a half of tournament fishing I pulled in my 65-pound blue and about 15 minutes later Lisa caught a 40-pounder.”

“After catching my 40, I told Terry he could catch the next one,” continued Lisa. “He responded by saying he wanted a good 20-pound under or an 80.”

“Lisa and I had to rerig some rods,” said Saunders. “We got the Boss Hog Rods from Meat Hunter Rods rigged and back in the water. Then Terry got his personal best blue at 85 pounds. Now we had 3 overs so we had to cull Lisa’s 40.” 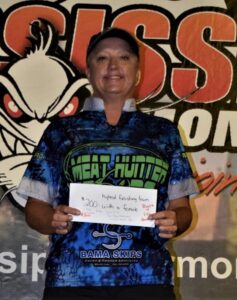 Time was running out so the team packed up and headed for the scales. It wouldn’t be until after they weighed that they knew they had won the MRM for the second time and also earn Lisa the Top Finishing Female Angler award!

“We had a great time at Mississippi River Monsters,” concluded Lisa. “MRM is always an exciting, fun event for us. We want to thank George Young and Glen Thomas for a first-class Tournament. Thanks also to all the staff, Cory Ramsey, Chris Ramsey, and Jessie. Finally, a special thank you to all our prostaff companies—Meat Hunter Rods, Cat River Anchors, B-KAT Boards, Demon Dragons, Pipeline Tackle, Hookers Terminal Tackle, RS Nets, and Smackdown Catfishing 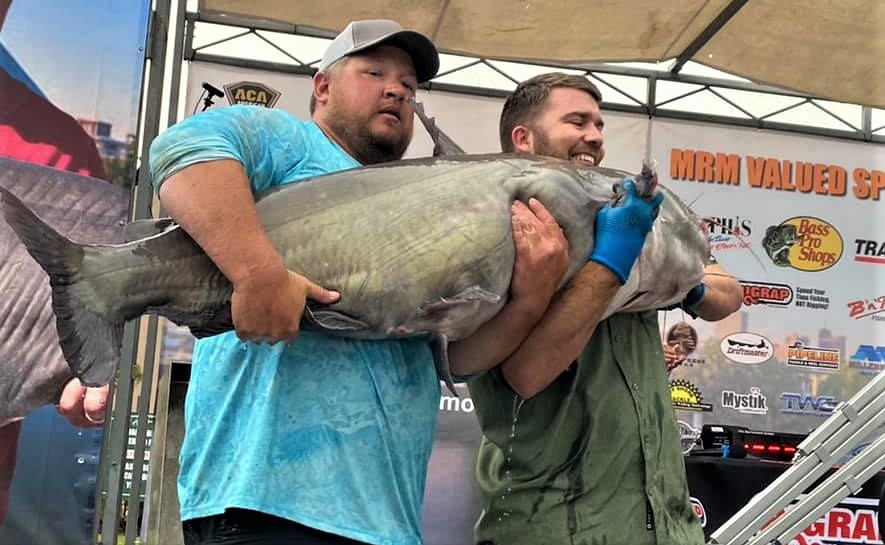 The runner-up spot went to Team Rummel from Kansas. Nolan Rummel and Christopher Harlan weighed a 3-fish limit of 140.27 pounds to take the second place honors. Their bag included Big Fish of the tournament at 102.45 pounds. They brought the big fish to the scales early in the name of good fish care. The second-place finish also earned the team Top Finishing Veteran award. Both Nolan and Chris are veterans.

Rummel and Harlan began their day dead sticking as they slowed the drift with the trolling motor. At the same time, they were bumping out the back in 45 to 50 feet of water.

“It was a really heavy fog when we started,” recalled Rummel. “We were downriver from Mud Island a couple of miles. My partner, Chris, had gotten hung up on his dead stick and ended up breaking his line. In the meantime, I caught a few 20-pound fish on my down rod.”

Rummel encouraged Harlan to get rigged back up and in the water. The next several minutes would change their day immensely when the newly rigged pole with Boss Kat hooks was deployed over a sandy bottom. Rummel described the rod as a 9-foot Eagle Claw with a Penn Reel that he had since high school.

“It wasn’t 45 minutes and the big fish smoked it,” said Rummel. “He hit a big body section of skipjack. The fight was on. We would get the fish near the surface and then it would just go straight back down taking 40-feet of line with it.”

They got the big fish near the surface again and once again tried to net it without success.

“I could tell he wasn’t ready yet,” continued Rummel. “It pealed out another 20-feet of line or so. The next time it surfaced I got a clean shot with the net and the fight was over. It was an amazing experience. We were so proud and pumped that we erupted into a bunch of backslaps and high fives and a lot of yelling.”

Rummel and Harlan added two more fish to fill their 3-fish limit. After weighing in early they stayed at the top of the leader board for hours as other anglers came to the scales.

Nolan has had plenty of encouragement to become the angler that he is. Growing up in Kansas and being boyhood friends with his now fishing partner, Christopher.

“Them boys grew up on the Cottonwood River in a small Chase County, KS community,” said Brenda Kinkin, Nolan’s mom. “I think there may have been some angels hanging out by their boat on Saturday. We are all so excited for them.”

“Nolan has been working hard at getting a guide service going with the help of his brother who is in Saudi Arabia,” continued Brenda. “Nolan has had a lot of things happened to bring him to where he is at today—a lot of life challenges. I have told him over the years that everything happens for a reason and what does not break you makes you stronger. Always trust in God and have faith.”

One of those challenges included losing a boat that came off the trailer. It was very disappointing a the time. But his mom’s advice, “everything happens for a reason,” took on new meaning. He now fishes from a SeaArk ProCat, the boat of his dreams. 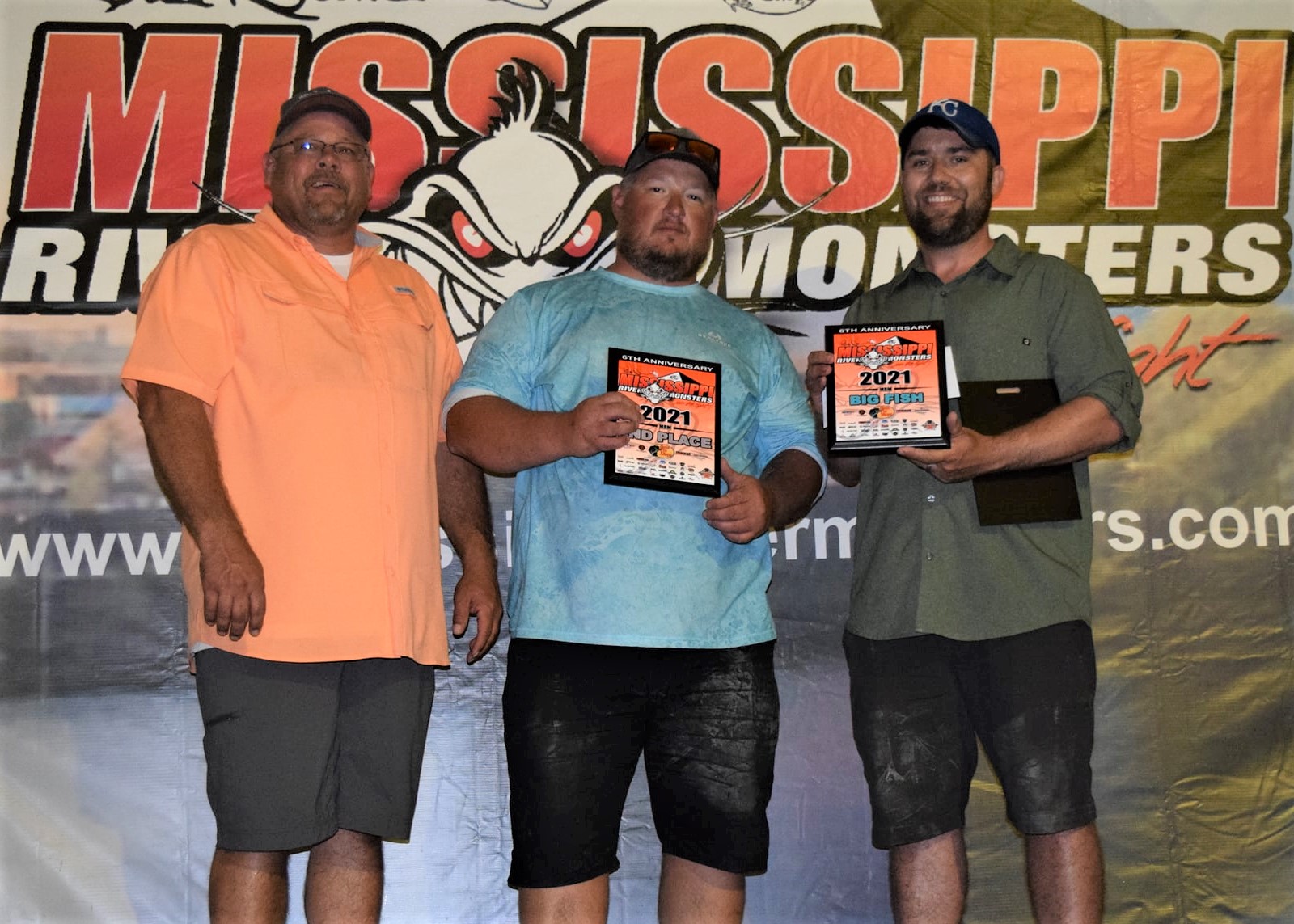 “We want to thank the tournament organizers,” concluded Rummel. “Also thanks to the guys that were weighing in the fish. Chris, Cory, and Jesse did an awesome job. It seemed like everything went really smoothly and was an awesome event. We also want to thank Larry Muse and Stacy Gaston for their awesome seminars. Finally, thanks to Glen Thomas who was really helpful in explaining to my buddy how to join the hundred-pound club.”

Nolan operates Rummel’s Guide Service (rummelsguideservice.com) for spoonbill in Oklahoma and on Milford Lake in Kansas. As a young tournament angler and guide, he is currently soliciting sponsors. He can be reached through his personal Facebook page. 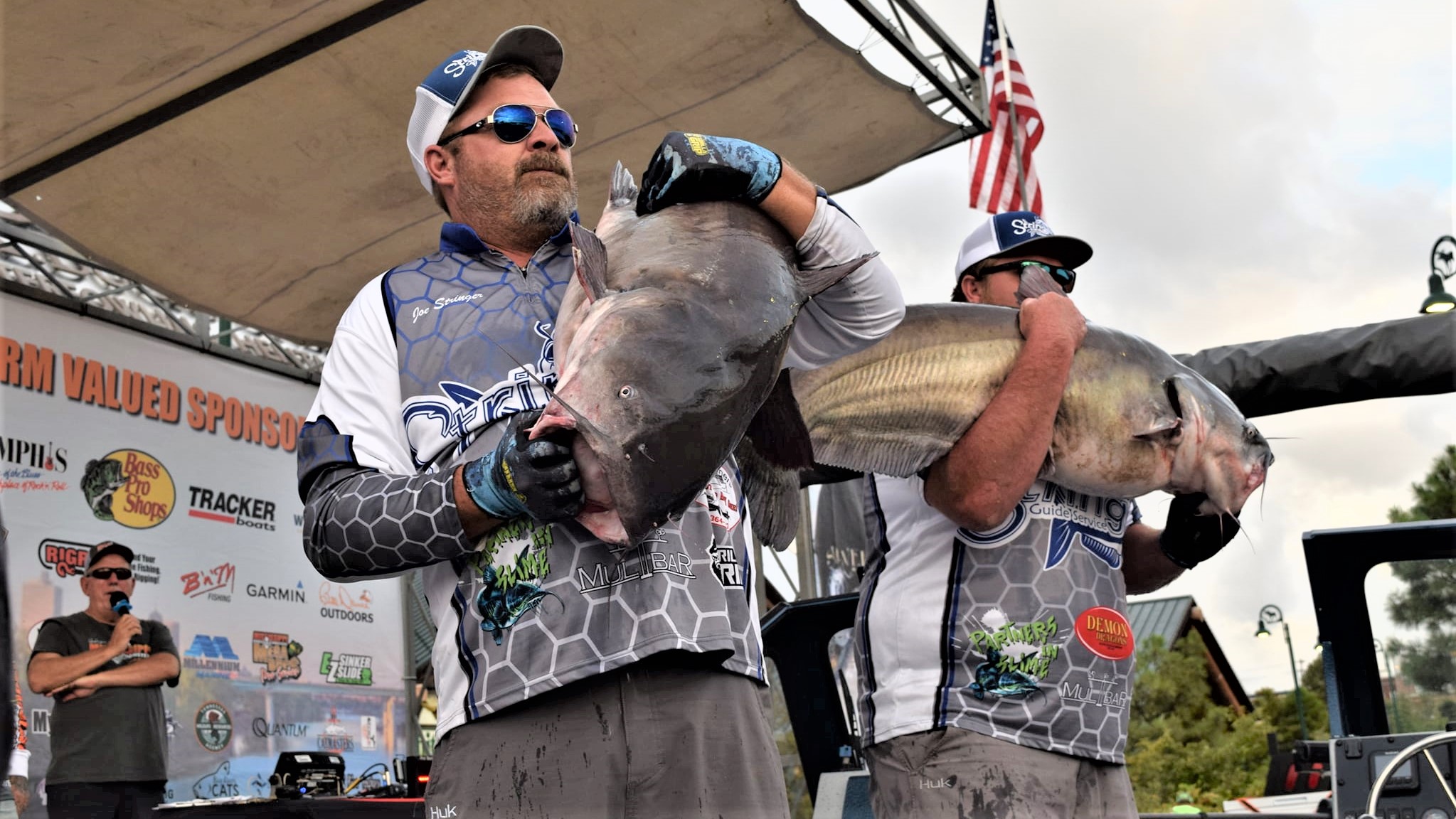 Joe Stringer (Stringer Guide Service), and his sons, Chase Stringer, and Blake Stringer made the trip from Kansas where Joe guides on Milford Reservoir. The team had the right numbers for the third spot at MRM 2021. As the last boat to weigh, they brought an even 132 pounds to the scales at the Bass Pro Pyramid to claim the third spot.

“We started our morning with a nice boat ride downriver,” reported Joe. “The rain came in about 9 o’clock in the morning and stayed with us until 2 o’clock in the afternoon. It was mostly just heavy rain. We work through the conditions and caught a few nice fish.”

Team Stringer bumped structure and revetment bank in deeper water. They reported catching eight fish total for the day. They described the fishing as “tough” but they kept grinding. Their secret was keeping baits in the water all day long.

“We would like to thank George Young Jr. and his staff,” complimented Joe. “They did a wonderful job on the tournament this year. I’d also like to thank my sponsors, Monster Rod Holders, Parks Planer Boards, Tackle Bandit, Pipeline Tackle, Gorilla Grip Gloves, Partners in Slime, MulTbars, and Demon Dragons.”

“I always enjoy getting to see lots of friends,” concluded Joe. “And spending a little time out on the water back in my home state of Mississippi. Since my fishing team is my sons, anytime I get to go on a fishing trip with them is time well spent.” 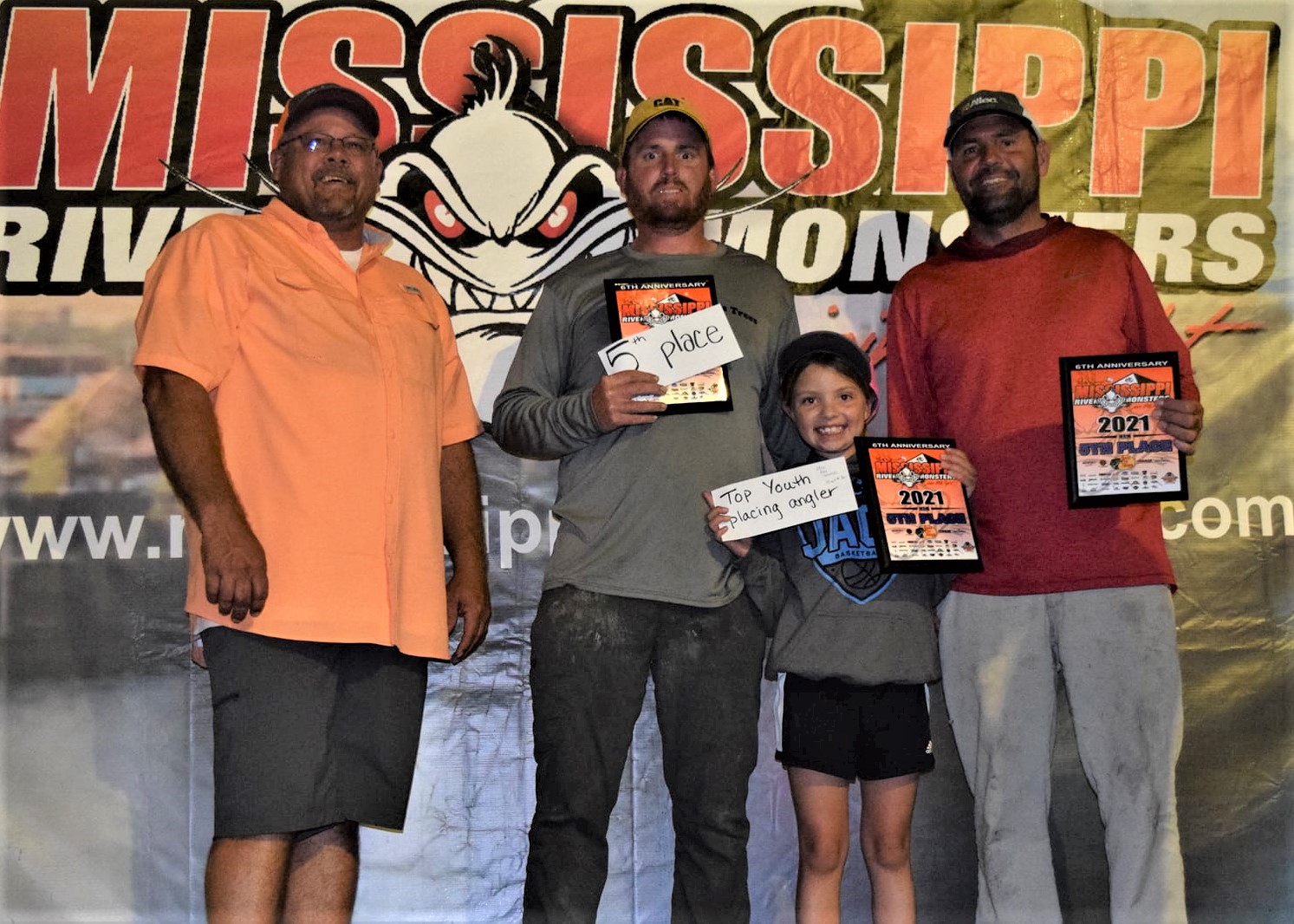 The Top Finishing Youth Angler in 2021 went to Alex Petrowski. She was fishing with her dad, Tom Petrowski, and Henry Neafus. She helped them put 113.94 pounds in the boat and earn fifth place in the competition. This was the second year in a row that Alex claimed the title.

“Alex was very excited about her award,” revealed Tom Petrowski. “She even talked about the award before the tournament, stating that she was going to win some money. She hung in there for two days on the water and earned her prize.”

Mississippi River Monsters originator and director, George Young Jr. can be proud of another awesome event. He assembled a crew of volunteers and sponsors that make MRM what it is and why anglers like to come to Memphis and battle it out on the Mississippi River.

Two of those volunteers were Chris and Cory Ramsey. They were joined by Jessie Adams. The team handled the stage duties at the event flawlessly. Their tournament experience helped keep things running smoothly.

“We can’t do what we do without our right-hand man, Jessie Adams,” said Chris Ramsey. “He takes care of all the fish and we couldn’t do it without him. He can be seen busting his tail at every tournament we are a part of.”

“Mississippi River Monsters is the cream of the crop,” concluded Cory Ramsey. “The anglers we’re all in great spirits. Nothing but smiles. And the crowd was absolutely amazing. The camaraderie of this week-long event is hands down the best in the nation. We have a blast working with George Young Jr and the entire MRM crew! From the Memphis Yacht Club all the way to the final day at the Bass Pro Shops Pyramid when we were on stage with the legendary Bill Dance! It just doesn’t get any better than that.”