King Kat Tournament on Missouri River at KC – How They Fished 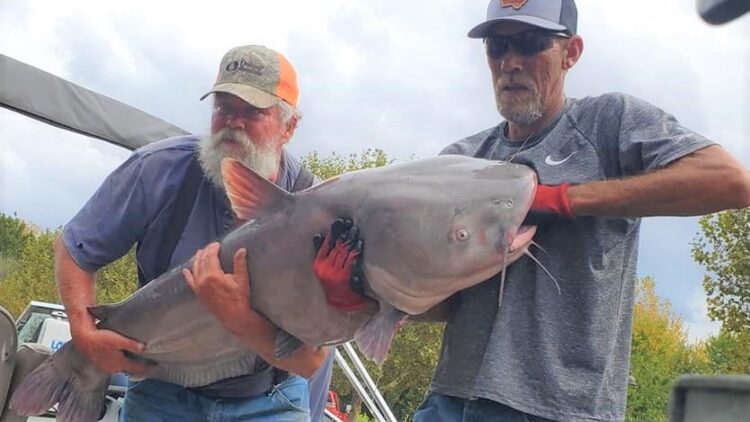 Most anglers reported a tough bite on the first day of fishing. They experienced fairly good fishing conditions with overcast skies, 5-10 mph winds, and air temperatures in the 70’s.

The day-one weigh-in at Kaw Point Park resulted in Eddie Henney and  Adam Funk taking the lead with a 3-fish weight of 87.19 pounds. Marty Darrah and Wayne Stevens followed in second place with 60.34 pounds and John Hoverson and John Burglund weighed 54.79 pounds to hold the third spot after one day of fishing. 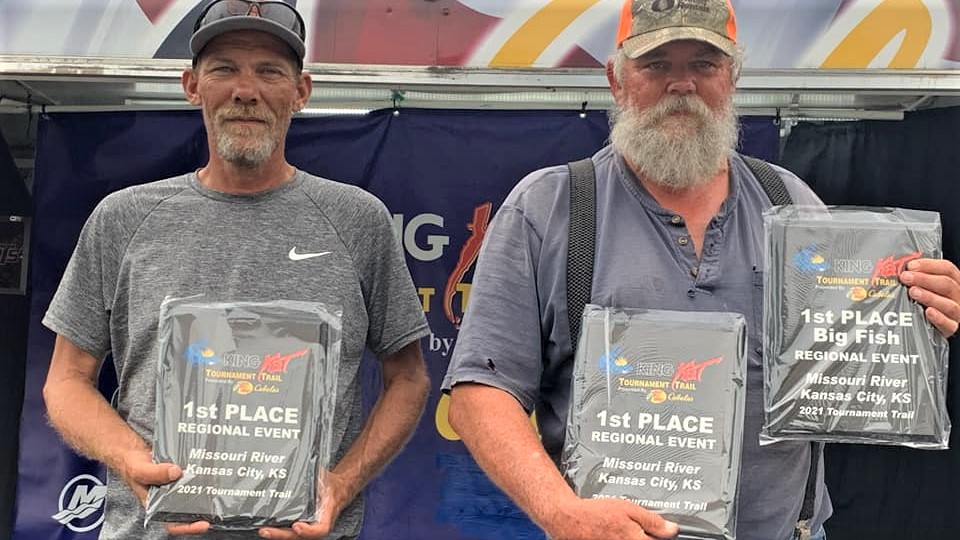 A Missouri team took the top spot at the Kansas City event. Marty Darrah from Lee Summit, MO, and Wayne Stevens from Norborne, MO. teamed up to bring a whopping 160.34 pounds to the scales in a 5-fish for two days of fishing. They earned the first-place check of $10,000. Their bag included Big Kat of the tournament at 92.03 pounds and added $340 to the payday.

Darrah and Stevens used the same method of fishing both days as they moved up from second place on day one to claim the top spot. The team was targeting Missouri River wing dykes with cut mooneye for bait.

“We walked bait both days,” reported Darrah who has been fishing the Missouri River since 1978. “We were in 15 feet of water on both days. You just have to keep your bait in the water. The river is different every day.”

“It was the toughest two days of fishing that we have experienced,” added Stevens. “Only 4 bites on day one and 2 bites on day two. The weather was fair on both days with a chance of rain. On day one we concentrated on a 3/4 mile stretch of river targeting  outside bends in 15 to 20 feet of water.”

The team bumped that stretch of water until noon. They got one 10-pound blue around 10:30 am.  They moved to another section until 1:00 pm before returning to the original spot where they got 3 bites and added 10, 29, and 21-pound fish.

“One day two we came back to the same stretch only to have 8 other boats join us,” continued Stevens. “We bumped this stretch until 10 am with no bites. Then we tried everything from anchoring to suspending baits.”

Around 1:00 pm Darrah and Stevens went back to bumping their original spot and caught an 8 pounder. They moved another half-mile and began a drift.

“About 100 yards into the drift I hooked the big fish,” recalled Stevens. “After a pretty good fight, we were spent and took our chances on weighing in early with 2 fish.”

When asked how the 92-pounder fought, Darrah replied, “Too long for an old man!” 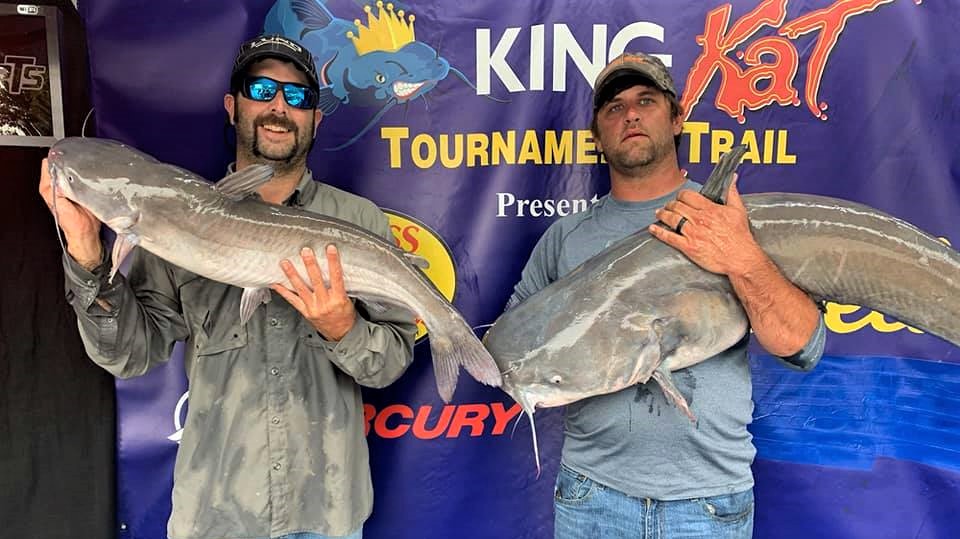 A team from Kansas took the runner-up spot. Joel Roberts from Olathe, KS, and Justin Claar from Spring Hill, KS scored a two-day total of 128.86 pounds to earn the second-place check of $4,000.

Roberts reported a normal day of fishing with nothing unusual happening. He also indicated that in weeks prior to the tournament that bumping outside bends in the river had been really good. But the majority of the fish had left those areas by tournament time. They chose fishing on the rope to catch their fish.

“It was just a slow bite,” recalled Roberts. “So we had to grind it out. We anchored on mudflats between the wing dikes with big wood that was adjacent to the good outside bends. The flats ranged from 8-12 feet deep. Our bait of choice was freshly caught mooneye and frozen skipjack.” 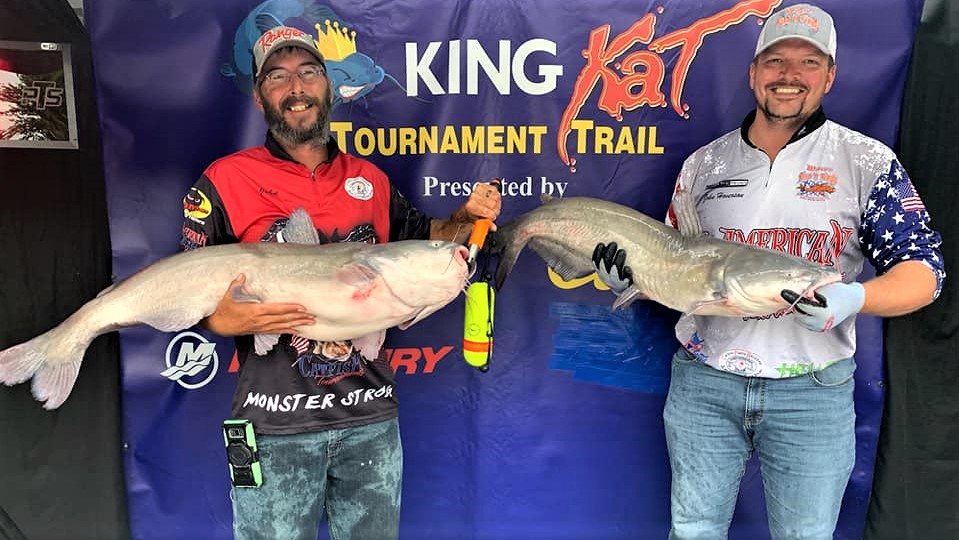 John Hoverson from Smithville, MO, and John Berglund from Lawrence, KS, held down the third-place spot going into day two. They brought a two-day weight of 125.69 pounds to the scales to hold on to their third-place spot and earn a check for $1,500.

The team was sort of a last-minute development when Hoverson invited Berglund to fish the KC event with him in his new Dynasty. Berglund jumped at the chance because he had been wanting to fish from one.

“The weather conditions were pretty good,” reported Berglund. “There was a chance of rain in the forecast, but it seemed to miss us, thankfully. Overcast skies and temperatures in the ’70s made for great fishing weather.”

Hoverson and Berglund considered the bite to be decent for the Missouri River. The day one bite started a little slow and it took the team almost 2 hours to put the first fish in the boat. They were bumping in 18 feet of water or deeper. It seemed if they got any shallower the fish just weren’t there.

“On day two we decide to go right back to the same spot,” explained Berglund. “We knew there were more fish there and good ones at that. The weather was about the same other than some thick patchy fog on the water which makes things interesting in the dark. As fishing time started we began a drift and within a few minutes, we were hooked up. We put 3 fish in the boat in the first 45 minutes and thought it was gonna be lights out. Within about an hour and a half, we had caught 5 fish, 3 of which were our day 2 weigh-in fish. We were stoked. But then the sun popped out and it seemed as if the fish had just shut off. We fished hard for the rest of the day and John caught 2 more small ones.”

“Our strategy was to bump and cover ground,” concluded Berglund. “We caught 13 fish total for the 2 days which isn’t bad in my opinion. We’re a bumpin’ team and as long as it’s working that’s what you’ll find us doing. We finished strong and managed to hold on to our 3rd place spot for 2 days of fishing.”

“The fishing was pretty tough overall,” added Hoverson. “We were able to grind out some solid fish both days but could not find the one good bite we needed. We were very pleased with our finish because this tourney was loaded with incredible fishermen.” 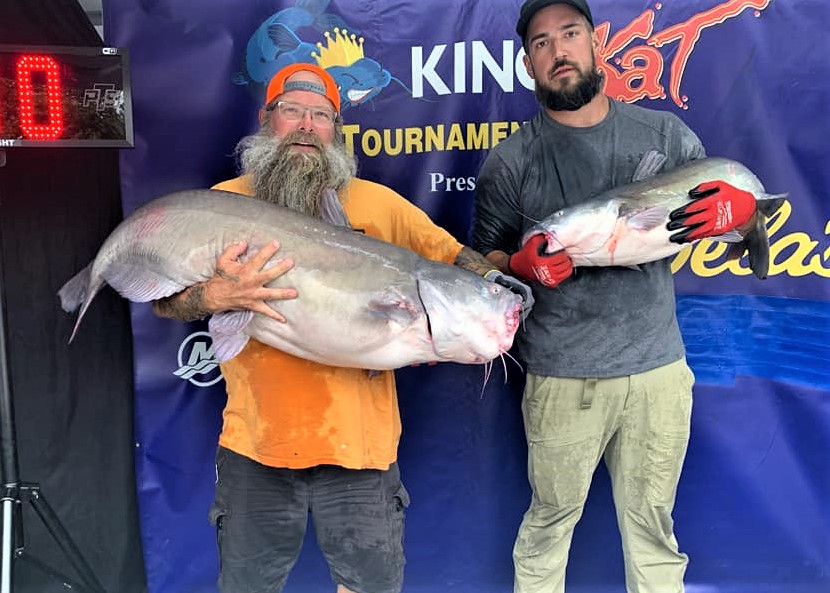 Finishing up the money places was Justin Thornton from Pleasant Hill, MO, and Duane Buckridge from Kansas City KS. The teammates carried 123.95 pounds to the scales in the two days of tournament fishing. Included in their bag was Buckridge’s new personal best 68-pound blue cat. They earned a check for $500.

Thornton and Buckridge reported “really slow fishing.” They had 4 bites on Friday and only 2 bites on Saturday. The big difference was the Saturday bites were good ones.

“We were fishing 25 feet of water,” reported Buckridge. We were bumping with skipjack and shad for bait. The bigger fish on day two both were caught on skipjack. It was cloudy most of the day on Friday with a very light breeze. On Saturday the fish got bigger but still not many were caught. It was very tough fishing.”

Epilogue
Tournament director, Willy Pranker thanked the City of Kansas City, KS, and Justine Stine for helping put the Missouri River event together. He also thanked Angel Obert and Laura Calwell from Parks and Recreation for their assistance.

The 2021 Championship
This year’s King Kat Classic Championship will be held on the Red River at Natchitoches, LA, November 5-6, 2021. The Classic features a guaranteed payout of $125,000 in cash and prizes. The points race is set to pay $30,000 to the top 20 places based on the competitor’s top-five finishes.