World Championship of Catfishing – How They Fished 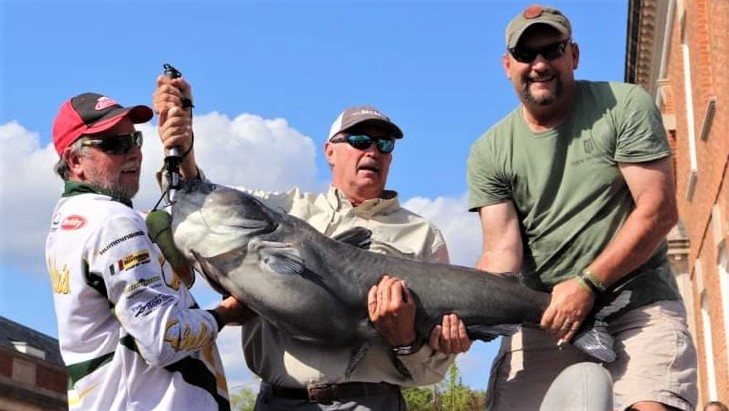 Phil King and Tim Haynie Repeat Win at World Championship of Catfishing Out of Savannah, TN

Deceased Big Cat Quest tournament director Ken Freeman presented the event for many years. Before directing the event, Freeman had fished it many times with his dad. Following Freeman’s passing, JR Sweat took over the directorship and kept the event going.

Joining Sweat (Tennessee River Productions) to keep the tradition going is a host of organizations and volunteers. The overall event includes a Catfish Rodeo that ran from August 29 through September 25th.

During the Catfish Rodeo, a prize of $100 is given to the heaviest catfish caught each week leading up to the big tournament. The winners on tournament Saturday receive World Championship of Catfishing Belts and special awards are presented to the top youth, lady, and senior angler participating in the event.

A special guest, Mountain Man from Duck Dynasty, appeared on Friday from 4-7 p.m. at Savannah Theater during the tournament registration, and again at the weigh-in on Saturday. He fished the tournament with Cedric Poynor and Jason Rowland.

There were plenty of free public events for visitors to Savannah. They included a classic car show, live music, and various craft vendors at Savannah Market. Local food and retail vendors were set up at Court Square. It was a great family-oriented event with something for everyone.

There were 20 boats registered in the event and 13 boats brought fish to the scales at the weigh-in area in downtown Savannah, TN.

Phil King and Tim Haynie from Corinth, MS brought 138 pounds to the scales to claim the 2021 title of World Champions of Catfishing for the second year in a row. They also had the big fish of the tournament at 59.40 pounds.

King and Haynie are not new to the WCC, having won it several times over the years. In fact, King has earned the WCC Championship Belts six times. This was the third win for Haynie.

After last year’s win, King said, “Sometimes in a tournament if we get 5 bites that are good bites. But in tournaments we have won over the years we got 10-15 quality bites and we didn’t wipe em’ out the day before the tournament.”

King and Haynie got the bites they needed in what they described as one of the best days they have fished on the Tennessee River.

“We changed our complete tournament plan early that morning,” recalled King. “On the way to the river, our prefishing was thrown out the window due to the water jumping up. They had 107,000 cfs flow out of Pickwick Dam. Normally it would be around 30,000 to 80,000 cfs maximum without the gates open.”

Fishing started off well for the tournament-tested team. King bumped up a 29-pound blue on the first drift. Haynie followed up with a 41-pound blue on the second drift. By 9:30 am they had both of their over 34-inch fish including the 59.4-pound blue that took Big Fish honors.

“We downsized our baits after that,” declared King. “We started working hard to catch the under 34-inch fish we needed. We had a 1, 5, and 10-pound under, and then about 10:30 we moved downriver.”

The team’s move was based on advice from a previous partner and dear friend, Leland Harris, that had since passed away. The advice gave the location to try if he ever needed to catch a 10 to 15 pound under in a tournament. It was great advice from a great fisherman.

“We took that advice,” explained King. “And we caught two fish that averaged 14 pounds. That topped off our weight at 138 pounds, including the 10-pound fish we already had.”

This was the first tournament that Haynie had fished since having two surgery’s earlier in the year. King told him that he would take care of him and not mess up the surgeon’s work. King fulfilled his promise by driving the boat and netting Haynie’s fish, including the Big Fish of the tournament.

“This was one of our best days fishing the Tennessee River,” concluded King. “We threw back four fish over 34 inches. But the best part of the day was having Tim get to fish after his surgeries.”

The second-place team included Cedric Poynor, Jason Rowland, and the event’s special guest, Mountain Man (Tim Guraedy) of Duck Dynasty fame. They also had Anthony Landreth in the boat doing some filming and taking pictures. The team brought 120 pounds to the scales to claim the runner-up spot. Most of their fish came upriver from Savannah.

“It was pretty chilly to start the day and there was a light fog over the water,” recalled Poynor. “We used our B’n’M Bumping Rods all day in current that was running about 2 mph.”

Mountain Man was not familiar with bumping, so Poynor gave him a “crash course” on the technique. And somewhere near Shiloh Mountain Man caught his first blue cat while bumping.

“Being on the Tennessee River with good company made for a great day,” continued Poynor. “We started out with a perfect 18-pound under. We celebrated that fish because it was Mountain Man’s first fish bumping and his personal best (PB) catfish.”

They decided to move around a little and Poynor vowed to get Mountain Man a bigger one. When they got fishing again, Poyner felt his bait stop. He reeled down and felt the hookset as the drag starts peeling line out towards deeper water. 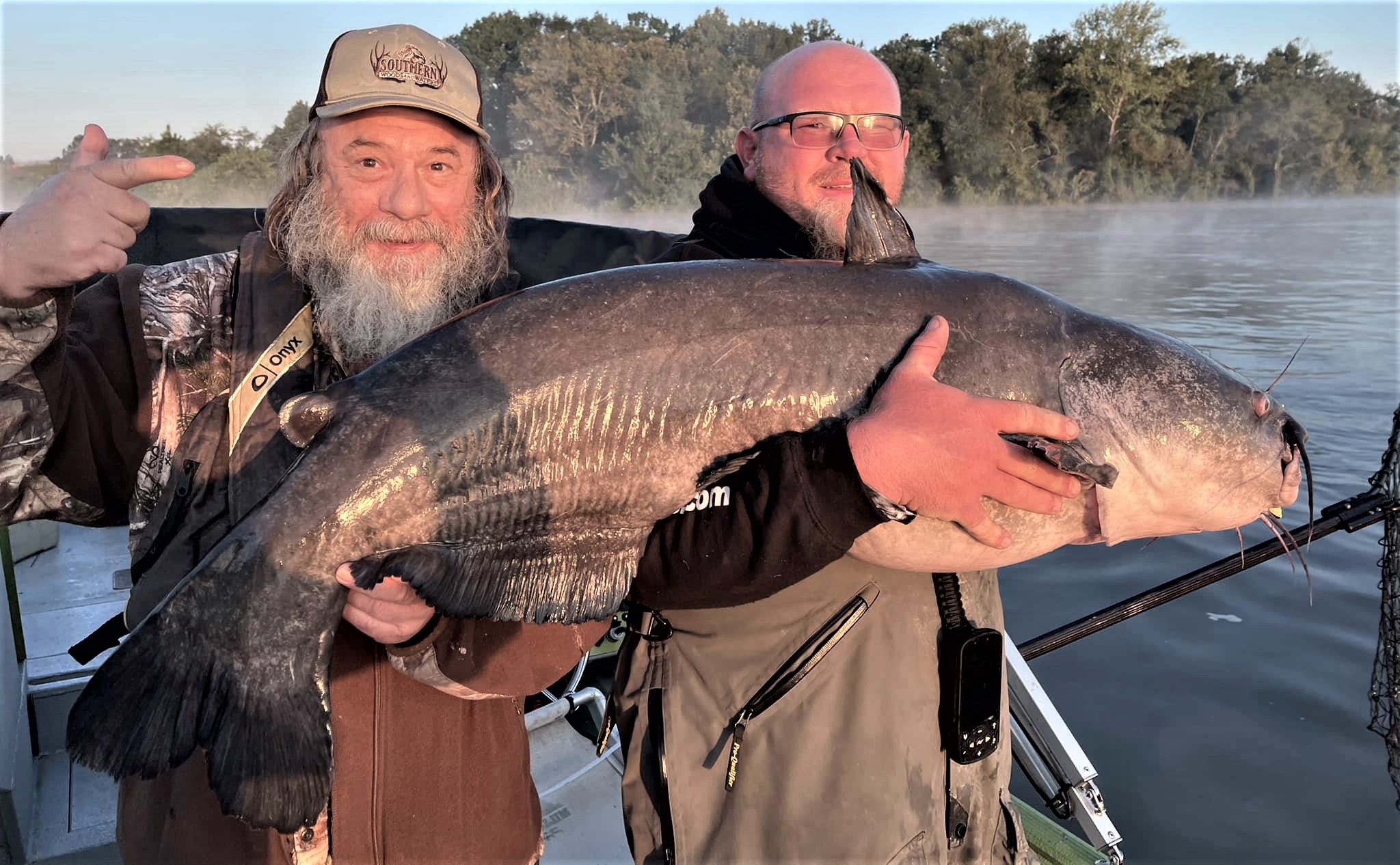 “I handed the rod over to Mountain Man and he goes to work on it,” explained Poynor. “Once I got the boat over the top of the fish we started the battle to get the fish off the bottom and into the boat. The fish finally comes up and is netted and Mountain Man has a new PB that’s gonna be hard to beat.”

The day continued to be action-packed fishing. They continued to fish hard and it paid off. Rowland and Poynor hooked up and hands off to Mountain Man and he puts numbers 4 and 5 in the boat.

“We move again and start the culling process,” Poynor said. “Mountain Man hooks up and puts another fish in the boat. We make another move and Jason has one slam his bait and he puts a 22 pounder in the boat. We culled until we had 120 pounds to weigh in. It put us in 2nd place!”

“We started off with a good bite,” confirmed Rowland. “Then it got better from there. We were able to watch Mountain Man reel in his biggest catfish and then beat his own record. I was able to catch a couple that got to stay in the live well for the weight in. It was an awesome weekend. I don’t think I have had this much fun in a long time.”

The team went on to thank their sponsors that help them do what they do. Poynor’s include B’n’M Poles, Big River Cats, River Rat Reel Repair, and WavePro Seats. Rowland added Mossy Oaks Wellness for the Focus and Recovery drinks. 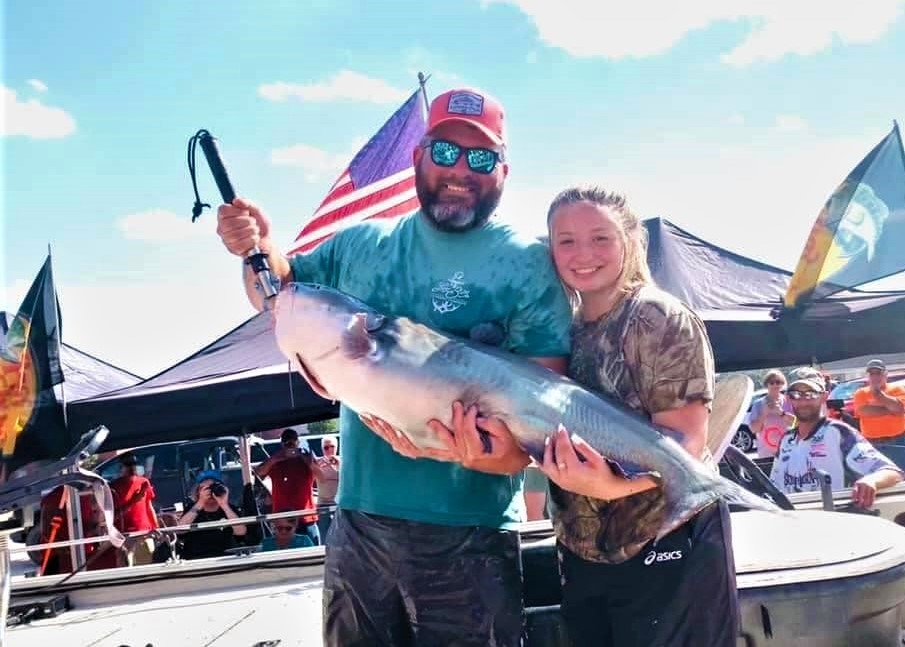 Brad Mancell and his niece Aleigh Jordan teamed up to fish the 80th World Championship of Catfishing. They brought 118.20 pounds to the scales to claim the third-place spot.

“We fished in the lake,” reported Brad. “The weather was perfect with the wind blowing at only 5 mph. We trolled plainer boards in 25 feet of water. Skipjack was our bait of choice.”

The team had a great day of fishing. Brad said he wasn’t sure how many cats they caught, but it was somewhere between 15 and 25.

“It started out a little unusual,” concluded Brad. There were 280 boats leaving out of the ramp that morning for a bass tournament. It made it a little rough at first, but after that is was a normal day of fishing.”

David Coughlin and David Wooley took the 4th place spot with 107.20 pounds. The team finished in the same spot in 2020.

Gary Bishop fished and Chad Mayfield teamed up for a fifth-place finish. They walked baits back through structure all day and brought 70.40 pounds to the scales to finish in the top five. 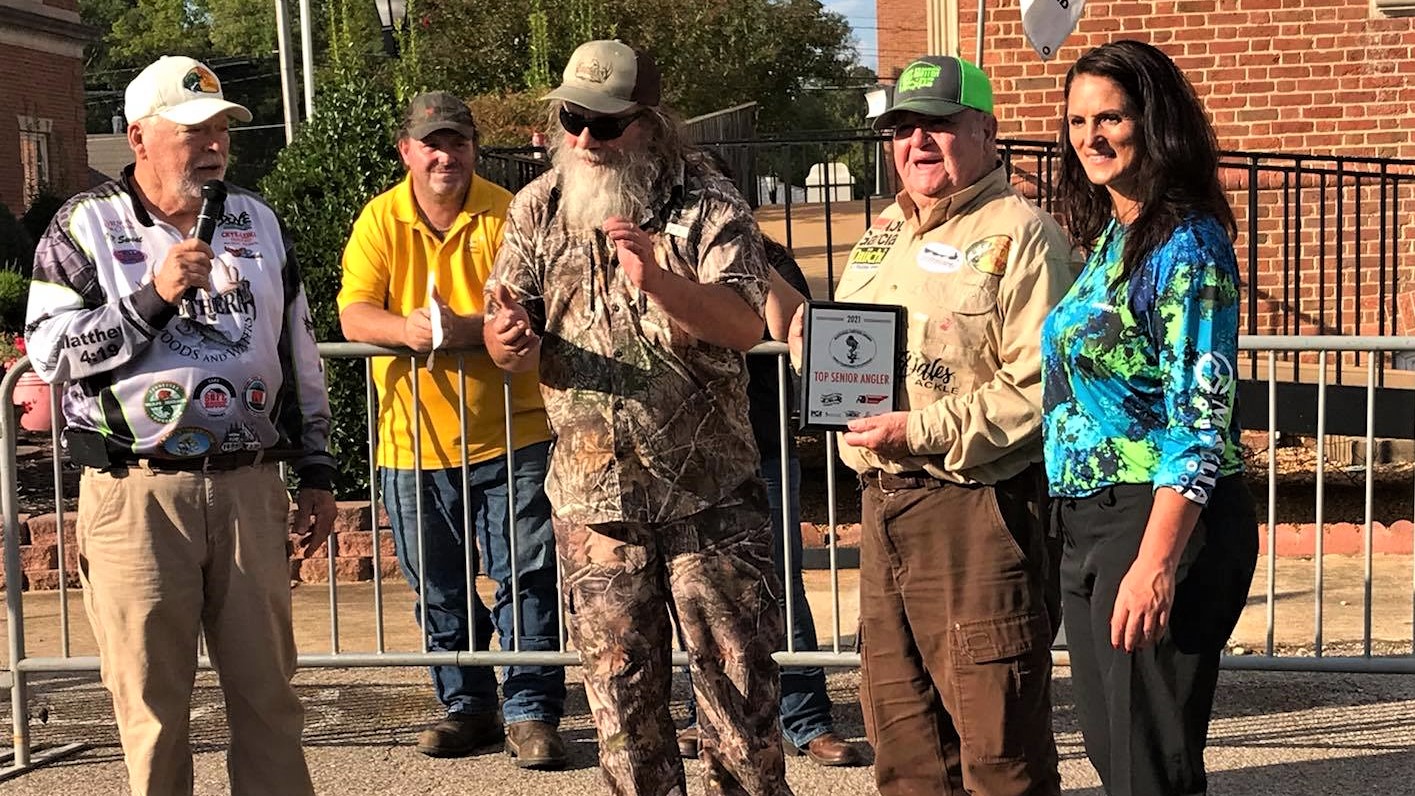 The top senior award goes to the boat that weighs in the heaviest bag and has a senior in the boat. Frank Meador (“Pops”) was fishing with his sons, Larry Muse and Dino Meador. They had a weight of 38.20 pounds to give Frank the title. There were 3 other seniors in the competition.

Jr Sweat has been producing the event for 4 years now. He hopes to continue the WCC with a focus on making it better.

“I want to thank everyone who came out and fished with me,” said Sweat. “We had 21 boats, beautiful weather, good times, and some of the best fishermen in the country.”

“I can’t wait to see everyone next year,” concluded Sweat.

Editor’s Note: Thanks to Joyce Muse for providing tournament information and content for this story and to Vicki Spears for supplying some photos.