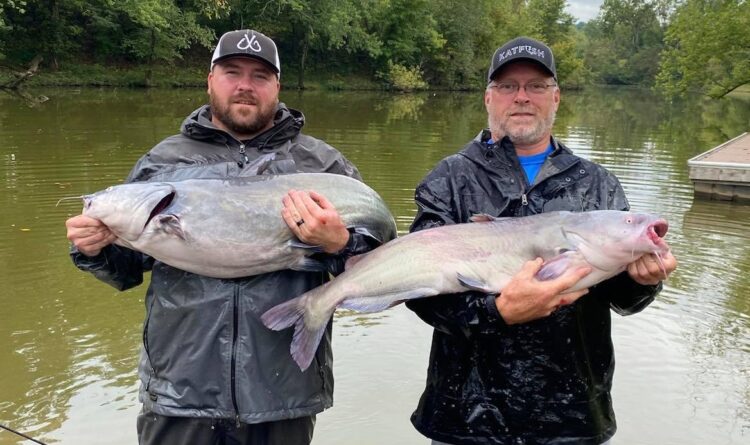 Father/son team of Brian and Josh Antill win the 2021 two-day Championship with a one-day record bag of 152 pounds in 4 fish.

The Kanawha River Catfish Club recently held their end-of-year club fish-off. It was a two-day event where anglers could weigh 4 fish each day. On the final day, a new one-day record was set by a pair of Charleston, WV anglers.

The Championship was held with each of the two days of fishing on different rivers. Day one competition took place out of Poco, WV on the Kanawha River and day two was out of Point Pleasant, WV on the Ohio River. 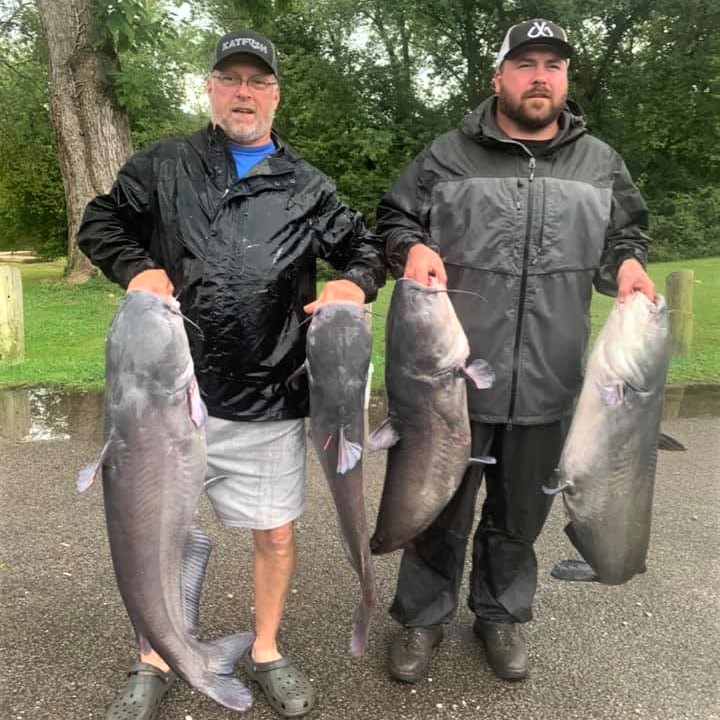 The father/son team of Brian and Josh Antill struggled on the first day to locate quality fish and they missed a couple of good fish that did bite. They ended the day on the Kanawha with 50 pounds. It was enough to keep their hopes up to maybe still finish in the money on day two as they were setting just about in the middle of the pack.

“The morning of day two comes around we hit a bank we always do,” recalled Josh. “We start dragging baits upriver along a ledge where we picked up a few small flatheads and channels. As we get to about the end of the drag we hook into a good one. Once it is in the boat it’s a 41-pound blue.”

At the end of the drag, Josh asked his dad if he wanted to run that ledge again? If so, he suggested staying more on the flat side. Brian agreed and they made the same pull but kept the baits up on the flat.

“As soon as we reached some rock we caught a 23-pound blue,” said Josh. “Then I missed another one. But as soon as I threw it back out I caught a 41-pound blue.

The team is feeling pretty good by this time. They are happily thinking about being in the money with some good fish.

“With about an hour to go we reach the same spot where we caught the first 41-pounder,” explained Josh. “I went to the front of the boat to get a pole that was hung up. At the same time, I looked up and see a planer board flying through the water.”

Brian grabs the rod and the fight was on. Once they land this big blue they have added another 47 pounds to their day-two Ohio River total. They make it back to weigh-in and officially have 152 pounds on day two in 4 fish. It’s a new one-day record for the club, beating the old record by about 30 pounds. Their two-day total of 202 pounds gave them the top spot in the tournament and the 47 pounder was good for Big Fish honors.

As the team made their way back to weigh-in Josh was remembering that they had spotted an eagle flying around. Josh got to thinking about the eagle and realized a connection between the eagle sighting and their fishing success. Could it have been a lucky charm?

“It was unusual, even rare to see an eagle,” recalled Josh. “We watch it for about 15 minutes flying around and catching fish. As I thought about it, I realized that we have always caught some big fish when we see an eagle. I never put it together until we were going back to weigh-in and I told dad, ‘You know, I think we caught some good fish because of that eagle.’”

That seems like a great end to the story, but it’s not the end. It turns out that the previous directors of the Kanawha River Catfish Club are stepping down. Brian and Josh decided that along with some volunteer help they would run the club that they have been participating in for the last six years.

“Basically we are going keep the tournament the same,” concluded Josh. “It has been running very well in previous years by Adam Scott and Cody Williams and doesn’t need much change. We may consider adding a couple more stops, and maybe a one-day, 10-hour fish-off. We also hope to get some more sponsors to support us and just continue to grow the club and make it successful year in and year out.”