Flatheads Are in a Class All Their Own 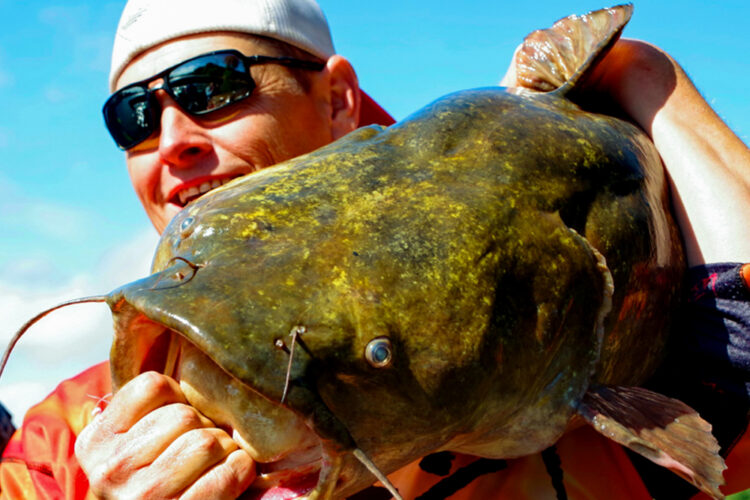 Flatheads begin a major growth spurt at age three, commonly adding two to five pounds per year until eight years old. After that, they continue packing on the pounds—up to 10 pounds annually in some southern waters. The large sizes they reach make them popular targets.

Why I Love Catching Flatheads

You’d be hard pressed to find a fish with more positive attributes than the flathead catfish.

Flathead catfish tend to be unsightly creatures. Their flattened head looks like it was run through a trash compactor. They have beady, wide-set eyes and a thickened under-lip protruding in a perpetual pout. Worm-like barbels dangle from the chin, and the fish’s hide has the same color and texture as a garden slug. Despite their ill-favored looks, however, flatheads rank at the top of my favorite-fish list.

Channel cats are up there, too. I’ve caught and eaten thousands. And who wouldn’t enjoy the extraordinary battles one experiences with big blue cats. Even our pint-sized bullheads create fun on the water when targeted using light tackle.

Flatheads are in a class all their own, though. The channel cat and blue cat belong to the genus Ictalurus. But flatheads differ so much in their physical characteristics, they have been placed in the genus Pylodictis, to which no other fish belongs. They’re special, and that’s one reason there’s no freshwater fish I’d rather catch. Here are some other reasons why.

Certainly, one reason I’m fond of flatheads is their often-immense size. Ten, 20, even 30-pounders are common, and in prime waters, 50-pounders hardly rate a second glance.

The all-tackle world-record from Kansas’ Elk City Reservoir stands at 123 pounds, but flatheads over 139 pounds have been caught on commercial tackle in recent decades, and many savvy anglers believe a new world record could be caught in the near future. In the fresh waters of North America, flatheads are exceeded in size only by paddlefish, blue cats, white sturgeons and alligator gars.

Of the 36 states that list state records for flatheads, 22 show benchmark weights that exceed 70 pounds, and six of those surpassed 90: Kansas (the world-record 123 pounder), Missouri (100), Nebraska (100.5), Texas (98.5), Kentucky (97) and Louisiana (95). When I fish for these brutes, I always use sturdy, top-quality tackle because I know the next fish I hook could be a monster. That fact keeps me on my toes and adds an extra measure of excitement to every outing.

Flatheads swim in waters throughout most of the U.S.

Another reason flatheads are on my most-wanted fish list is the fact they are so widespread and abundant. I can fish for them during my travels in most of the country and expect a good chance of succeeding.

You won’t find flatheads in Alaska or Hawaii. They’re also absent from Montana, Utah and most New England states. There are great opportunities for catching them throughout their native range, though, which encompasses waters from Minnesota south into Alabama, Texas and Mexico, and east to Pennsylvania, Virginia, North Carolina and Georgia. Flatheads also have been introduced in many waters from the Great Plains to Washington, Oregon, Idaho, California and Arizona. They offer some of America’s best opportunities for catching a 50-pound-plus fish.

Flatheads don’t fight like normal fish. They’re unpredictable, musclebound brutes that brawl with matchless ferocity and stamina. When one takes your bait, you may think you’ve snagged a log. Set the hook, and it will turn into a clone of Mike Tyson reducing an underling to a spot of grease on the canvas. The unprepared angler may see his rod snapped like a strand of dry spaghetti or stand in amazement after his favorite fishing combo has been yanked from his hands.

I often tell people that the biggest flatheads I’ve seen—50- to 80-pounders—reminded me of sumo wrestlers. They were bizarrely obese, with enormous pot bellies. Thin barbels dangled from the corners of cavernous mouths like Fu Manchu mustaches. Beady eyes glared menacingly from barbarous, battle-hardened facades. They gave the distinct impression that anyone foolish enough to mess with them might come away minus an arm or leg.

Giant flatheads are like sumos in other ways, too. They move with fluidity and swiftness that seem contradictory to their corpulence. I once watched a 30-pounder in an aquarium devour a saucer-sized bluegill in a single gulp.

“Never knew what hit him,” another observer proclaimed about the unfortunate sunfish. “Good thing flatheads don’t get big as killer whales. None of us would be safe in the water.”

When I want fish for the dinner table, I often target the 1- to 5-pound flatheads that swim in abundance in many Southeastern waters. Like others who enjoy fishing for them, I find the taste of flatheads superior in flavor to channel cats, blues or bullheads. In fact, I consider them among the best of all food fish—right up there with walleyes and crappie.

I cannot say for sure why flatheads are tastier, but they scavenge much less than their cousins, preferring live foods like sunfish and crawdads to the meals of dead fish or detritus blue and channel cats often devour. Perhaps it is this difference in diet that gives flatheads a sweeter, more flavorful taste. To me, it’s like the difference between a fillet basted in butter during cooking and one that is not. The former titillates the taste buds in ways the latter cannot.

I encourage anglers to catch and release bigger fish and focus on the more abundant smaller flatheads when the catch will be destined for the fryer.

My friend James Patterson of Bartlett, Tenn. has worked as a catfishing guide for decades. He once described the flathead for me in terms that express my own thoughts very well.

“The flathead is the king of big rivers,” he said. “I sometimes hear people call it ‘mud cat,’ but it doesn’t deserve that title like a lowly bullhead. The flathead is a true predator, a sprinter that can run down the fastest fish. It has a monstrous mouth and can swallow a fish a quarter of its size. This fellow can give you one of the best fights of any catfish, and he is by far, the finest table fare of all the cats.

“The flathead has a mystique all its own,” he continued. “And part of that mystique relates to the difficulty of catching it. Even in waters where flatheads are common, locating trophy-class specimens is not an easy task. The challenge of catching them is another reason I love them.”

I agree in all respects. And if you become a flathead fisherman, I believe you will, too. Here’s hoping Lady Luck blesses you when you try.