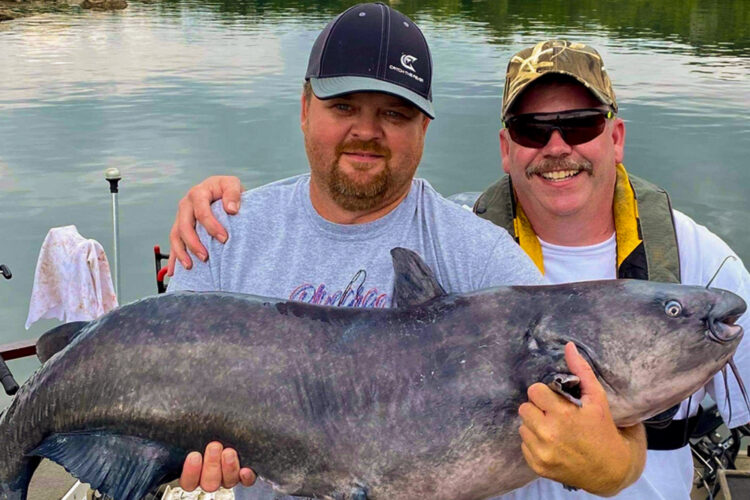 Catching more and bigger blue catfish begins with understanding their behavior and what makes them different from other kinds of catfish. We went to a veteran big cat guide to get those answers.

Mike Mitchell knows blue catfish. A veteran guide on the Tennessee River (Southern Cats Guide Service) and top tournament angler, Mitchell spends a tremendous amount of time pursuing trophy cats on lakes Guntersville, Wheeler, Wilson and Pickwick. He has learned how blues differ from other cats, and, as importantly, how extra-large blues differ in behavior from other cats of the same species. This allows him to effectively target the big blue cats, whether in tournaments or on guide trips, especially during the cooler half of the year.

Mitchell and tournament partner Rick Sexton (Team Southern Cats) won a charity tournament last month on Pickwick with a bag that weighed 150.30 pounds, including a 66.70 pounder that took big-fish honors for the entire tournament.

Blue catfish are big river fish, native to large river systems in the Mississippi River drainage (including the Tennessee River), but with a vastly expanded range that includes many rivers that drain into the Atlantic Ocean and numerous lakes, both large and small, outside their original range. However, blue cats thrive and tend to grow extra large in major rivers and their impoundments, and they typically spend more time in the main bodies of impoundments than up tributary arms.

Mitchell is highly dependent on electronics for finding isolated cover in current, baitfish, and at times big catfish. Today’s electronics sometimes paint a picture of cats that Mitchell knows are the size he seeks and that are obviously feeding based on their orientation to cover or structure and current.

“I primarily use my electronics to locate ledges and structure that hold fish, and marking fish is a bonus, but doesn’t usually dictate whether I fish and area or not,” Mitchell said.

“Some areas produce good fish year after year, but often it takes good electronics and more looking than fishing to really pick out good trophy cat spots. Often you can catch numbers of cats ranging from 20 to 60 pounds together, if the food is abundant, but a big portion of the time, that 60-plus will be out by itself and harder to locate.”

Mitchell generally likes to anchor during the cooler months, targeting the heaviest structure he can find. During the warmer months, fish tend to be more scattered, so he does more drifting.

Conditions vary enormously with water levels on the impoundments of the Tennessee River where Mitchell mostly fishes, so the spots he seeks vary accordingly. When rainfall has been minimal and flows are low, Mitchell focuses on structural features within pinch points, which accelerate current, and on outside bends where the water continues to move well.

“The opposite could be said during flooding,” Mitchell said. “Look for the slower areas, such as eddies, dikes, and inside bends.”

Mitchell is always looking for clues from the river and from the fish themselves and is not hesitant to move or alter his approach when catfish don’t cooperate.

Big blue catfish are movers, Mitchell noted, staying mobile to keep close to food. Defying catfish stereotypes of lying on the bottom in the same big hole all the time, big blue catfish move regularly to stay close to food, and they commonly suspend, especially around current-swept cover, where they can effectively ambush prey.

Blue catfish that congregate on the bottom in slow current and are holding in place tend to be in a resting mode, Mitchell has learned, so he is unlikely to target those fish.

“When they’re triggered to feed, they move miles and can often be found in current 2 to 4 miles per hour, looking for a meal,” Mitchell said.

“They’re really not into the ‘sit around and wait on food’ game,” Mitchell said of big blue catfish.

Along with having a willingness to move, Mitchell noted that it’s important to be willing to mix up approaches. He has caught fish weighing up to 98 pounds in less than 10 feet of water.

“Even on my home lake, often I find fish in places I’ve never fished, and then they’re gone, and that spot may not produce again for months,” Mitchell said. “There are lots of ways to catch fish but if you’re not moving with the fish and just get stuck doing what was working, you will often find that you are not catching fish consistently.”

Mitchell puts a premium on studying the fish and learning from every outing. “Even when they don’t bite, learn something and think what didn’t work and what did. That will help you next time out,” he said.

Because Mitchell mostly targets trophy catfish from fall through spring and has the opportunity to hook into a genuine trophy catfish at any time, he uses heavyweight gear. He uses Big Cat Fever Rods, 40-pound-test Slime Line, 100-pound leader and 7/O to 10/O Boss Kat circle hooks.

Weight used varies dramatically according to the amount of current, the depth and the positioning of the fish. At times he’ll fish with less than an ounce of weight. Other times, he might use as much as a pound.

“Don’t be afraid to have some movement,” Mitchell said. “It doesn’t necessarily have to be locked down on the bottom.”

His bait of choice for blue catfish, more often than not, is cut skipjack, which are large herring that are prevalent in the Tennessee River system.

Remember to be safe, have fun and take care of the river. The river was not given to us by our forefathers, but we are borrowing it from our grandchildren. – Mike Mitchell