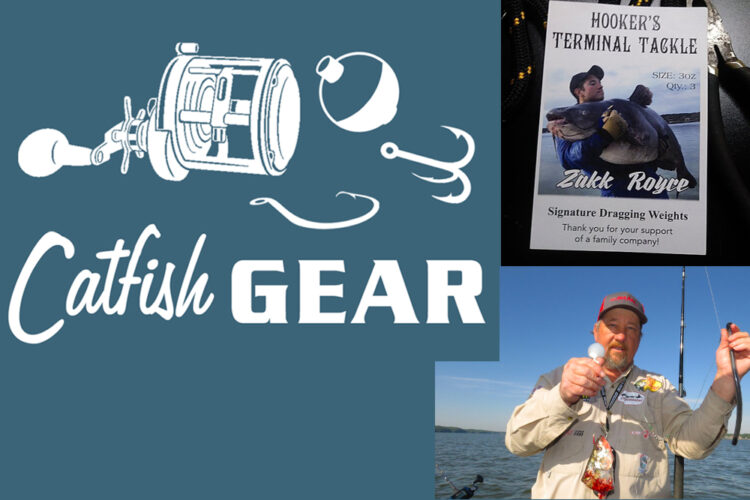 James N. Arwood had a dream of making his own hooks. Beginning with several top selling fish hooks, he began studying them with the idea of making them better. At first, he used his creations himself and later gave some to friends. But the friends kept coming back for more. As demand for his hooks grew, he began selling them retail. This small beginning flourished and is known today as Hookers Terminal Tackle (HTT).

As hook sales increased, he added more products to the HTT line. His success is demonstrated by the numerous anglers who have adopted his products as their choice for all different kinds of fishing, but with a base in catfishing. Often his products are created by consulting with anglers in the field. Two examples are Larry Muse and Zakk Royce. Both have their names on dragging weights, but each for a different type of catfishing.

Muse is cited by many as the first angler to popularize the dragging weight for heavy timber. His testing on Wilson Lake in Alabama proved how effective his design could be when dragging through the submerged timber.

Royce is known for his ability to catch big cats. He worked with James to produce his signature series drifting/dragging weights.

“I experimented a lot with different sinkers,” said Royce. “I found that around here a slinky style weight works best. It allows the rig to go through structure as naturally as possible, which I believe is critical when drift fishing and trolling.”

Regardless of which HTT products you buy, their guarantee cannot be beat. Any product in the HTT line can be returned for any reason if you don’t like them.

Their Return Policy reads like this, “We have the ultimate faith in EVERYTHING we sell. If you have any issues at all with your item, please return it for an exchange. Even if you just change your mind, we are here to serve you!”

Visit the Hooker Terminal Tackle’s website at www.hookersterminaltackle.com to view their full line of catfish gear. Given their 100 percent, no questions asked, money back guarantee, what do you have to lose?

Note: James N. Arwood is the originator of the Catapalooza outdoor expo originally scheduled for June 2020 in Pigeon Forge, TN. The coronavirus epidemic caused postponement. It is rescheduled for May 21-23, 2021. Check them out on their Facebook page.