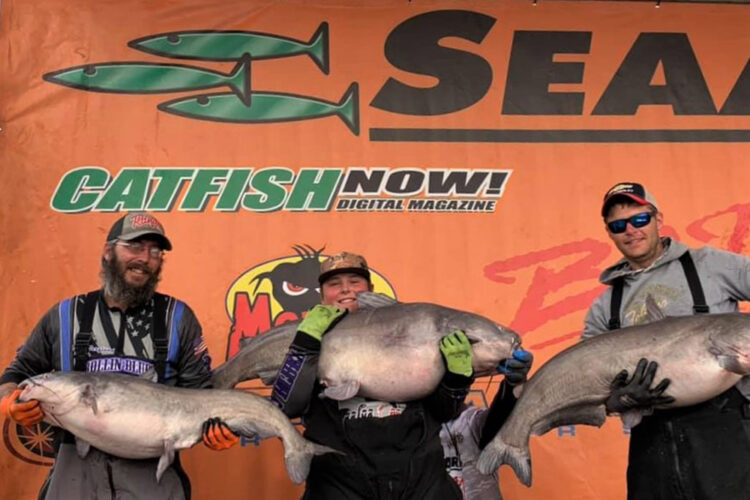 Ryan is shown here at the CatMasters on Tawakoni where he fished with his dad and Eddie Haney. Ryan caught his 64.02-pound personal best on day two. The team finished in the top ten and Ryan earned the Top Finishing Youth Angler.

Look What Happens When Kids Grow Up Catfishing

Ryan’s passion for catfishing developed an awareness and a dedication to catfish conservation.

Thirteen-year-old Ryan Berglund is crazy about catfishing. Like many other catfishing youths, Ryan got started fishing with his dad, John Berglund. They fished mostly for crappie. Then, around 2013 John got into catfishing and Ryan followed in his dad’s footsteps. Ryan is now a well-recognized angler on the catfish tournament trail and he does it for the right reasons.

“Tournament fishing is fun,” explained Ryan. “I like competing against the best anglers and getting the chance to meet and talk with those more experienced than I am. I learn something new and meet a new friend at every tournament. The catfishing community is amazing.”

As any tournament angler knows, traveling from state to state chasing the whiskered critter can be a lot of work. Having done it now for several years, Ryan has experienced a lot of ups and downs that go with the sport.

“Catching fresh bait is my least favorite pre-fishing task,” offered Ryan. “Sometimes it can be really time-consuming. First, finding where the baitfish are, and then throwing a cast net to catch them is hard work. My dad can throw a larger net than I can so I usually drive the boat and he throws the net.”

He looks beyond the needed chore of getting fresh bait to something just as important. Preparation is often the key to a successful outing and Ryan accepts the task readily, doing something he enjoys.

“The thing I like most about getting ready to catfish is tying up rigs,” acknowledged Ryan. “It’s a challenge to figure out what setup the fish will want to bite on. So sometimes I try a couple of different rigs on different poles to see what they like.”

If trophy catfishing is to continue so that other anglers can enjoy the sport, we need youth like Ryan leading the way. While tournament fishing with his dad and talking with other catfish anglers, Ryan has developed a keen awareness of the importance of taking care of the fish.

“Conservation is about preserving the future of catfishing,” asserted Ryan. “To be successful in conservation, the time we keep fish out of the water and fish handling need to be completed efficiently. We must take care of the fish while they are in the boat and get them back into the water quickly. And we must ensure that the fish is as healthy when it goes back into the water as it was when it came out.”

Ryan has made the most of his opportunities when it comes to catfishing. His dedication to conservation has been demonstrated and his place in the catfish community is likely to be just as he desires.

“I would like the catfishing world to think of me as knowledgeable and humble,” concluded Ryan. “If I can impact the catfish world by helping my generation and future generations get interested in catfishing and conservation then I’ve accomplished something.”