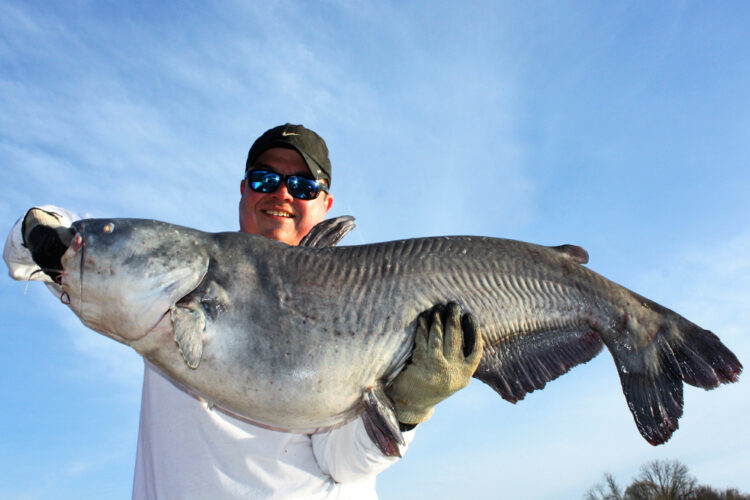 February often means catfish are on the move but with a good strategy, an angler can adapt to changing conditions.

An open mind is critical to success in February. Cold water cats are sometimes found in deep water but other times they are shallow.

Chilly weather is a prime time to target blue catfish, but the changing weather fishing patterns of February typically evolve from the consistent January deep-water pattern.

The 52-year-old Melhorn is a professional catfish guide with a lifetime of catfishing experience, but the last 18-years he’s been laser-focused on understanding how, when, and why patterns change and how to adapt quickly.

“February catfishing can be a double-edged sword,” Melhorn said. “I love fishing February because it’s challenging, but also rewarding. The weather and water conditions can change quickly and dramatically, and the fish bite will trend from deep and slow to shallow and aggressive overnight.”

“My key to success is keeping an open mind on where catfish will be,” he said. “We may catch catfish in 25-feet of water one day, but the next afternoon they may be in three-to-five feet feasting on shad in the back of creeks.”

Melhorn said February is on the ‘backside’ of winter fishing patterns and days are getting longer and warm spells become more frequent. Even a slight upward trend in water temperature can impact catfish forage and following forage is always crucial to finding and catching catfish.

He said early in the month the fishing patterns tend to be deeper but not necessarily the deepest water in the lake.

“I primarily drift fish deep water with the Santee Rig and I’ll find catfish near, but not necessarily in, the deepest channels,” he said. “They’ll often be along the old river channel right along the ledge and across the flats. I’ve found catfish will cluster in general areas but they’re often scattered enough that drift fishing produces best for me.”

Melhorn said productive depths are relative to the lake fished. He cited as a generic example a main river channel that may be 40-feet-deep and the top of the ledge, perhaps 25-feet-deep. He’ll typically begin his search along that 25-foot depth and work across the flat toward shallower water. But productive depths will vary significantly in different lakes because of the type of lake, water clarity, and the overall depth.

To further refine his targets, he’ll study his graph and target any small ditches, creeks, humps, or holes on the flat between the main channel and the shoreline. He’ll drift, or employ his trolling motor to move the boat, and maneuver the baits over these productive targets. He pulls multiple rigs behind the boat and also uses planer boards to increase coverage.

“Even a small change in depth on a flat, such as a two-or-three-foot drop, can make a huge difference and sweeten that specific area for congregating catfish,” he said.

“Overall, slow is the way to go, and I use a simple formula to guide me in cold weather,” he said. “If the water temperature is in the 50-degree range, I’ll drift at 0.5 miles per hour. If the water is lower, in the 40’s, I slow to about 0.4 miles per hour and so forth. I’ve learned you really can’t go too slow, but you can certainly go too fast, to produce a consistent bite.”

“An exciting opportunity that occurs during February is taking advantage of a quick warming trend,” he said. “The right angler response can change productivity from ‘Zero to Hero’ overnight.”

Melhorn said he tracks the weather patterns year-round but it’s crucial during February.

“This can be a magical time because the catfish move into shallow water following forage that’s reacting to the warming trend,” he said. “The forage is attracted to the quickly warmed shallow flats in the back of large coves or creeks and the blues follow and feed aggressively. This burst of shallow-water action is usually short-lived.”

“The forage will flood in almost overnight and the blues, and plenty of big blues, typically follow,” he said.

“I’ll anchor fish in this scenario because the shallow water makes it difficult to drift without spooking fish,” he said. “These fish are here to feed and we’ll hook up pretty quick when I find the right spot. Patience is not your friend in this fishing scenario so if I don’t hook up quickly, I’ll move around until I find the fish.”

Melhorn typically selects bait from the water system he’s fishing such as where he guides on the Catawba River chain in North and South Carolina and at Santee Cooper.

“If gizzard shad and white perch are available, I’ll use those,” he said. “On the Tennessee River system skipjack is a prime bait. Oily fish seem to be really good during cold weather. I also have good success using chunks of chicken breast if natural bait is hard to find.”

Downsizing baits is another tactic Melhorn recommends for February. He’ll typically employ baits of different sizes to begin each trip using baits from large to small sizes until he determines the daily pattern.

Even though February can present some nasty weather conditions, the catfish bite is typically strong when fishing the right pattern.

“Understand that the basic pattern will be deep water but trending shallow as the calendar approaches March,” he said. “Be mobile and adapt to quickly changing conditions and you’ll reap the rewards of February fishing.”

(Note: For more information you can check out Melhorn’s YouTube Channel at Dieter Melhorn Fishing or give him a call at (704-813-3891).