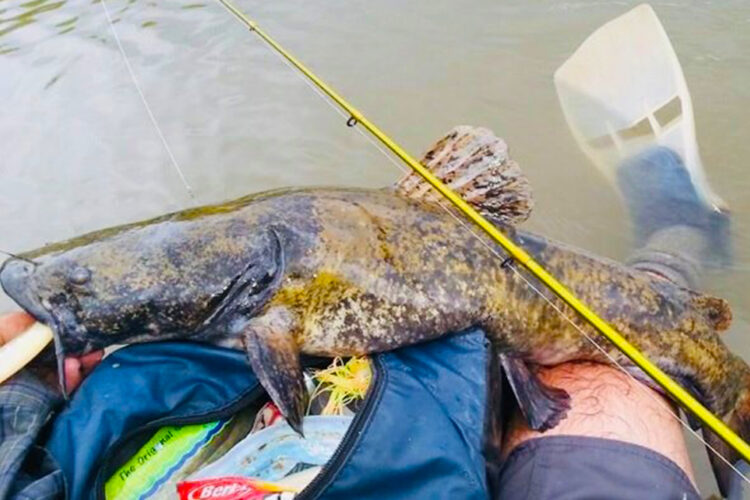 Keith Severns has gained a high level of expertise in float tubing for flatties by spending many hours on Kansas waters. He has a driving need to study flathead behavior and he has accumulated a vast amount of information that he shares on the subject.

He considers a float tube to be the stealthiest method he can think of to hunt down his quarry. He can cruise right over the top of fish or circumvent a log jam without scaring them.

“I have often had fish swim by me and brush against my legs,” recalled Severns. “It’s a bit scary when that happens in the middle of the night, but it’s almost as if I am one of them when I’m on the water.”

Severns loves big soft plastics. He considers them “super-realistic” if worked in a natural manner. He rigs them snag-free on a Texas Rig, trailers on the back of a big, skirted, weedless jig, or behind weedless chatterbaits.

“There are lots of other lure categories and techniques,” explained Severns. “But the soft plastics are my bread and butter. They are the best bet if you are wanting to add artificial lures to your flathead arsenal.”

One of his favorites is the BIGGEST plastic crawdad he can find. A second favorite is the Saltwater Gulp Eel and a good third option is a paddle-tail swimbait or big twister-tailed grubs.

“I experiment with weights to determine fall rates,” Severns offered. “But I usually go with as light a weight as I can get away with. It all depends on current and water depth. The lighter weights give my plastics an appealing SLOW and FLUTTERING downfall and represent a dying creature which is just irresistible to a predator.

Since 9 times out of 10, flatheads will strike the bait on the fall he wants his bait to fall as much as possible. As he slowly cruises along a feeding route, he is usually vertical or close to vertical. He jigs his plastics with sharp upwards sweeps, and then “kills it” to achieve a sweet downward drop on semi-slack line. Basically, it drops straight down.

“Have you felt the thump of a bass on a plastic worm,” asked Severns. “The thump of a flathead is like that times 10. I call it the Super-Thump and it is enthralling to say the least. They smack it so hard, that you can feel it reverberate throughout your arms and into your body!”

“When I run into cover, or something else interesting, or my flathead senses start tingling in an area I will stop and sit for a while” Severns said. “I will work the area thoroughly with short pitches and flutter-falls. I will also pitch or drop directly into cover and slow-hop or crawl the plastic through rocks or wood. Sometimes I’ll even dead-stick it for a minute or two.”

If none of these approaches work, he will try a more horizontal presentation. He swims paddle tail swimbaits or Gulp Eel at different depths, different speeds, and different erratic twitches. If That doesn’t work, he targets active suspended fish by putting a Gulp Eel at different depths under a float. Sometimes he gives the float some erratic pulls, but usually just lets the wind and waves give the action while the float drifts the bait and covers water. When he has exhausted all his soft-plastic methods he ties on a big crankbait or big bucktail musky spinner and try for a different type of reaction bite.

Severns is a firm believer in rattles and scents. He describes a flathead as one of the earths greatest swimming sensory organs. So, he wants his lures to look good, sound good, and smell good. He wants them to put off good water displacement, vibration patterns, and scents that appeal to the fish.

“I am constantly marinating my soft plastics while not in use,” explained Severns. “Once in use on the water, I also have concoctions that I add every 10 to 15 minutes while fishing. Once I’ve added heavy scenting to my technique, my catch rate doubles. I won’t give away everything I know about scents because I am planning on coming out with my own line-up that works.”

“I can afford a boat,” concluded Severns. “But there is just something so special about actually being in the water with the fish in their element. Just remember, there is no magic in fishing. The float tube and artificial lures are just tools to be used to the angler’s advantage. Be patient as you learn, and I think you will enjoy it as much as I do.”

Note: Part 1 of this two-part series can be read in the March 2021 issue of CatfishNOW.  Severns explained in Part 1 why he likes to chase flatheads with artificial bait and his strategies for where and how to fish for them.