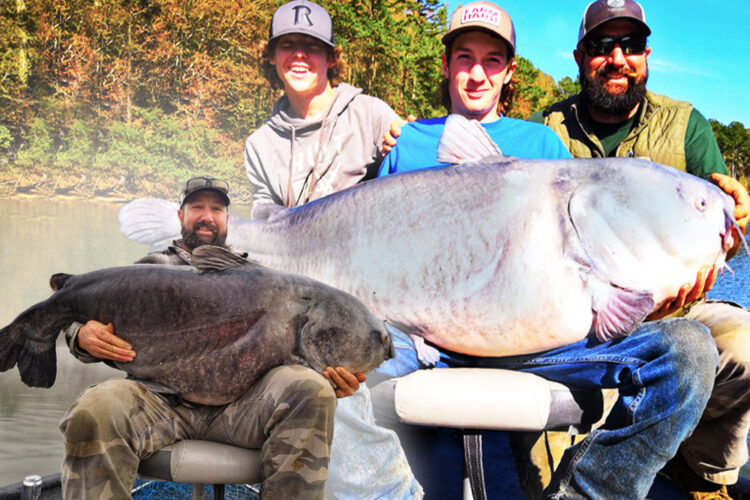 Fishing with professional guide Capt. Ty Konkle in the Tennessee River Gorge, Brain Cabe and his son, Woody, recently EACH caught blue catfish weighing more than 100 pounds in one day. To capture any 100-pound-plus catfish is a once-in-a-lifetime occurrence. To catch two in one day defies all odds. (Photos: Capt. Ty Konkle)

All in a day’s work.

Disregard the “lightning” reference in this headline. This story is NOT about lightning in the electric sense. It IS about two incredible fish catches that occurred in one day recently.

Every hardcore catfisherman in the word dreams of catching a “triple digit fish.” That’s a catfish that weighs 100 pounds or more. There are no real statistics to measure but VERY few catfishermen will ever accomplish that goal in their entire life.

However last week, fishing with professional guide, Capt. Ty Konkle, the Cabe family and a friend from Murphy, North Carolina accomplished that goal TWICE in one day.

It was the very first paid guide trip Brian Cabe and his son, Woody, had ever been on. They were fishing in the 26-mile-long Tennessee River Gorge, a huge gash carved in the Upper Cumberland Plateau by the Tennessee River, just outside Chattanooga. It is the fourth largest such river gorge in the Eastern United States, featuring extremely deep water with water depths reaching 120 feet in places.

“It’s very deep with lots of structure,” said Capt. Konkle. “It’s very hard to fish. A lot of fishermen get frustrated fishing down there.”

“We were literally three minutes into the trip when it hit,” said Konkle. “I knew it was a good fish but when someone else is on the rod you really have no idea how good.”

The father, Brian Cabe, was on the rod.

“Good Lord, what is on the end of this thing,” exclaimed Brian, whose biggest catfish before this weighed 37 pounds.

Konkle said the battle with the monster blue catfish wore on for at least 20 minutes.

“The fish surprisingly kind of stayed put,” said Konkle. “He didn’t go swimming all over the river. He just kept making power dives straight down, stripping drag time after time.”

When huge catfish come up from deep water, they routinely expel air from their swim bladder. Konkle said when he saw the first massive bubbles come to the surface, he knew it was an extremely large fish. When they finally saw it, Brian asked, “Is your net big enough?”

It was, however Konkle said it took two people to lift the fish into the boat. That’s when Brian said, “You know that 37 lb. flathead I caught. That there was a minnow compared to this.”

The huge catfish bottomed out Konkle’s 100-pound scale. A measurement formula used by professional biologists put the weight at 107 pounds.

Obviously, there was a wave of excitement rippling through the boat, followed by an arduous photo session. Then the monster catfish was released back into the river.

“When you catch a big one first thing on a trip you always figure, ‘It’s downhill from here,” said Konkle. “Then, when you go and do it again, it’s just unreal.”

But the group had to pay some dues before then. They fished for eight hours, catching nine more catfish, including a 55-pound blue in the same area of the first huge catfish.

Konkle said they were nearing the end of the trip when he decided to fish “one more spot.” Lo and behold, lightning struck again.

“It was our last drift of day and I put down a huge live bluegill for bait.,” said Konkle. “I had turned away when Woody (Cabe) said, “That bluegill sure can pull awfully good.”

Konkle looked at the rod and realized another fish had taken the bait.

“Sure enough, it was another monster,” he said. “This fish fought entirely different from the first 100-pounder. It ran all over the river. We frequently had to chase after it with the trolling motor.”

With numerous power runs, Woody was wondering if the catfish would be bigger than the one his father caught.

It wasn’t, but was not far from it. This fish just barely bottomed out the 100-pounds scales with measurements bring it in at 102 pounds.

Konkle has been seriously catfishing in Tennessee since 2008. He (or his client) has broken the 100-pound barrier once before.

But he said to catch two in one day is, “Unreal! Especially thinking about the thousands of baits you put down in six different reservoirs. To get two legitimate 100-pounders in one day has to be some sort of a record.”

Konkle and other catfish experts feel certain there is a new state record swimming in Tennessee. It’s just a matter of the right person hooking it, with the right tackle and the right skills to land it.

This story was first published at NewsChannel9.com.