Why We Catfish: A Guest Editorial by Matt “Catmatt” Jones 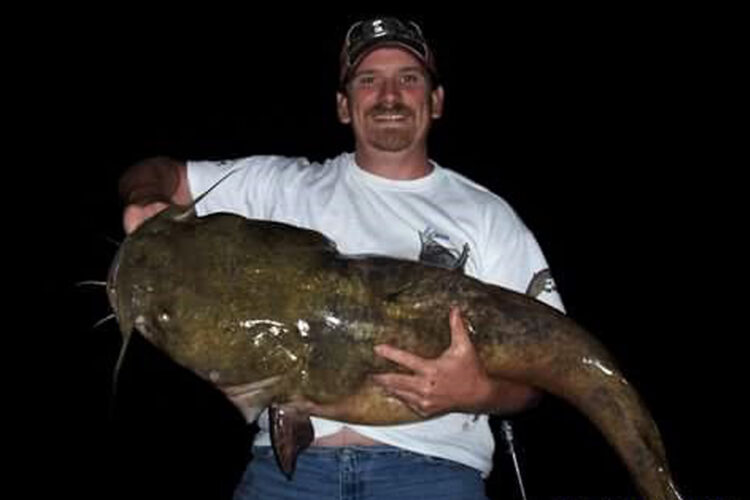 This 77.01-pound flathead is described by Matt “Catmatt” Jones as his greatest individual moment in catfishing.

Catfishing Should be Fun

Back in the “old days” It was simple to answer the question, why we catfish? We could say because it’s fun or because we just flat liked to eat em’. Catfishing has become more complicated today but for me, the answer is the same. Even with all the opportunity catfishing has afforded me it still comes back to the same two reasons, with an emphasis on the fun.

Basically, catfishing began for me as soon as I escaped the womb. As a toddler from the small town of Lincoln, Illinois, fishing was a way of life. Of course, I didn’t get tagged with the “Catmatt” moniker at birth. Lots of things transpire in the 50 years that lead up to that.

Like many of you, I was introduced to catfishing as a pastime by my father. He showed me the whole sport in the early seventies. Hoop nets, throw lines, bank poles, and rod and reel fishing. We did it all and I enjoyed it all. But like many others, the rod and reel really became the bread and butter of the game.

It was when I caught that first channel cat at six years old on that ultra-advanced Zebco 202 that I was hooked. I miss those nights camping on the banks of the old Elkhorn Creek with other river rats.

The nights included rod and reel fishin’, running poles, and consuming more hot dogs than any one human should. Catfish on a stick over the campfire, the smell of Coleman lantern fuel, and cheap Aldi soda were normal smells and flavors of the night.

Minnow seines and minnow buckets were necessities in camp too. And the campfire was always priority one. Those adventures were my roots and my oldest and fondest memories of catfishing.

As the years went by, I knew I wanted catfishing to be my life. I had visions of being a pro like the bass guys on television. I wanted to be admired and I wanted to play to crowds and take the sport to the highest levels.

I remember shooting videos before the internet was a thing and dabbling in the world of local catfish tournaments. This was back in the eighties and nineties, and about the time I started seeing and hearing about a couple of good old boys with the last name of Geary.

The Geary’s, you see, were and are the owners of G&S Cheese Bait. They quickly became my heroes and mentors. Man, they could catch fish and win tournaments with cheese bait.

It was in the late nineties that I was finally able to have a meaningful conversation with Dave Geary. He was the son of the owner. What I respect most about Dave is how simple he keeps things and the success he has coupled with the way he treats people. Sure, I’ve met what some would consider bigger names in the sport but a better fisherman or a better person there are none.

I feel like I have had more opportunities than most in the sport of catfishing. I’ve seen lots of good and bad. I’ve done television, radio, and seminars to teach others about the sport. I’ve guided other anglers. I’ve traveled the country and fished in virtually every situation. I’ve literally done it all when it comes to the sport of catfishing.

But when it comes right down to it, any day on the water just catching some fish for dinner is hard to beat. Don’t get me wrong, I still love chasing monster flatheads, or fishing a tournament, or going to a show and representing my sponsors. But fun is being on the water with some shad or cheese bait. Then catching a lot of fish followed by eating some fresh fried catfish, well that’s just hard to beat.

In the current catfishing environment conservation is important, to me, and catfishing means Selective Harvest. It means handling fish correctly. It means educating people on the importance of taking care of the fish without shaming them. This will be more important as the sport continues to grow. I feel like a large portion of the online catfishing crowd has lost touch with reality.

Catfishing is a confusing scene for new anglers. I constantly field questions from “green” anglers who ask me; Is this rig necessary? Is that rod necessary? Does this bait really work?” I spend a lot of time assuring people that they are doing things just fine.

In the end, I usually tell them that if they are having fun, they must be doing it right. It took me a long time and a lot of experience to realize that at times I forget it myself. The most important part of catfishing and the best reason for doing it is because it is FUN!

Editor’s Note: Matt Jones has had a catfish addiction since he was a child. His hardline approach to fishing earned him a nickname suitable for the love he has for catfishing. Jones used to wade the shallows at night and catch fish by hand. In response to his aggressive approach, a buddy of his tagged him with the nickname, “Catmatt.” The nickname stuck. It became his online username and now everyone knows him as Catmatt.