Why We Catfish: A Guest Editorial by Thomas Whitenton 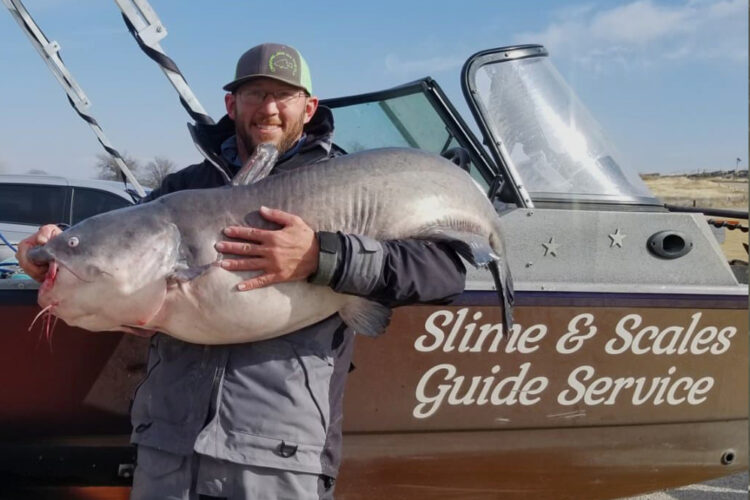 Thomas Whitenton began his career as a welder before taking up part-time guiding. As his fishing skills grew, he became a full-time guide because of his passion for fishing.

How fishing with kids revealed the importance of conservation.

Like many young men raised in the south, I learned fishing from my dad. I grew up with a stock tank right in my backyard. Some of my fondest memories were filling up a nice stringer of channel cats and coming home smelling like god-awful stink bait.

In 2017 I took my hobby of fishing and began to get serious. A friend of mine, my wife, and I went on a chartered fishing trip on Lake Texoma with a guide named Brad Loper. From that moment on I knew what I wanted to do with my life.

I bought my first boat shortly after the guide trip, and so it began. We spent every weekend chasing stripers on Possum Kingdom Lake as well as in the Brazos River below the Shepard Morris Dam.

My love for catfish began in 2018 when a friend and fellow angler Jimmy Gilbert reached out and ask me to fish a catfish tournament. This tournament had a striper Calcutta and I figured that I could learn a little more about these whiskered fish and win a little money chasing striper. We ended up winning the Calcutta and I began my obsession with catfishing.

Shortly after participating in the tournament with Jimmy, I had the pleasure of meeting two individuals who unknowingly shaped my career in catfishing.

I struck up a conversation with Justin Smith, a local angler who was kind enough to invite me out and teach me the basics of targeting catfish, specifically flatheads. In the following week, I was able to take what he taught me and put a 25-pound flathead in the boat one evening. It was all downhill from there.

I met another angler in Abilene named DJ Bradshaw, a phenomenal catfisherman. He taught me the ins and outs of chasing blue catfish and we went on to win three catfish tournaments that year. From that point on I really started to work on my knowledge and my guiding career.

Getting serious, I sold my old boat and threw all my chips in to purchase a 2017 G3 Sportsman 200. Slowly but surely, I started to upgrade the equipment on the boat. I also invested a lot of time on the water, as I was begging to get better at catching catfish.

At the time I was a full-time welder, part-time guide, with a wife who was working full time and going to school. Although it was tough, it allowed me to spend most of my free time fishing with my kids and fine tuning my skills as a guide.

I’ll share one of my most memorable moments before I finish up. In January 2020, my daughter and I fished the Lake Texoma Catmaster event. Lyla was 7 years old at the time. We fished hard for 4 days in freezing weather conditions that included rain, and sleet. She didn’t complain and didn’t want to throw in the towel. She wanted to keep on fishing. At that moment I realized that I’d raised the best partner I could ask for.

For about a year now, I am a full-time guide (Slime & Scales Guide Service). Being a guide, I feel that I get to take everything I’ve learned over the years and pass it forward to others. That’s why I do what I do. I get to see most people’s personal best. I get to see them explode in excitement at holding their first trophy catfish. I see the fire in their eyes ignite when they watch that fish swim away. Although I do the same thing every day, it’s new every time…that’s why I catfish.