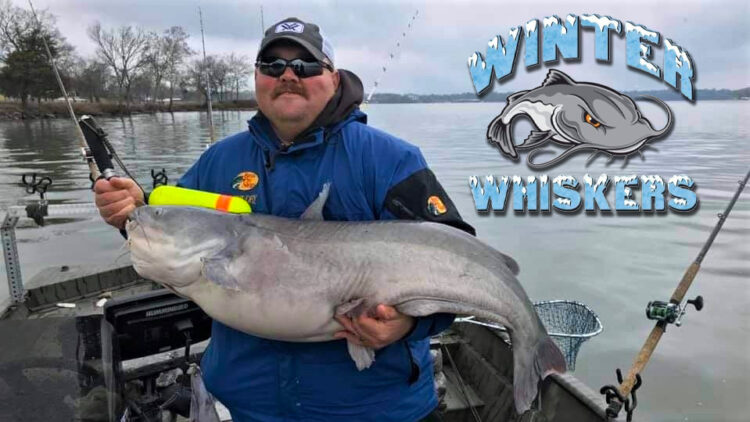 With few catfish tournaments close to his home, Dalton Driver started planning a new one in 2019. His idea was to produce a quality tournament in his local area that was affordable to any catfish angler that might be interested in competitive fishing.

“The only catfish tournament close to my home was expensive to enter,” offered Driver. “I wanted to start a tournament that was big for my local area, but reasonably priced so anyone could afford to enter. That is the main reason I started Winter Whiskers.”

Driver is a competitive person and he loves challenging others to be the best that they can be. He wanted Winter Whiskers to be a good competitive tournament that would challenge people to succeed on the water.

“Believe me Old Hickory can be a very challenging lake,” added Driver. “At the same time, the lake, aka Old Stickory, can be a very rewarding lake.”

Driver developed a plan to raise some guaranteed money and prizes. His efforts were successful and 25 boats registered for the first Winter Whiskers in 2020.

“I wanted door prizes too,” said Driver. “So if an angler had a bad day fishing they would still have a chance to take home a great prize. We had 25 boats that year and everyone had a blast. The first-place team came in with 105 pounds in the 3-fish limit tournament. Everyone wanted to do it again so we planned for number two.”

The 2021 Winter Whiskers came around and 37 teams entered. The prizes were doubled and there was a guaranteed $1,000 for first place. With that successful tournament in the books, Driver has decided to pass the reins forward so he can enjoy fishing the event instead of hosting it. Seth Hedrick has accepted the challenge of directing and is making plans for the third annual Winter Whiskers, scheduled for February 19, 2022.

Hedrick accepted the task willingly and hopes to infuse the tournament with some of his own ideas and philosophies. Basically, he wants to build on the success of the past while adding some attractive amenities to bring people to his area of Tennessee to fish competitively.

“My inspiration for taking over the event is simple,” declared Hedrick. “I want to have an event that people want to come back to. There’s nothing like smiles, laughter, and pure genuine friendship when friends and family come together to have a great time. I would like to accomplish that while supporting a sport we all believe in and want to continue to grow.”

Hedrick looks to the Rising Sun tournament as a model because of how he felt as an angler competing there.

“There is just something about the give back to the anglers at Rising Sun,” said Hedrick. “It is like payback for representing the community. Everything from the breakfast sandwiches on hamburger buns to the way they handle the fish at weigh-in. It just screamed out to me, that if I wanted to host an event that people look forward to, this is what it should look like.”

Hendrick wants to share that pure joy of time spent together in a competition where someone will earn bragging rights. He wants Winter Whiskers to be an event that will bring his community together in a way that will make a difference in a positive way. His goal is to make Winter Whiskers one of the largest annual events in the catfishing world.

“I want to grow catfishing into something more than just us anglers fishing,” suggested Hedrick.  “I want the excitement we feel when we catch these beautiful fish to transfer to the community and be a symbol of unity.”

“I hope the event will reach out into the community,” continued Hedrick. “Whether it be supporting regulations, charities, or other parts of the community, I want to be positive and make a difference when we can. I want people to be hyped up for weeks and months in anticipation of participating in Winter Whiskers. I want it to be an event that others look at and say—I want my event to be like that!”

Scheduling is important too, and fishing is generally best on Old Hickory in late winter and early spring. Current flow usually becomes pretty stable by that time and fish can be caught all across the lake.

“The February date should be great,” predicted Hedrick. “There will be plenty of patterns from shallow to deep. I think people will be able to put together a good day. I expect we’ll see a lot of really nice fish at weigh-in.”

“Overall, I just want people to come out and have fun,” concluded Hedrick. “I want them to enjoy themselves and join together to grow Winter Whiskers into a national event where people want to travel to middle Tennessee to fish Old Hickory Lake. Not just because of the fishing, but because they know the tournament is for them, made by them, and given back to them.”

For more information and sponsorship opportunities, Hedrick can be contacted through his personal Facebook page, the Winter Whiskers page, or directly by phone at 615-200-3373.