Castin’ and Blastin’ in Kansas 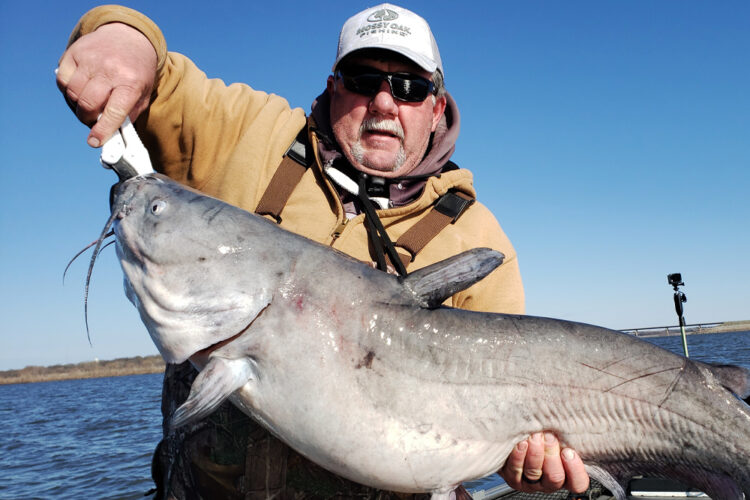 Set the hook or pull the trigger? That’s November in Kansas

The Sunflower State is a sportsman’s paradise during fall.

Cast or blast? That’s the prevailing question for Mark Thompson when he wakes up on a cool November morning.

November is a great month to fish for big blue cats in Kansas. It’s also a great time to follow bird dogs through a frost-covered field in search of bobwhite quail.

Either choice can result in some memorable days on the Great Plains.

“I stay pretty busy in November. It’s one of my favorite months,” said Thompson, 53, who lives in eastern Kansas. “We have some of the best quail hunting in the nation. But the big blue cats can be biting in November, too.

“Sometimes, it’s a hard choice. There are times when I’ll do both in the same three-day weekend.”

Thompson will often let the weather determine his choice. The barometer is the key, he said.

If a cold front is predicted, he will hook up the boat. The low-pressure system often brings overcast skies and wind. That means the catfish usually are more active, prowling for food.

Once that front moves through and high pressure dominates, he often loads up his two German shorthairs, Scout and Bena, into the kennels on his truck and heads for the upland fields. With the bluebird skies, light wind, and cool temperatures, scenting conditions are often ideal for the bird dogs.

The hunting and fishing can be interrelated. Once the Kansas bird season opens the second Saturday of November, many become preoccupied with hitting the fields and forget about fishing. That’s understandable. Kansas has some of the best quail hunting in the nation. And its pheasant hunting, though not what it used to be, also can be respectable.

That can translate to uncrowded reservoirs and rivers and outstanding fishing.

“November is one of my favorite months for blue-cat fishing,” Thompson said. “The fish start packing on the pounds as the water gets cooler.

“They’re less active and they don’t use as much energy to feed. If there’s a good shad population, the blue cats will just lay somewhere and wait for the baitfish to come by.

“If you put it in front of them, they’ll bite.”

In the early part of the month, Thompson looks for days when a low-pressure system blows in and brings wind. He often will troll with cut shad off a main-lake point with deep water nearby.

Later in the month, the blue cats will move to main-lake river channels, ledges, and other drop-offs, which the baitfish use as a travelway.

Thompson likes to slow-troll with planer boards to cover more water. He will concentrate on the middle stretches of reservoirs and follow contour lines on his electronics, and key on bends in the river channel. If that bend makes an S curve, all the better, he said. That gives him a chance to drag his bait from a flat to a channel dropoff twice in a short distance.

Thompson often baits his hooks with cut shad, but he also has found success with cut carp that he has bottled.

“A lot of people will tell you that you can’t catch blue cats on shad sides (in a jar), but they’re wrong,” he said. “I make my own jarred baits out of common carp, Asian carp, and buffalo, and I’ve caught some big blue cats on those fermented baits.”

Contrary to what some fishermen might think, the big blue cats will bite in the cold water. He has caught trophy fish when the water temperatures drop from the 50s into the 40s. When it falls into the low 40s, he will often abandon trolling and anchor near a bend in a river channel.

One thing is certain: Kansas has plenty of blue cats to take the bait.

Thompson’s favorite reservoir is Milford, which has been stocked by the Kansas Department of Wildlife and Parks since the early 1990s. Though Milford appears to be past its peak, it still has 50- to 70-pound fish, Thompson said.

Perry and Clinton have developing populations, with not as many large fish. Still, Thompson said, “You still have a chance of catching a fish over 35 pounds.”

The best chances of catching a giant in Kansas, though, may be in the state’s rivers.  Thompson caught his biggest Sunflower State blue catfish on the Kansas side of the Missouri River, near Leavenworth. That fish weighed 85 pounds. He landed a fish just one pound lighter on the Kansas River near Lawrence.

Thompson fishes the reservoirs until they freeze over. Then he will move on to Coffey County Lake, a hot-water cooling lake for Wolf Creek Generating Station. There, hot-water discharges keep the water open and often to the liking of the blue cats.

Milford, Glen Elder, and Wilson offer the best cast and blast opportunities. Each of those reservoirs have building blue-cat populations and good numbers of quail nearby.

“For those of us who like to fish and hunt, November can get busy,” Thompson said. “I usually take vacation time in late November.

“But even when I’m working, I’ll have three-day weekends. Some years, I’ll hunt for two days, then come home and hook up the boat so that I can go out Sunday.”