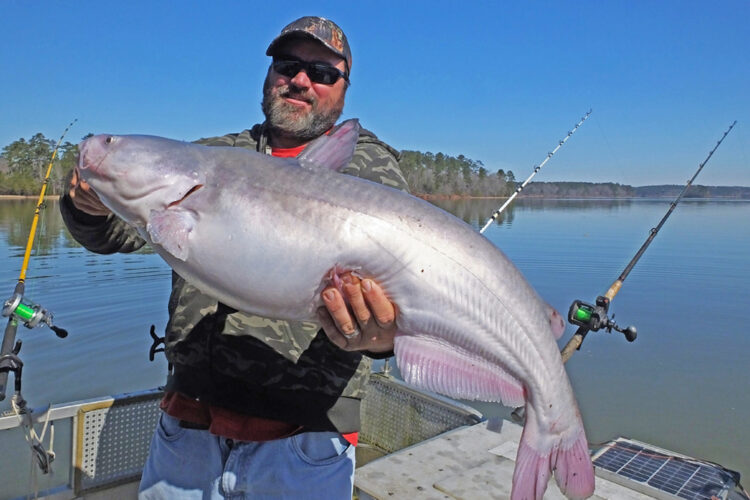 Chris Simpson said the population of blue catfish is in the boom stage at Clarks Hill Lake.

Situated on the South Carolina and Georgia border on the Savannah River, Clarks Hill Lake is an often-overlooked catfish hotspot.

Revered by striper, hybrid, and crappie anglers for fishing productivity, this 71,000-acre Corps of Engineers lake is also known as Strom Thurmond Lake in South Carolina. It’s the third-largest artificial lake east of the Mississippi River, trailing only Kentucky Lake and Lake Marion in size.

“I have everything I want in terms of catfishing in one place right here,” Simpson said. “The diversity of water and habitat is amazing and it sets up great fishing opportunities year-round. Blue catfish are abundant but I can target channels and flatheads at certain times of the year.  I’ve guided for catfish on multiple lakes but this lake has it all.”

Simpson (864-992-2352) said his primary target for year-round fishing is blue catfish, both in terms of quality and quantity of fish.

“The population of blue catfish is exploding right now at Clarks Hill Lake,” he said. “Blues have been here a long time but for the past 10-years the number and size of blue catfish have expanded exponentially.”

Simpson said like any lake, Clarks Hill has peak times for optimum fishing. Big blues fish are caught year-round but late fall and winter are prime time as well as a pre-spawn period in March and April.

“November and December are very dependable for trophy fish and on one three-day stretch last year in December 2020 we had a 60-pounder the first day, a 55-pounder the second and topped those with a 65-pounder the following day,” he said. “Plus, we had plenty of other quality fish. Catching big catfish here is not a fluke occurrence.”

The depth pattern in late-fall and early winter generally trend toward deeper water. They move to the major tributaries and along the Savannah River channel and catfish are often in the 30-to-40-foot depth range and during the dead of winter often deeper.

During spring these patterns trend back to shallower water for a several-week at a time.

“We’ll have some excellent fishing in shallower water beginning about the third week of March and into April in the back of creeks and coves on the top of shelves, points and humps,” he said. “We’re often catching big blues in 3-to-20-feet of water.

“During late-spring and summer they’ll trend deeper again but by fishing at night we’ll still find plenty of fish in reasonably shallow water,” he said.

Simpson said records of his catches indicate the top end potential of the blues is growing steadily. Four years ago, the realistic top-end potential for a big catfish on a trip was in the 40-pound class, but now that mark has graduated to the 50-pound class.

“I don’t think Clarks Hill has reached full potential with blue catfish,” he said. “We’ve got an excellent distribution of age classes, abundant forage, and plenty of water. I think the fishing is still improving.”

Unlike the pattern on many lakes drift fishing is not the universal best tactic on Clarks Hill.

“It’s not that the drifting technique doesn’t work, it’s the habitat that dictates strategy here,” he said. “A lot of underwater debris exists that’s very snaggy, so areas for long controlled drifts must be located using maps and graphs. I strongly recommend doing that prior to beginning to fish.”

“In the upper half of the lake I’ve found several areas along creek or river channels ledges, and around some flats, where I can have reasonably long drifts that are highly effective,” he said. “But it took some time scanning the bottom to locate them.”

Simpson has long been an advocate of anchor fishing for big catfish and he’s found that to be highly effective here. He targets small, specific areas where catfish congregate such as humps, points and drops.

“The graph is my best friend when searching for places to set up for anchor-fishing,” he said.

Fishing is good lake wide but Simpson prefers the upper half of the lake.

“The water depths and water color seem more conducive to my fishing style in the upper half of the lake,” he said. “The lower end can get really clear but occasionally rain events will produce improved water color and plenty of big catfish are in the lower end.”

Simpson said his bait of choice for blues is typical of most lakes, with cut bait from the primary forage species his primary choice. Gizzard shad and white perch rank high and cut bream is excellent during warm weather.

Blue catfish are not the only species he targets. Simpson said the flathead population is good enough he’ll target those at specific times of the year.

“During the spring and summer, and again in the October time frame, I’ll target flatheads,” he said. “Live bait is my go-to bait and big flatheads are caught around rocky areas near or in deeper water. We’ve caught flatheads over 60-pounds and the largest I’ve seen is 77-pounds, so we’ve got big flatties here.”

“We’ve got a big population of chunky channel catfish and they’ll stack up on the points and humps off of the main Savannah River channel, as well as in the larger tributaries,” he said.

Simpson said stink baits are prime offerings for this fishing and his list of favorites include Doc’s Catfish Getter Dip Bait, as well as small chunks of cut bait and nightcrawlers.