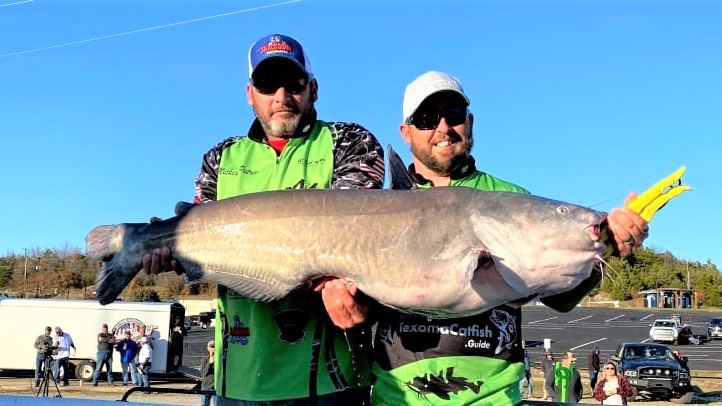 Petree and Armstrong Win
The CatMasters at Lake Texoma

Hosted by the Tanglewood Resort, 177 anglers representing 77 teams from several different states traveled to Lake Texoma to compete in the CatMasters event. As one of the largest reservoirs in the US, anglers had plenty of water to probe.

The tournament was part of the ACA Tournament Alliance so competing anglers earned an opportunity to win a 2021 SeaArk Protégé boat, powered by a 200 hp Suzuki Engine, on a Deluxe Marine Master trailer.

The CatMasters at Texoma allowed 3 fish per boat (now known as a “humdinger”) weighed in each of the two tournament fishing days. Anglers were limited to 2 fish over 30 inches and 1 under 30 inches.

In the interest of fish care, a mandatory livewell rule required anglers to have either a single 50-gallon livewell or two 40 gallon livewells with adequate aeration and capable of fresh water recirculation. The result is a weigh-in characterized by healthy fish and a lot of tail-slapped anglers.

Day one began with chilly temperatures in the high 30s before rising to the mid-60s at weigh-in time. Skies were sunny with winds blowing from NNW at 10 to 20 mph gusting to 25.

In a continuing effort to innovate in support of the catfish community, Jesse Swanson,  Pete Peeva Productions and Manager of Audio/Video Operations for the CatMasters, used the SpaceX Starlink satellite internet connection to broadcast the weigh-in. This link allows broadcasting from rural areas with weak or no internet signals and gives viewers a chance to see what a catfish tournament is all about.

Team Baldwin (Chris, Kyli, and Kamber Baldwin) weighed 89.14 pounds to take the day one lead. Following close behind in the runner-up spot was Team Catch the Fever (Trey Franklin, Ashleigh Jordan, and Asa May) with a total weight of 86.27 pounds. Big Fish on day one went to Team Mega Cat (Mick Petree and Daniel Armstrong) with a 64.16 pound blue in a bag that weighed 80.61 pounds. They were holding down 3rd place after one day of fishing.

Competing anglers brought 1,902 pounds to The CatMasters’ scales on day one. Many anglers remained in striking distance of the lead making day two a shoot-out for the top spot on Texoma.

Day two was similar to day one except for the wind. It started under a freeze warning but finished under much calmer conditions. Mostly sunny skies and a high temperature of 62 degrees made for a relatively pleasant day of fishing. The wind switch to SW and calmed down to 5 to 10 mph. 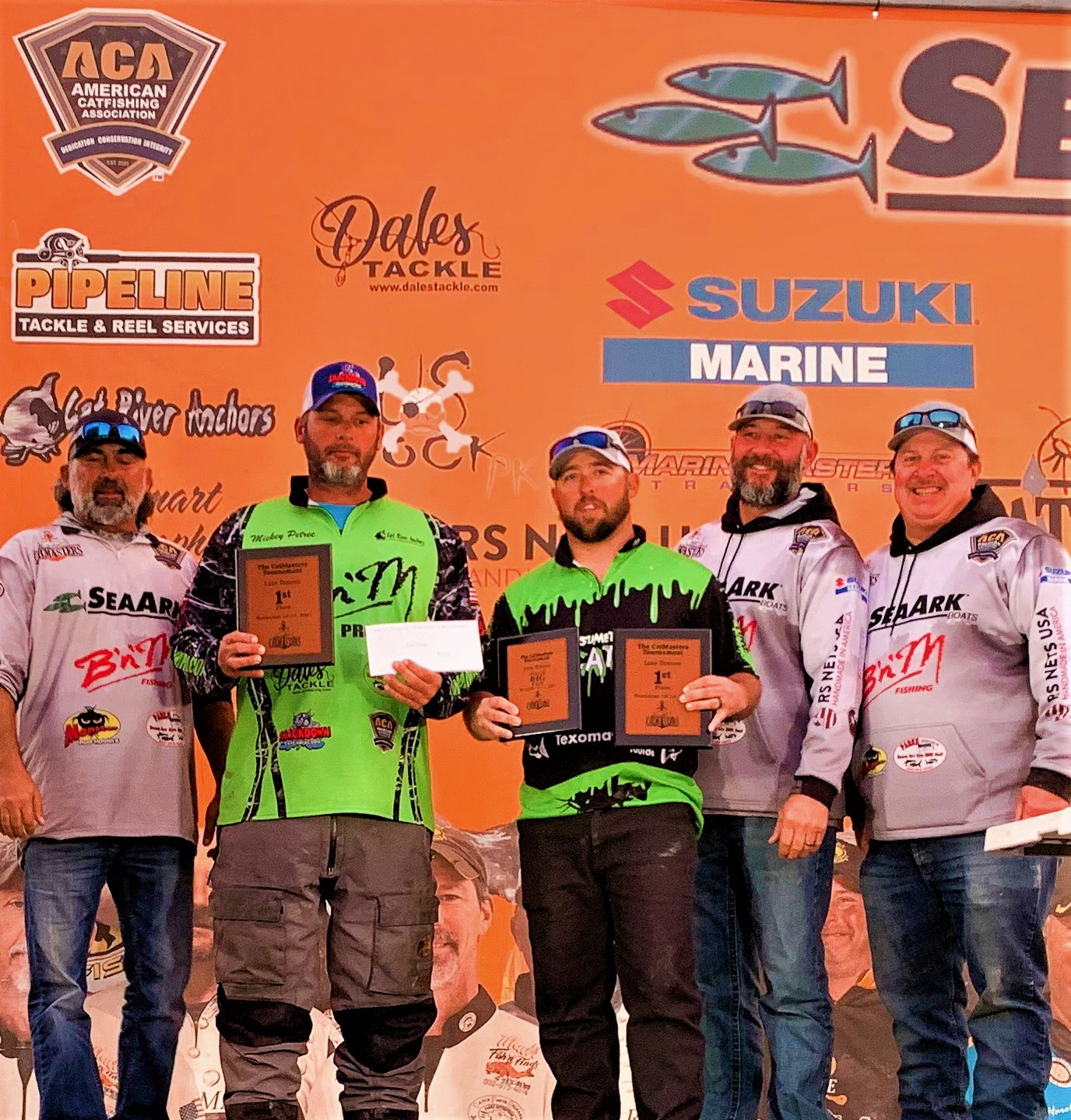 After 3 years of trying on his home lake of Texoma, Mick Petree claimed the top spot at The CatMasters tournament. He teamed up with his son, Daniel Armstrong to bring a 2-day total weight of 165.77 pounds to the scales and earn the first-place check.

Amazingly, the father/son team also won Big Fish each day of the two-day tournament which most anglers described as a tough bite. They took the Day 1 Big Fish prize of $1,000 with a 64.16-pound blue and then added another $1,000 for the Day 2 Big Fish with a 63 pound plus brute. Since the Day 1 Big Fish was also the Overall Big Fish they earned another $500 from the CatMasters and $300 from Livingston Lures.

“We fished about mid-lake,” reported Petree. “We were focused on depths from 30-40 feet and 50-60 feet. The fish were really scattered so we found the depths with the most fish and just covered ground pulling Parks Planer Boards.”

With the finicky and scattered fish, the team had to make some adjustments to bait sizes, leader lengths, and speed of the boat.

“The fish didn’t want to settle in and commit to a good bite,” explained Petree. “So in addition to slowing down and changing leader lengths, we kept downsizing the bait.

Both big fish, which were caught more than a mile apart, came on chunks about the size of a half-dollar.

“We used striper, buffalo, and shad for bait,” said Petree. “I love buffalo and both of the big fish came on small chunks of buffalo.”

“I would like to thank B’n’M Poles, all my sponsors, and the good Lord above,” concluded Petree. 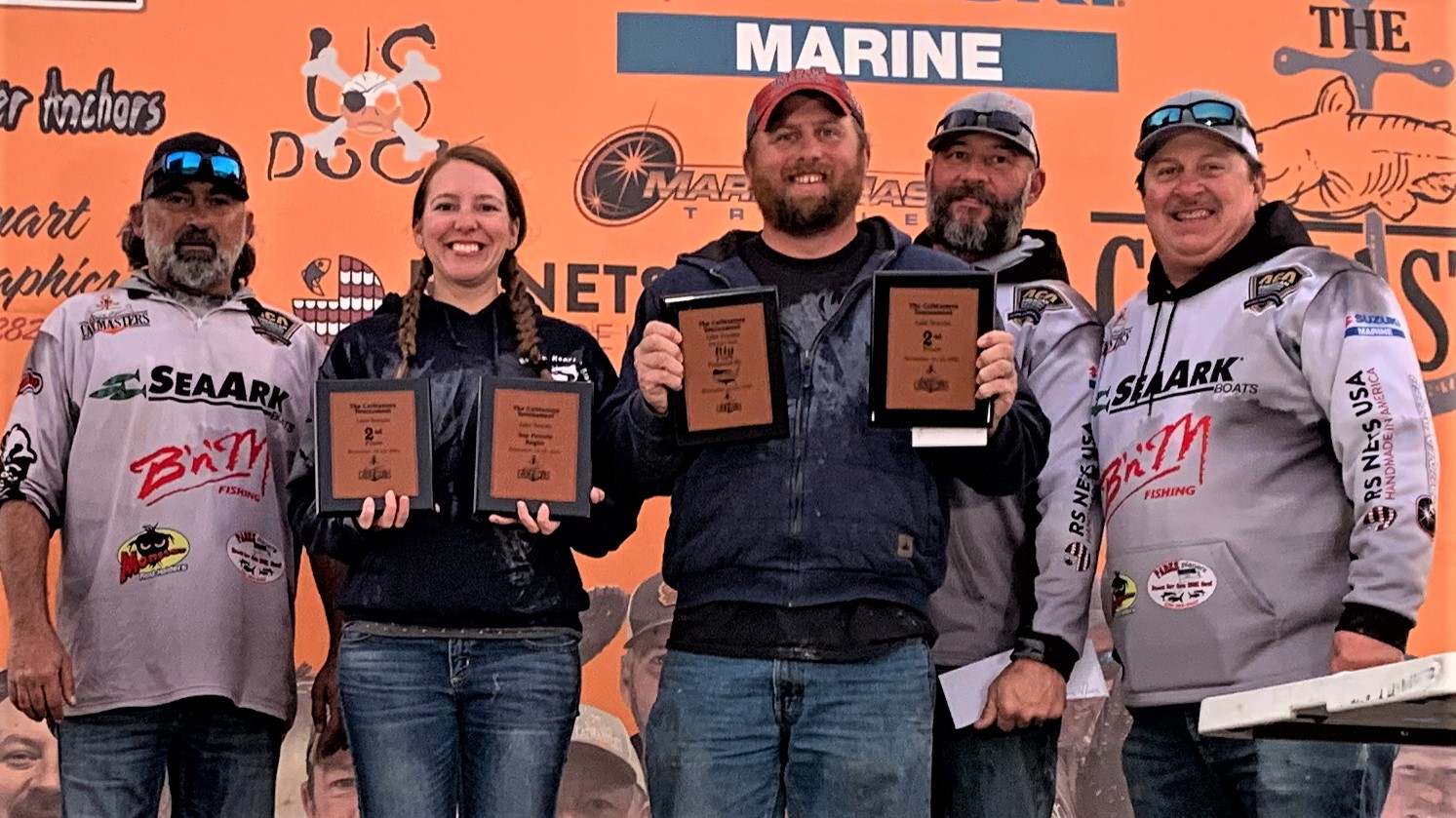 The runner-up spot went to Eric and Jordan Horton. The husband/wife team brought 144.04 pounds to the scales to earn the second-place spot.

Eric and Jordan had developed a good pattern during prefishing in shallow water. They were dragging fresh-cut bait with good success.

“The first day of the tournament our shallow water pattern dried up,” reported Jordan. “We wasted 5 hours trying to make it work. We saw fish on the graph but couldn’t get them to bite. After those 5 hours, we made a change and move to 25-30 feet of water.”

After the wind kicked up they noticed on the sonar that the fish were relating to the bottom so they adjusted by shortening their hook leaders. The altered leaders seem to work and they started catching some fish. The team did not have a lot of fishing time left on day 1, but they had established a new pattern.

“When we were coming back to the dock at the end of day 1, Eric misjudged the distance to the dock and took a spill into the lake,” joked Jordan. “He donated his phone to the cause.”

“Day 2 was colder in the morning,” recalled phoneless Eric. “So we figured the fish would stay in the deeper water. We set up our drift on a mudflat. With very little wind, we were able to run that same drift for the whole 8-hour day. We never had to lift the trolling motor and reset. We caught a bunch of fish, 7 of which went over 30 pounds.”

The bite was good and at one point Team Horton had zero out of our five rods in the water. Given the good luck on day 2, Eric and Jordan were hoping their 100 pound plus bag would move them from their 16th place finish on day 1 to a more respectable finish.

“We were hoping that we’d fished well enough to move into the money,” offered Jordan. But we didn’t think we would make 5th. We were shocked that our 101 pounds bag moved us into 2nd place.”

“We’d like to thank our friends and families for being so supportive,” concluded Jordan. “And our family members who spoil our little girl when we go out of town. We’d also like to thank Mid-Kansas Marine for keeping us fishing when we accidentally break things. They go out of their way to make sure we’re taken care of in time to fish our next tournament. A couple of weeks ago they volunteered to stay late so our boat would be ready in time for our trip to Alabama.” 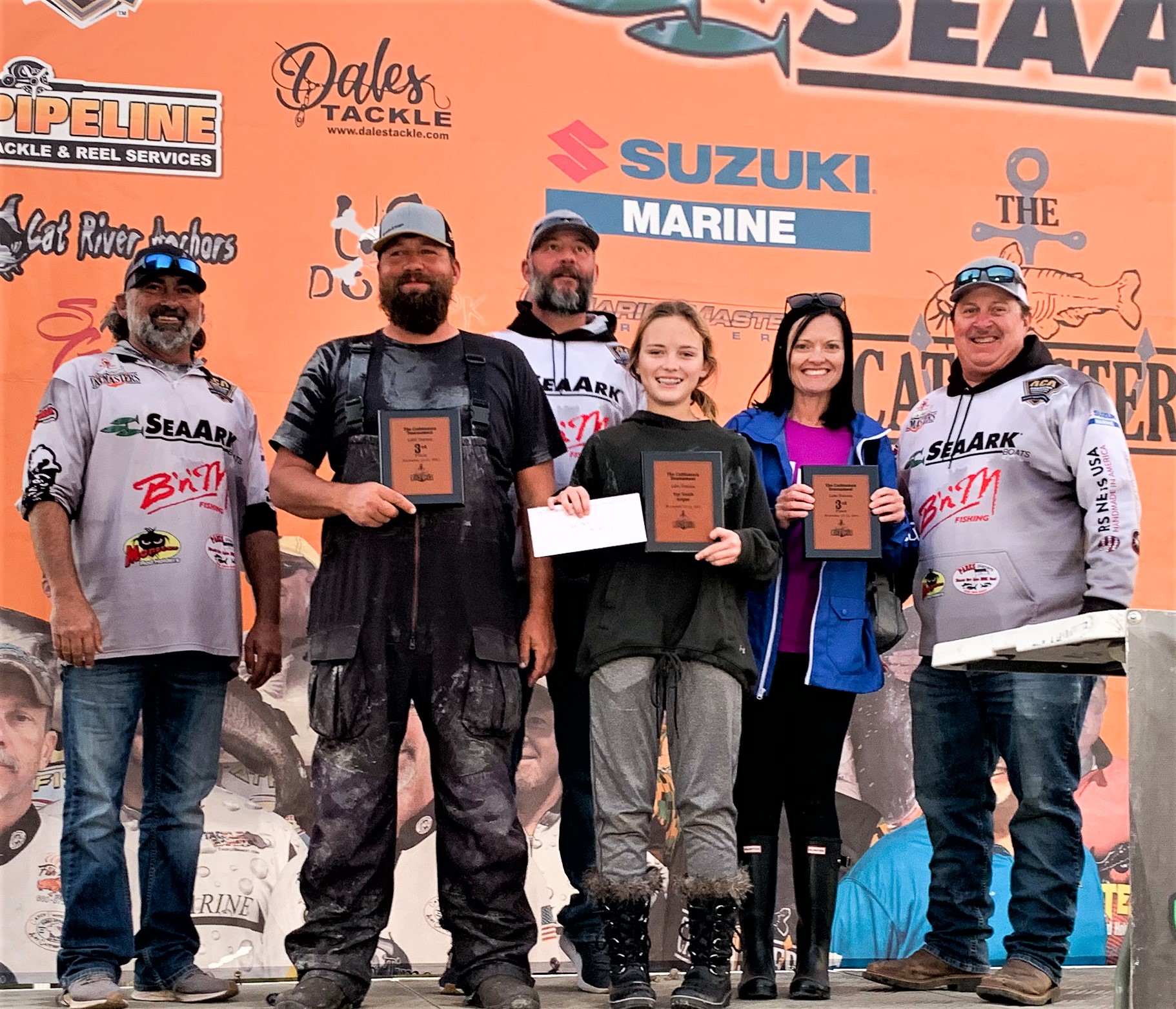 Team Phelps may have had one of the most unusual happenings of the tournament. Their biggest blue cat spewed up 2 egrets in the livewell. That doesn’t help the total weight and makes cleaning the boat a whole different activity. LOL.

“While I’m washing all these feathers out of the boat, I’d like for people to know that my main drive of fishing/guiding is,” stated Jason after returning home. “It is all about seeing the excitement of others. It’s never really been about winning or catching the biggest fish. It’s been about how big of a smile can I get out of the people with me!”

Jason, Summer, and Chloe were fishing about mid-lake where they were drifting a main river channel.

“We were targeting fish in about 65-70 feet of water,” reported Jason. “We were fishing the Oklahoma side using striper for bait. Day 1 was good until about 1 pm when the 25 mph winds hit and shut us down.”

“Day 2 started at 32 degrees,” continued Jason. “But low winds made it tolerable and it was a beautiful day. We ran Spread Em planer boards to cover some ground and catch our fish.”

Chloe earned the Top Finishing Youth Award for the team’s total weight. Her dad would suggest she earned it just by her performance on the boat.

“Chloe is a full-blown deckhand/angler,” declared Jason. “From fighting fish, netting fish, getting the bait out of the cooler, etc. She can handle it all without letting the moment get to her.”

Jason concluded by thanking B’n’M Poles for their support and The CatMasters for running a great tournament. 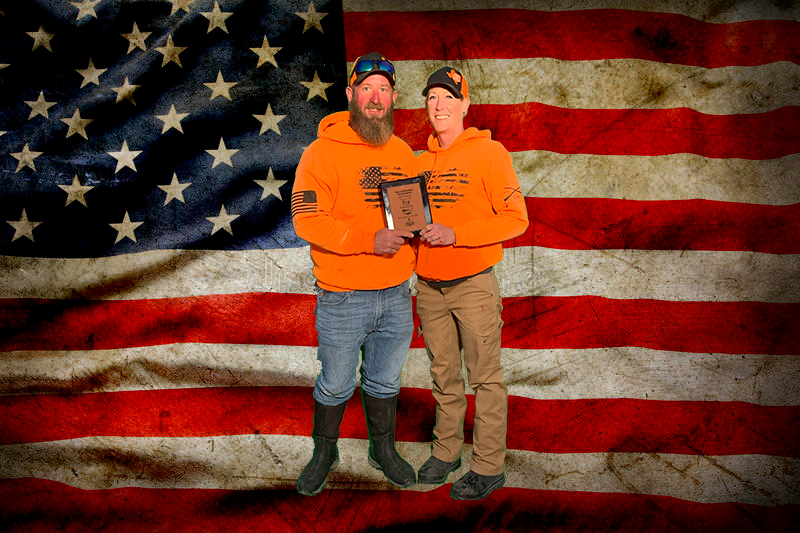 The Top Finishing Veteran award was sponsored by ROCK CREEK, LLC. It is based on the biggest fish caught by a veteran.

The 2021 Top Veteran Angler award of $1,600 went to Tori Lasswell. She was fishing with her husband Brandon when she caught her 52.28-pound blue. Both are veterans but Tori caught the fish. She also received a 2 person spoonbill trip on Grand Lake from No Wake Guide Service in recognition of her catch.

Anglers are their primary focus but lots of work goes into every aspect of their tournaments including the fans and the sponsors. The CatMasters emphasis on fish care is recognized throughout the catfish community as they develop catfish tournaments for the future.

The CatMasters’ Executive Tournament Director, Bryan St Ama, sent special thanks to the Tanglewood Resort for their support of the tournament and to the fans that came out to the weigh-in each day.

The next CatMaster event is scheduled for January 21-22 on Possum Kingdom Lake.

Catfish fans can check out all the statistics from Lake Texoma at American Catfishing Association (ACA) Live Results page by clicking here. For the latest from The CatMasters follow them on Facebook or visit their website.