Bama Blues on Wheeler—How They Fished 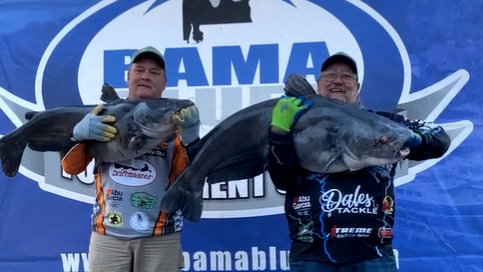 The Tennessee River shows off again with numerous trophy blues in the final event of the Bama Blues Tournament Series.

Twenty-three boats competed in the November 27th, 2021 event out of First Creek Ramp. The tournament was a 3-fish limit with two overs. At the end of the day, the Tennessee River showed once again what a great fishery it is.

The 67,100-acre lake is created by Wheeler Dam and provides catfish anglers about 60 miles of Tennessee River to fish. The northern Alabama lake is known for its huge catfish and it did not disappoint the Bama Blues anglers and spectators at the weigh-in.

The day started off chilly in the mid-20s but doubled during the day to the mid-50s by weigh-in time. The recent cold air temperatures had driven the water temps to about 54 degrees. 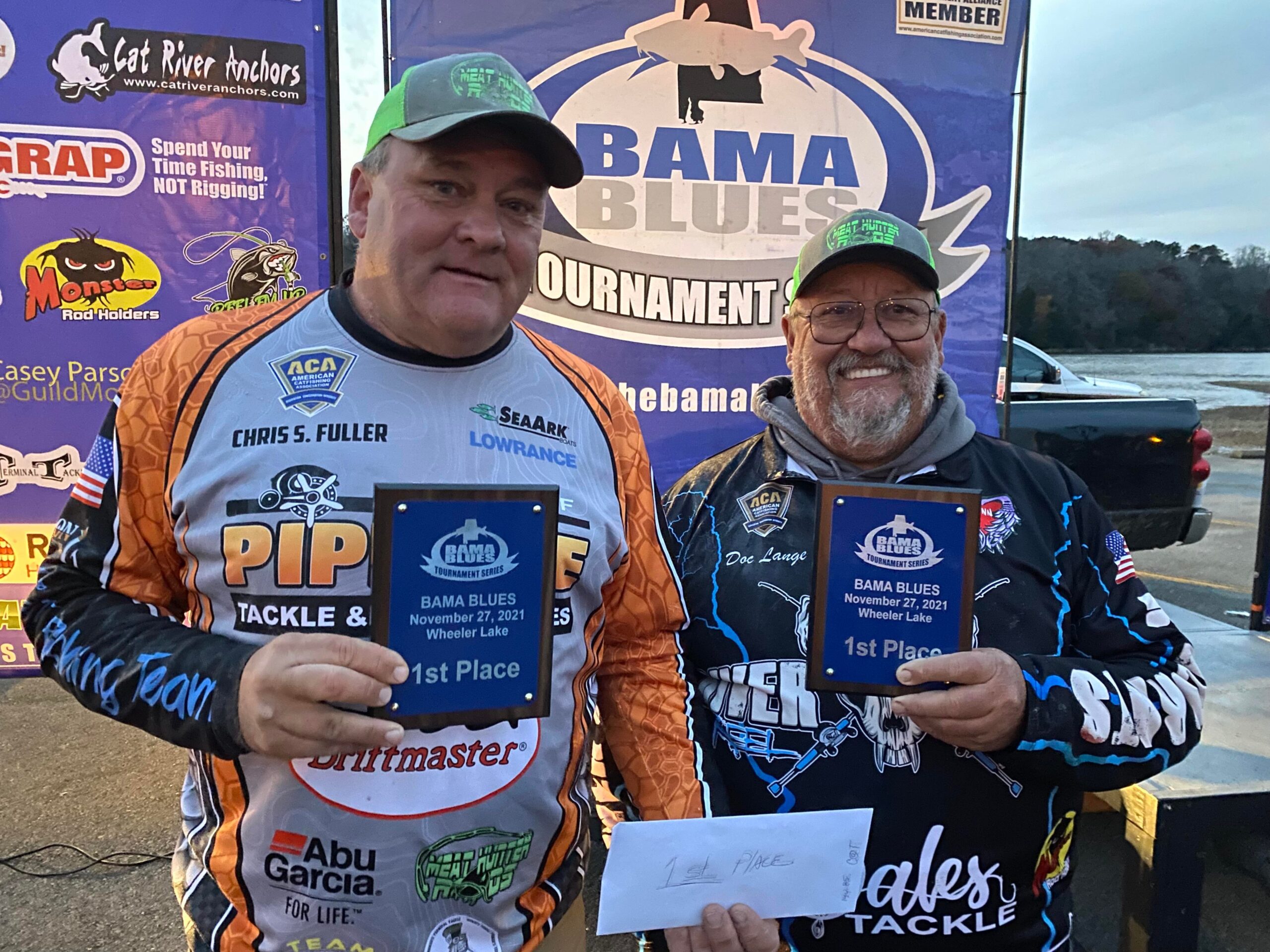 The top spot at Bama Blues went to Doc Lange and Chris Fuller. They teamed up to bring 140.85 pounds to the scales and take the top spot.

Doc is known for having multiple ”offices” on the lake and on this day he decided to trailer and visit one near what he expected to be some good fishing.

“We only fished for four hours,” noted Lange. “We were allowed to trailer so we drove almost 65 miles to where we practiced early in the week.”

The long drive paid off as a strategy, even though they had to give up some fishing time. Lange and Fuller fished on the rope all day long. They were upriver from the weigh-in site at First Creek in water that registered 54.4 degrees on the electronics.

“We anchor fished on ledges all day,” concluded Lange. “We want to thank Meathunter Rods for helping us catch 6 fish on the day.” 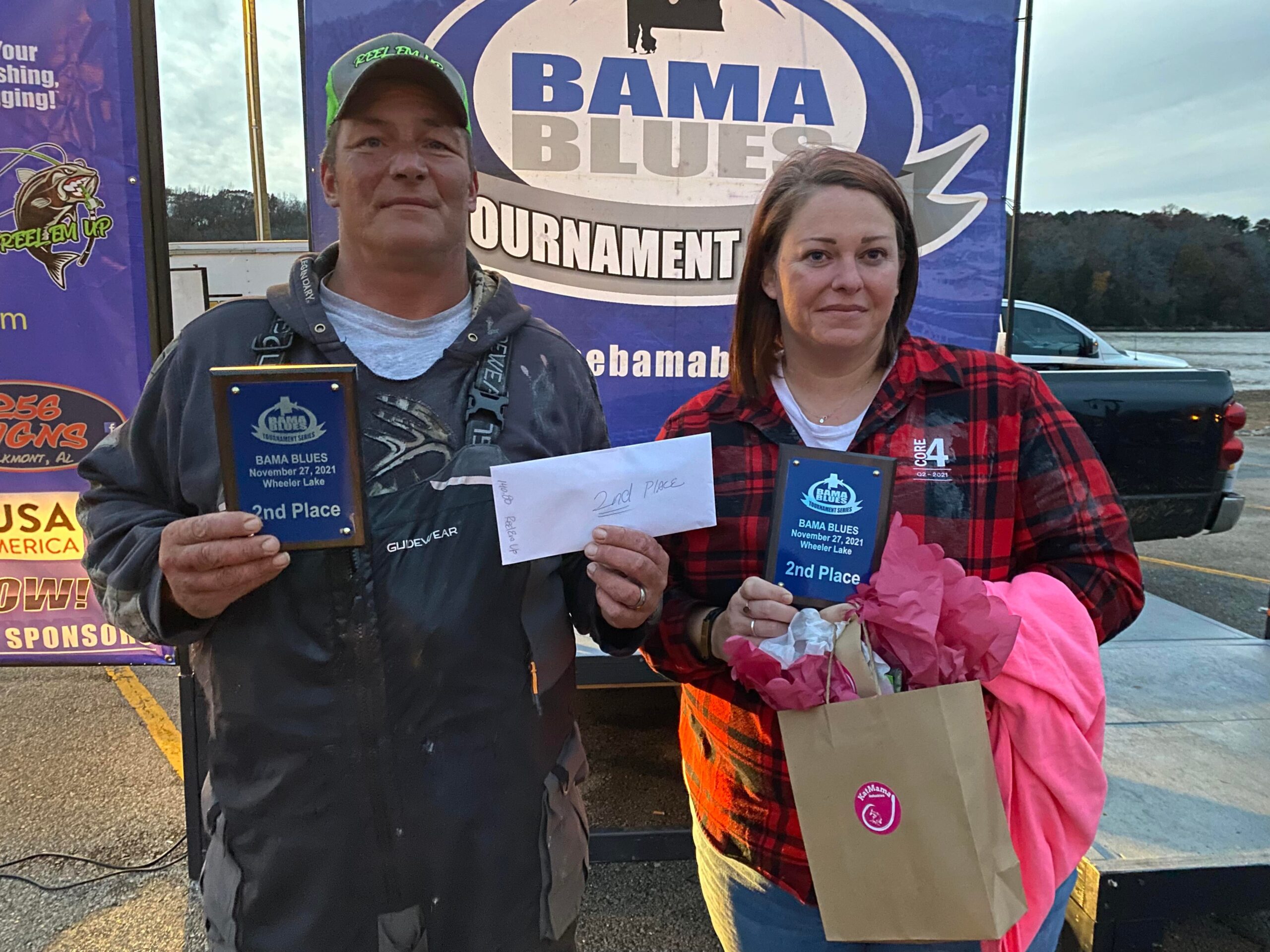 The runner-up spot went to Ron Goucher and Amanda Presley with an ever so close weight of 140.80 to claim the second-place spot. Yes, just .05 pounds separated the first and second-place team.

Amanda was filling in for Goucher’s regular partner, Danny Ball, who could not make this event. Their finish was strong enough to give Goucher and Ball the top spot in the 2021 points race for the Bama Blues tournament series and Amanda Presley received the Top Female Angler award sponsored by KatMama Industries. 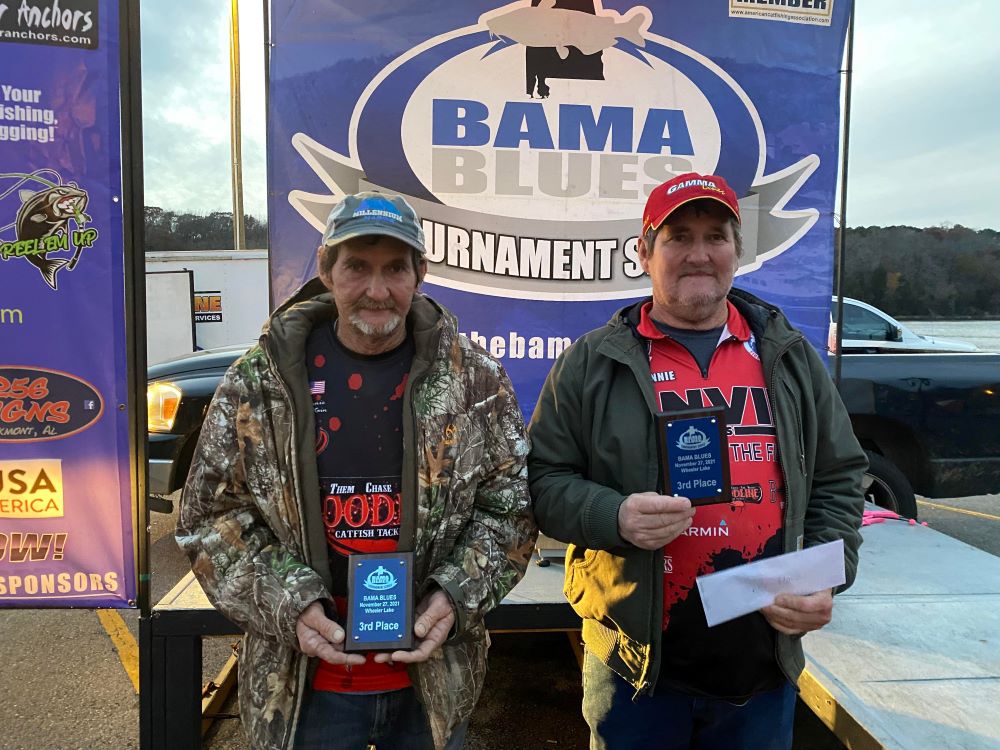 Third place went to the brother team of Lonnie and Donnie Fountain. They weighed more than126 pounds for the third-place finish.

Donnie and Lonnie were above Decatur where they anchor fished all day using skipjack for bait. They had a good early bite.

“We fished upriver from Decatur,” continued Donnie. “We got our big fish before we even got set up good. It weighed 65 pounds. We caught 6 fish on the day. Culling resulted in the three biggest weighing 126 pounds.” 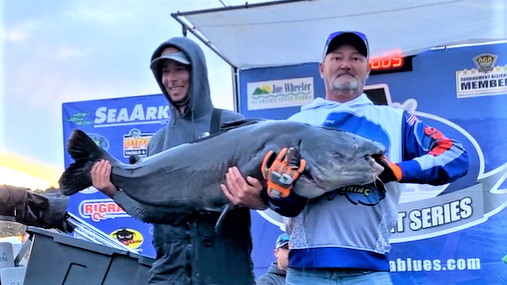 Putting in the work helped Aaron Churchwell and Chad Bryant earn the Big Fish honors. They teamed up to bring 119.35 pounds to the scales including the Big Fish that weighed 79.60 pounds.

“We went out the day before the tournament and scanned for structure in the Decatur area,” reported Churchwell. “We planned on staying on the rope all day fishing tight to timber.”

Churchwell and Bryant had actually seen a fish of the same caliber on Friday. It was in the logjam where the team caught the big fish on tournament day. They caught the fish early so their challenge became taking care of the trophy fish.

“It was about 8:25 am,” recalled Churchwell. “We anchored up on that same jam and by 8:30 Chad’s Hellcat was letting the drag rip. We got a good look at him about 5 minutes into the fight but he wasn’t gonna give us a chance to net him for about 15 minutes. We knew we had a good shot at big fish but we knew we had a chore keeping a fish that big alive all day.”

The team was not equipped with oxygen, but Churchwell had just built a new livewell in the boat. Given the cooler air and water temperatures, the team kept freshwater pumped into the livewell and left the recirculating pumps running all day to keep the trophy blue well cared for.

Final Thoughts
Other year-ending recognitions were presented at the event. As mentioned above, the 2021 points champions were Ron Goucher and Danny Ball. The biggest fish of the year went to Chad Bryant with a 92-pound whopper that came from Wilson early in the year. The youth angler of the year award went to Jocelyn Hoalt who fished with her dad Brad Hoalt as Team Exist Outdoors. They also finished second in the 2021 points race.

Chris and Cory Ramsey will now turn their attention to the Bama Blues 2022 out of Decatur, AL on January 1, 2022. The event features a $50,000 payout based on 150 boats. Registration is capped, so don’t delay your registrations. It is open now at https://www.thebamablues.com/registration.