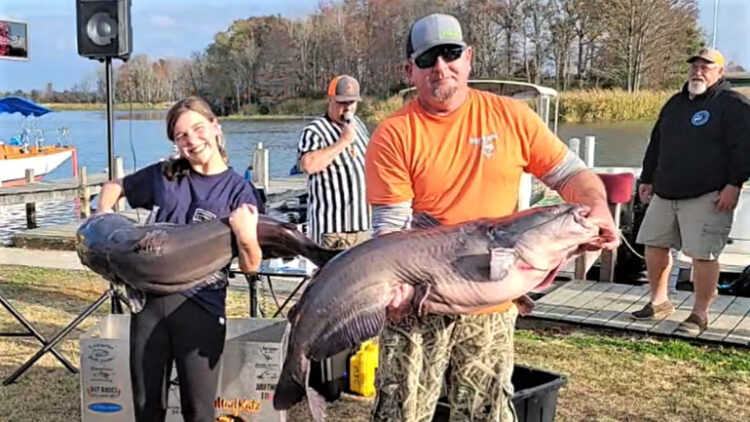 Since its inception in 2017, the Black’s Camp Big Cat Shootout quickly became a tradition on the Santee Cooper lakes. Catfish anglers enthusiastically anticipate the annual event.

Kevin Davis, the owner/operator of Black’s Camp, continues to bring the annual event to South Carolina. The event is a high stake, 100% payout, trophy catfish tournament. Angler registration is $500 per team.

Tournament guidelines allow 2 fish per day in the 2-day tournament. Fifty dollars of the entry fee goes to the Big Fish pot and a small amount supports the polygraph. Anglers were allowed to fish from 6:30 am to 3:30 pm each day.

Winners were determined by the heaviest weight of 4 fish after 2 days of fishing at the December 10 and 11, 2021 event. The tournament is directed by Ralph Willey, assisted by his wife Tonja Elliott Willey. Mark Coburn served as weighmaster and welcomed the anglers to the scales both days.

“It was two totally opposite days of fishing,” reported Coborn. “Day one anglers faced 50-degree temperatures and a steady rain beginning around noon. There was almost no wind and very calm waters.”

“On day two anglers experienced sunny and warm conditions,” continued Coborn. “There was a steady wind of about 10 mph. Air temperatures reached the mid 70’s to set up a beautiful and productive final weigh-in with lots of big fish.” 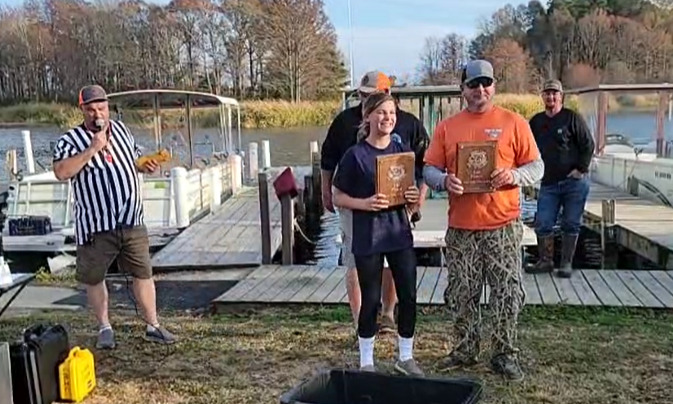 The top spot at the Shootout went to Jason Wolfe (Jason Wolfe Guide Service) and his daughter Paisley who he refers to as his lucky charm. They teamed up to bring 183.68 pounds to the scales and earn the first-place check. Their bag included the Big Fish of the tournament at 58.45 pounds to add to their payday.

On day one the team had a bag of 76.18 pounds which included a big fish of 49.28 pounds. That first-day performance had them setting in 4th place going into day two. Fortune was with them on day two as they add 107.50 pounds to their total weight. The day two bag included the 58.45-pound blue that took Big Fish honors.

This was Paisley’s first big tournament. At 12 years old she was a competitor to be reckoned with. Nothing can beat youthful enthusiasm and she became a quick favorite with a lot of people pulling for her and her dad. Even with the 49 pounder on day one and the 58 pounder on day two, neiter was her personal best.

“The weather was different each day,” reported Jason. “We drifted all weekend in a creek channel about 20 feet deep. When we had good wind we drifted sideways. When we didn’t have wind we trolled. We were pulling big gizzard shad and perch.”

“Paisley reeled in all the fish,” added Jason. “I was the net man.”

After they weighed in Paisley and Jason were assigned to the “hot seats. Paisley appeared a little nervous as they wait to see if anyone would beat their weight.

“She was nervous,” said Jason. “She wanted that big fish trophy.” 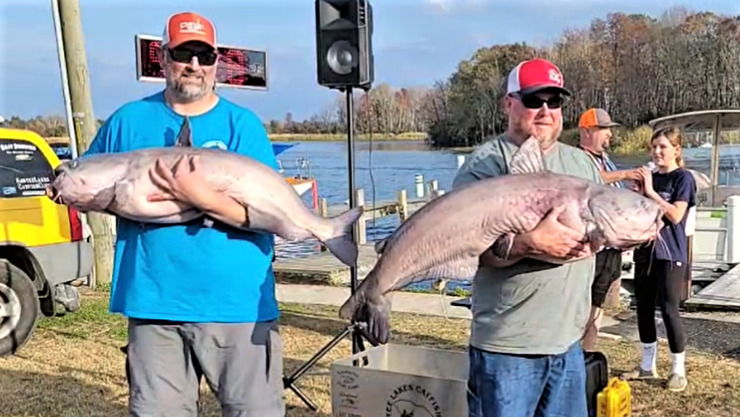 The runner-up spot went to Team Catastrophic Failure (Brad McCall and Mike Durham). They teamed up to bring a two-day total of 149.67 pounds to the scales.

McCall and Durham were setting in 11th place after day one with 57.39 pounds. Given their past performances at the Shootout, it was no surprise to see them make a huge comeback to pull off the second-place finish on the final day of fishing. They now have one 1st Place win, two 2nd place wins, and one 3rd place win at the Shootout.

“The day one weather was off and on rain,” recalled McCall. “The high temperature only reached into the upper 50’s with light winds. We fished in 12-20 feet of water pulling planner boards on ledges around the northern Bonneau area. We used 8-10 inch gizzard shad and white perch for bait to catch 8 fish. Our biggest day one fish was 34 pounds.”

Day two weather was much more accommodating for Team Catastrophic Failure. They had sunny skies with temps in the 70’s. The SSW wind at 5-10 MPH worked well for them on Lake Moultrie.

“We went to the lower end of Lake Moultrie on Saturday,” continued McCall. “We were targeting 30-40 feet of water. Drifting big gizzard shad and white perch on ledges worked for us. We used Easterlin Drift Socks to slow us down. We caught our big fish around 9:30 am. It was 54 pounds.”

The team reported a slow bite until afternoon when the fish turned on. They had a triple with 5 minutes remaining before time to head back to weigh-in. The three fish weighed 38, 34, and 25 pounds. After culling two fish over 30 pounds Team Catastrophic Failure raced back to the scales.

“I really would like to thank Mad Katz Gear,” concluded McCall. “They provide us with some great rods and terminal tackle to fish with.” 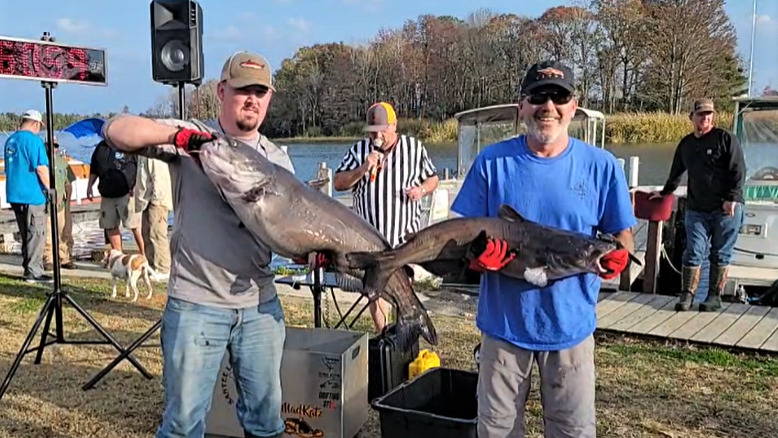 The team traveled on Wednesday night to put some time into catching bait and then do some prefishing.

“We got there Wednesday night and went and caught fresh menhaden,” Bishop said. “On Thursday we prefished for 2 hours. We were drifting ledges with shad and menhaden. We caught a 36 and 55 really quick so we quit fishing and went to catch some perch which we found in 40-plus feet of water.”

Bishop and Pence began day one of the tournament on the rope and shallow. They caught a 20-pound blue before moving out to some ledges on the channel. The wind was so calm they had to use the trolling motor to drift.

“We caught a 36-pound blue soon after making the move,” recalled Bishop. “We fished hard the rest of the day. About 2:30 pm we had a rod peeling drag and the planer board disappeared. With expectations of a good fish, it came off after reeling down on it.”

They continued to fish as quitting time approached. At about 2:55 pm they started reeling rods in to call it a day. With two rods in, a third rod started screaming.

Day two was very foggy to begin with, as Bishop and Pence started drifting ledges very early. By 8:30 am they had a 41-pound blue in the boat. Soon after that, they added a 20-pound blue.

“About mid-day, after the wind got rough, we came upon a ledge drifting,” Bishop said. “We had a middle rod with a big perch get slammed. It started peeling drag. Les reeled down and pulled back but he came loose. We reeled the bait in and the fish had bit the big perch clean in half. It was a big fish.”

“We fished hard the rest of the day but couldn’t get anything bigger,” concluded Bishop “I want to thank our sponsors, Monster Rods by Tangling With Catfish, Mondocat Rods, Excel Boats, RS Nets, Monster Rod Holders, Hills Landing (where we stayed) and Blacks Camp for staging the tournament. And finally, I want to thank my partner Les Pence.

Epilogue
Another big fish show-out on Santee Cooper has anglers already talking about next year and other events coming up on the popular lake. Many make their lodging reservations way in advance just to be sure they have them. The Shootout will take place again in December 2022.

Parties interested in sponsorship opportunities at the 2022 Shootout or Santee Lakes Catfish Club events can contact Ralph Willey at 843-200-3108.