When the Trophy Catfish Came 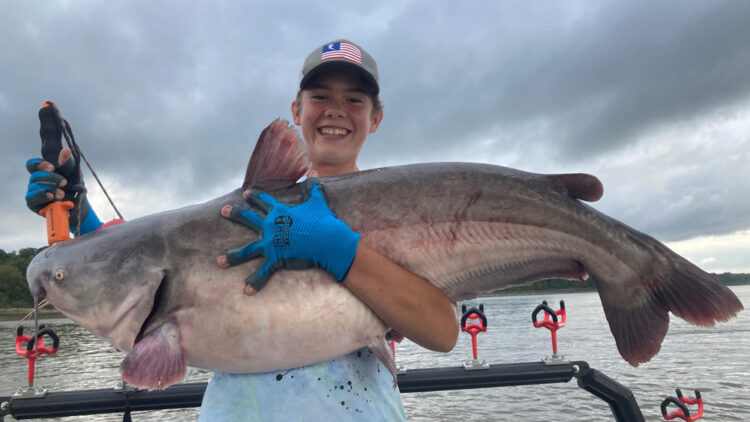 The Moment the Struggles Paid Off

How tournament fishing led one family to a catfish addiction.

I’m not entirely sure what drew us to it. Perhaps it was living most of our lives within 20 miles of the Mighty Mississippi – yet I had never availed myself of its rich resources as a world-class fishery.

Like a lot of folks from my generation, I had grown up watching Bill Dance, Roland Martin and Jimmy Houston show me how to rig a plastic worm Texas-style on their weekly TV shows. I took the tips and tricks I learned out to our local ditches and creeks and would oh-so-carefully snake an electric-blue worm with a curly firetail along a half-submerged log until I enticed a 2-pound largemouth to glide out from its hiding place and engulf it.

Those forays though were long since in my past, and now I found myself yearning to get out on those mysterious waters that flowed wide and deep in the huge channel that separated Illinois from Missouri. My wife and I looked around for a boat that would provide some family fun and be capable enough of handling the huge eddies, swirls and currents of the Mississippi, and landed on a SeaArk EasyCat.

We learned of a catfish tournament trail that came to Cape Girardeau, close to where we lived. I took my son Gabe to enjoy the festivities. Watching the behemoths get weighed in at the day’s end settled it. We were going to do this.

We entered the next year’s Twisted Cat event under the grassroots banner they offer. It was a “beginner” division that didn’t cost as much, but still let us play the game. We came back at the end of the day empty-handed. Still, there were a lot of monsters brought to the scales. That let us know just how much we needed to learn.

It seemed as though “bumping” was the thing to do on the Mississippi. I liked the concept for a couple reasons—it allowed us to cover a lot of water, and it hearkened back to my childhood days of presenting a bait in front of the fish instead of just waiting for them to come find it.

My youngest son was the first of us to catch a catfish using that technique. It took several days of fishing to accomplish. Then it didn’t happen again for quite a while. We kept wondering if we were doing everything correctly.

We kept grinding away. Gabe and I were on the back of the EasyCat one afternoon as I was focused on cutting up yet another skipjack to keep fresh bait in the water. Out of the corner of my eye, I saw him stumble forward. Turning my head slightly, I focused on his rod doubled over and noticed him catch himself with his foot against the livewell. I was thinking to myself that he was hung up just as he said the words every fisherman loves to say, “I got one!”

There was no doubt that this was a different caliber of fish. Gabe reeled, but made little progress. We quickly checked his drag to make sure it would feed line out on the inevitable big surges to come. Slowly… he gained ground. He looked at me with a big grin and said what we both knew, “This is a good one.” I watched line peel off the Okuma CW-454D he was holding—and the grin spread even wider, if possible.

After several minutes, I looked down and saw the braided line getting dangerously close to the submerged prop on the big Suzuki and encouraged Gabe to guide the big fish away from its sharp edges. He leaned all 115 pounds of his 14-year-old frame against the Big Cat Fever bumping rod and yelled out “I can’t move him!” Fortunately, whether it was due to the pressure he was applying or simply because the big fish decided he wanted to go a different direction, he swam away from the blades and back out into open water.

I sat the iPhone down that I’d been recording the fight with and hurriedly ran to the front of the boat to retrieve our dip net, instructing Gabe to move closer to the cockpit area of the boat. Now I would have room to stand behind him to net the fish, downstream of him. We’ve found it much easier to come at the fish from that direction.

Gabe finally brought the fish to the surface, and neither of us were disappointed. I slipped the net beneath it on the first try, and we turned and high-fived each other immediately. I lifted it up and over the gunwale of the boat and we both simply stared in awe as it rested on the floor. Usually, the big Hydro 150 net makes fish sitting in it look small, but not this one.

I helped lift the 50-pounder into Gabe’s arms, and took several pictures to commemorate the event before slipping the fish back into the water. I let him grab it by the mouth and hold it so current would move through its gills until the fish started shaking its head and thrashing its tail; he let go and we watched it swim back to the depths it came from, hopefully to be enjoyed by another angler another day.

Thanks to those in the catfish community who’ve been patient as I picked their brains, and especially for those who’ve been willing to take us under your wings and personally show us the ropes.

We’ve had such icons as Daryl Masingale offer tips, and Chris Stout took us out for an entire day on his boat. Chris Souders invited us to fish his home waters on the Ohio River for an entire weekend, and we owe much to a local guy named Justin Borgfield that’s making a name for himself on the Midwest tournament trail. We are deeply indebted to those and countless others for their help and advice.