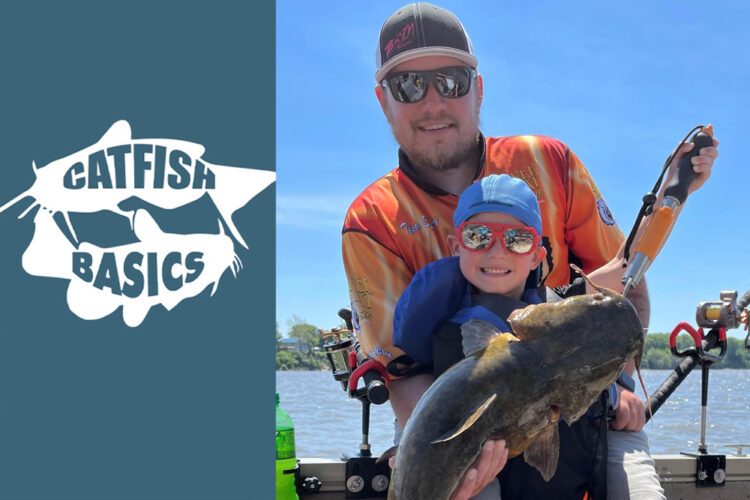 Easton Emery is the son of B’n’M Poles pro staffer Tyson Emery. At 5-years-old, Easton is an eager catfish angler. He loves catching them and taking pictures with them. He took his first catfishing trip with his dad when he was two years old.

In a recent interview, Tyson revealed his simple strategy for turning Easton into a young catman.

“I take him to all my honey holes,” joked Tyson. “I don’t want him to get bored. There is a lot of energy built up in a 5-year-old. LOL.”

Understanding that it’s best to keep young anglers busy, Tyson treats Easton a lot like any other angler on the boat. Safety is one area where he applies a little more restraint and consideration of his age. Weather is important to any angler, but more so when young anglers are involved and safety is a must.

“I check the forecast to make sure the wind isn’t going to be bad,” explained Tyson. “I also want to avoid the chance of lightning. If it is in the forecast we are not likely to go. Being safe is more important than fishing.”

As far as rigging is concerned he doesn’t make any changes. With flathead fishing, for example, he ties up a Caroling rig with a Demon Dragon float and pins on some live bait.

“I prefer live mooneye or shad,” said Tyson. “But gills work also. I use my medium/heavy B’n’M SilverCat Elites and throw out some big baits. I don’t do much different because I am hoping for the big boys for him! We just leave the Elites in the rod holder and he does his thing. Never had a problem.”

Editor’s Note: Easton Emery is the CatfishNOW December 2021 Cover Boy. He is very excited about catfishing and eager to learn more.