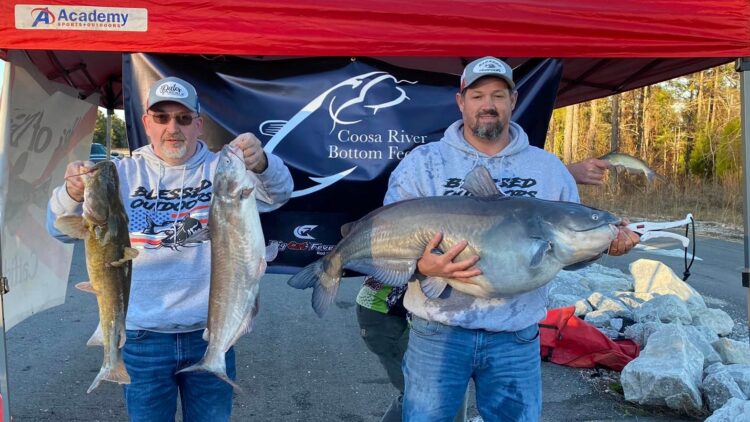 Georgia and Alabama fought it out for catfish bragging rights
on Weiss Lake.

Bragging rights were on the line recently on the Coosa River at Leesburg Landing. Members of the Georgia-based Coosa River Bottom Feeders and the Alabama-based Heart of Dixie Catfish Trail fought it out on Weiss Lake to see which state could bring in the most weight and boast about it for the next year.

“Anyone from Alabama or Georgia is welcome to come,” added Cody Chambers, director of the Coosa River Bottom Feeders. “We had 11 teams from Alabama and 9 teams from Georgia this year.”

Both trails are members of the ACA Tournament Alliance. Through this affiliation, participating ACA member anglers have the opportunity to add a chance at winning a new SeaArk Boat and points towards winning all sorts of cash and prizes!

The event is a 5-fish tournament with winners determined by individual team weights. The team weights are then totaled for each state to determine bragging rights for the next year. The winning team receives a Championship Belt to mark the achievement. 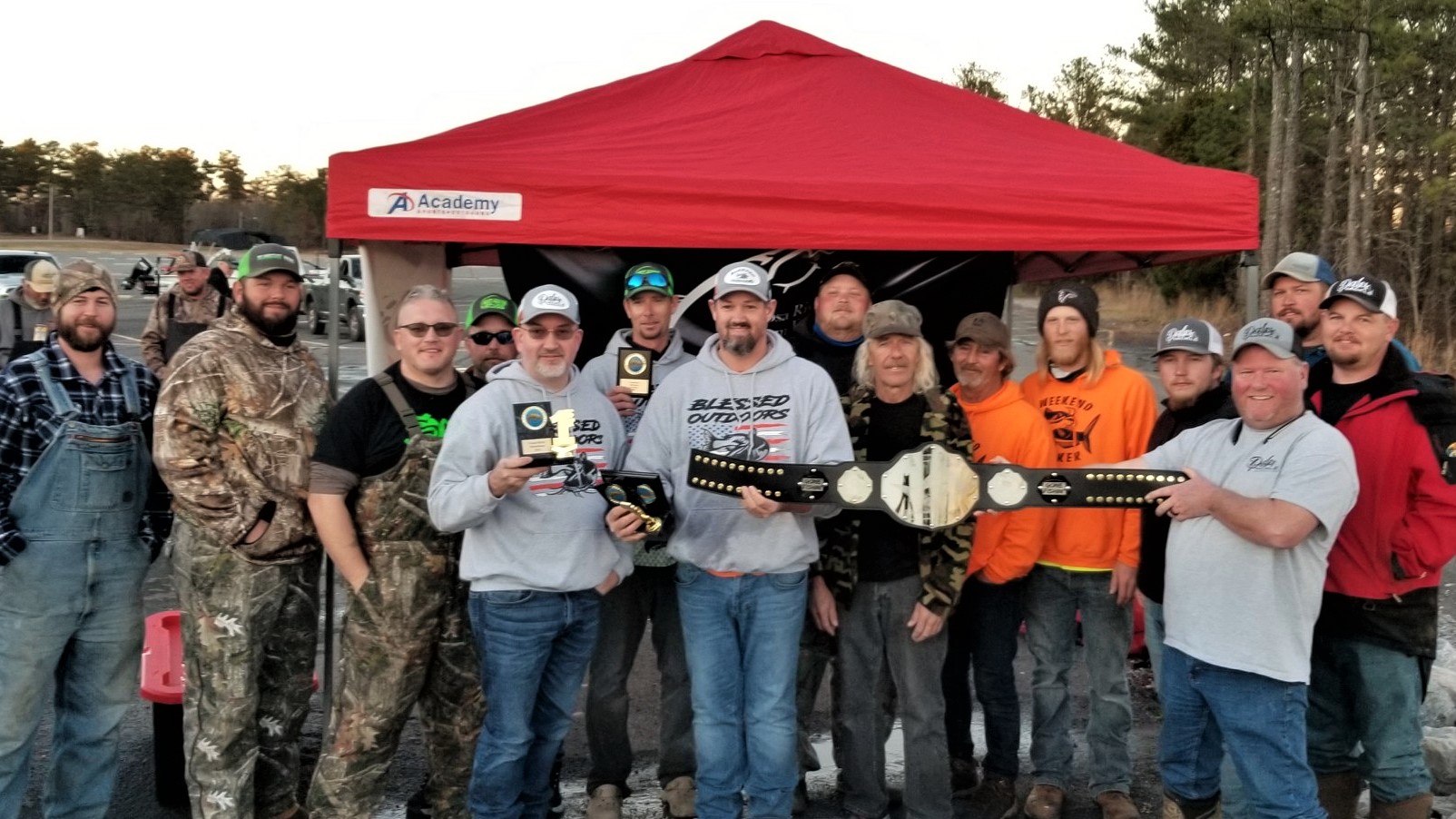 Georgia took the title in 2021 so they are now setting in the Cat Bird Seat where they have the upper hand to praise their catfishing prowess and slam the Bama boys until they can prove differently.

The top spot in the tournament went to the Blessed Outdoors team of Nathan Trammel and Robbie Brewster. They teamed up to represent the Georgia team that ended up taking the Championship Belt.

The day started slow for the Blessed Outdoors team. They had multiple dink bites but nothing for the box even after moving 3 times.

“On the third move we finally caught a fish,” reported Trammel.  “That first fish, a 10-pound blue, came about 9:30 am. Shortly after that, I caught an 8-pound flathead.”

He followed that with a 4-ounce channel cat. Yep, that is not a typo. Given that it was a 5-fish tournament and it was going slow, the little guy went in the box. They continued fishing, trying several more spots with no luck.

“I told my partner we had to make a change in how we were fishing,” recalled Trammel. “We had been anchor fishing the main channel so we moved to a flat in a bend of the river. It had a creek arm coming into the river channel.

Trammel and Brewster broke out the planner boards and dragging weights. They began dragging baits across the flat parallel to the creek.

“After about an hour we had several bites but no takers,” explained Trammel. “Then it happened. My right side pole went down and started ripping drag. The planner board was skiing across the water to the left. This fish ran so hard it turned the boat around sideways.”

To their surprise, about 10 minutes into the fight, they netted a 53-pound blue cat. That is a big fish for Weiss Lake. It was the last fish they would catch for the day. When the fishing time was up, they headed to the scales one fish short of the 5-fish limit.

“We headed to the weigh-in with only 4 fish, really 3 and a half,” joked Trammel. “We were not sure where we would place. We pulled up knowing that we had 1 good one. I pulled the small one out first.”

The weighmaster put the tiny channel cat on the scales and it registered 4 ounces. Everyone was laughing and smiling at the size of the fish.

“Then I pulled out our big fish,” concluded Trammel. “Everyone was surprised after seeing the little one. “We had a total of 73 pounds with Big Fish of 53 pounds. It was enough to take the win and Big Fish. The state with the best total weight wins the belt and bragging rights for the next year so Georgia won by about 24 pounds. It was a fun tournament.”

The runner-up spot at the Shootout went to Mark Hulsey and Chris Clark. They teamed up to represent the Alabama side came up with a strategy that netted them 2nd place.

Hulsey and Clark fished on the rope all day long. They reported marking fish in various depths of water on a slow day of fishing.

“It started out a little cool,” commented Hulsey. “I think the weather caused the bite to be slow. We anchored all day and were marking fish from 20 feet of water to 50 feet. The first two we caught were in 25 feet of water in the river channel.”

The team used local favorites of drum, bream, and redhorse suckers for bait. They said the few bites that they got were on the heads. Hulsey praised his Sanders Creek custom rods for their ability to land big fish.

“This was my first Shootout tournament,” concluded Hulsey. “It was fun. Everyone was having a good time talking trash.”

Aaron Churchwell (Partners in Slime) and Robert Thomas (The Confrontational Catfisher) represented the Georgia side. They brought enough weight to the scales to earn a 3rd place finish.

“The weather had a huge effect on the bite,” suggested Churchwell. “The day before the tournament we had warm temperatures and that big thunderstorm rolled in with the cold front right behind it. It’s always hard fishing the first day of a cold front.”

It was a challenging day for the Georgia team. Not only did they experience a tough bite they found a little shallow water that wouldn’t float the boat.

“There was pretty much no morning bite,” recalled Churchwell. “After trying a bunch of different stuff we finally decided to make a change. About 11:00 am we ran up the river. We caught all 5 of our fish targeting slough mouths. Our fish came from water that ranged from 1 to 15 feet deep on redhorse suckers and shad.”

“We took a gamble and made a long run that paid off for us,” added Thomas. “The majority of our fish came late in the day as that gamble paid off. Our biggest fish, 24 pounds, came from less than 18 inches of water.”

“Weiss is a very shallow lake outside the river channel,” warned Churchwell. “On our way back to the ramp I got a little out of the channel and ended up in about 8-inches of water. We were able to get out and push the boat off the mudflat but that water is cold at 51 degrees!”

“Bobby turned that Mercury into a mud motor,” joked Thomas. “We ended up doing a Polar Plunge and pushed the boat off the flat and made it back to weigh in on time.”

“Adam and Cody put on an awesome event,” concluded Churchwell. “We are just glad that the Georgia side got to bring the belts home this year.”

Epilogue
The Alabama vs. Georgia competition is over for now, but they will meet again next year. The winning trail director holds the belt until next year so it will be housed with Cody Chambers. The trash talk will likely continue and you can rest assured that the Alabama anglers are plotting to take it back next time.

The Heart of Dixie Trail has over 100 members and is a yearly trail that holds events through much of Central and North Alabama along the major river systems of the state. They are a non-profit trail. The yearly membership is $10 and covers equipment and special event prizes throughout the year.

The Coosa River Bottom Feeders began as a Facebook group. They now have 2.3 thousand members. As interest grew the group transition into a tournament trail. They are based out of Rome GA and cover most of the Coosa River for tournament fishing. They plan to hold a couple of events on the Tennessee River in 2022. They have been running tournaments for 4 years now. There is no membership fee and no preregistration. Interested anglers simply show up with an entry fee to compete.

The Coosa River Bottom Feeders will begin the 2022 season back on Weiss Lake on January 8, 2022. Check their Facebook page for details and other upcoming tournaments.

The Heart of Dixie Catfish Trail has not posted its first event for 2022 as of this writing. Follow them on their Facebook page for more information.